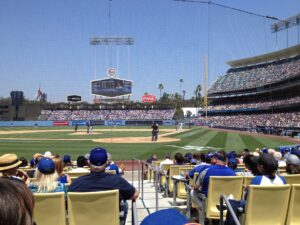 I miss a packed Dodger Stadium in the bottom of the ninth, the fans on their feet, stomping and screaming and willing a hit.

Or the Hollywood Bowl on a summer evening, be it jazz or Beethoven, as long as I’m there with my wife, a bottle of wine, and lots of people.

How about a Broadway theater? Nothing like being front row, center, for a hit like Chicago with the legendary Gwen Verdon (as I was one night long ago.)

Heck, give me Langer’s Deli at lunchtime as I munch their famous #19 pastrami on rye, with the chatter of random conversation all around me.

I miss the bustle of the streets in downtown L.A. and midtown Manhattan. Now those places look like something out of I Am Legend.

Will crowds ever come back? Will people ever rub shoulders again without masks or hypochondria?

There’s a split of opinion on this. In a post that went viral, investor James Altucher says the New York he loved is dead, and will not rise from the grave:

Now [NYC] is completely dead. “But NYC always, always bounces back.” No. Not this time. “But NYC is the center of the financial universe. Opportunities will flourish here again.” Not this time.

“NYC has experienced worse”. No it hasn’t.

A Facebook group formed a few weeks ago that was for people who were planning a move and wanted others to talk to and ask advice from. Within two or three days it had about 10,000 members.

Every day I see more and more posts, “I’ve been in NYC forever but I guess this time I have to say goodbye.” Every single day I see those posts. I’ve been screenshotting them for my scrapbook.

This sentiment rubbed one Jerry Seinfeld the wrong way:

There’s some other stupid thing in the article about “bandwidth” and how New York is over because everybody will “remote everything.” Guess what: Everyone hates to do this. Everyone. Hates.

You know why? There’s no energy.

Energy, attitude and personality cannot be “remoted” through even the best fiber optic lines. That’s the whole reason many of us moved to New York in the first place.

You ever wonder why Silicon Valley even exists? I have always wondered, why do these people all live and work in that location? They have all this insane technology; why don’t they all just spread out wherever they want to be and connect with their devices? Because it doesn’t work, that’s why.

Real, live, inspiring human energy exists when we coagulate together in crazy places like New York City. Feeling sorry for yourself because you can’t go to the theater for a while is not the essential element of character that made New York the brilliant diamond of activity it will one day be again.

I get the part about energy. As a writer who spends quite enough time alone at the keyboard, I love the electric current of crowds. Sometimes I want people around me—people I don’t even know, people who are just there at the coffee house, the park, the restaurant, the beach. There’s scientific proof (“The science!”) that such activity is an aid to creativity.

Yeah, I can fake it a bit with Coffitivity. But that’s no substitute for the vibe of a crowded ITW bar (especially when Gilstrap is present). I want to be able to sit in NY’s Bryant Park at twilight, and people watch. I want to nosh chop suey in L.A.’s Central Market at noon as the life of the city churns around me.

It would be nice to someday see faces again, too.

Alas, even when large halls and stadiums finally open up, they’re sure to be tightly regulated. (The power to tightly regulate is a drug not easily kicked.) In anticipation of this, I’ve composed a new song to sing at Dodger Stadium during the seventh inning stretch:

Take me out to the ball game,
Take me out with the few.
Buy me some peanuts and Handi Wipes,
Keep me away from the talkative types
As I root, root, root in my face mask.
To sneeze or cough is a shame.
So stay six, eight, ten feet away
As I watch the game!

Do you miss crowds? Think they’ll ever come back?