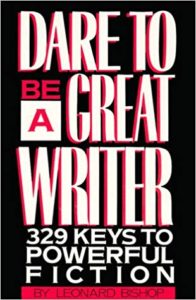 Back when I decided I had to try to become a writer (even though I’d been told you can’t learn how to do it, that you’re either born a writer or not, and sorry, bud, if you’re not) I joined the Writer’s Digest Book Club. I had to see if I could learn, because the desire to write had come back into my life like a long, lost love.

Behind me in my office is a floor-to-ceiling bookshelf stuffed with my beloved writing books, a goodly portion of them purchased from WD. I thought it might be fun, from time to time, to look back at the early lessons I picked up during my unpublished days. I’ll look not only at the books, but also the several binders of Writer’s Digest magazines which I devoured each month. The underlines, highlights and sticky notes are like an archaeological dig into the formation of one writer’s mind.

One of the first books I got from WD was Dare to Be a Great Writer: 329 Keys to Powerful Fiction by Leonard Bishop. Bishop was an old-school fiction writer in the naturalistic style of James T Farrell. He also did a lot of teaching and editing. I ordered the book because I thought, Wow, 329 keys! I better get cracking!

Something funny about the book—there is no order in the material. It’s a collection of short selections that hop around between plot and characters and scenes and openings and point-of-view and the publishing business and so on. There’s an index which categorizes the subjects for you, but I happily got out my highlighter and sticky notes and read the thing from cover to cover.

It’s so much fun to look back to see what stuck out to me. For instance, on page 39 I highlighted the section called Details of Setting, wherein Bishop writes, in part, “Details of setting should be incorporated into the activity of a character. When details are put down separately from the character, they either intrude, slow the pace, or take the focus away from the character.”

Bishop then, as he does throughout the book, gives examples of how to do it, and how not to do it. And boom! I had learned something about the craft of fiction that I could immediately put to work to make my stuff better. I learned it because someone taught it to me in a book.

In the middle of Dare to Be a Great Writer I have a sticky note next to the heading Avoid Repetitious Settings. Bishop says, “When rewriting, be alert for a repetition of setting. This repetition quickly reveals that the writer has been lax in his use of invention or is uninformed about the time in which the characters are living. To avoid this, list the settings you have already used and determine how often you have used them.”

Apparently I got the message, because just the other day I was writing a scene in a restaurant. I moved the characters outside to a hot dog stand where there is more activity going on. And now I realize that move was probably put in my head thirty years ago by Leonard Bishop.

But even more interesting, to me at least, are my own notes scribbled on the blank flyleaves of Bishop’s book. I added 14 more “keys.” These were things that occurred to me as I wrote my own pages or when I noticed what another author did in a novel.

I even numbered them according to Bishop’s scheme. For instance, #330, my first note, says Turn the Cliché 180°. I jotted an example of a man and woman going fishing, with the man being skilled and the woman being clumsy. Switch the roles, I wrote.

#332 is Close Your Eyes When Typing. Especially good for description. Capture the scene.

My last note , #343, says: In first rewrite, take out as much info in opening chapters as you can, in order to make it move and be more mysterious. Fill in the info later. TKZ regulars will recognize this as my later formulation, Act first, explain later. It first occurred to me back around 1990!

What I remember most about Dare To Be A Great Writer is the excitement I felt every time I opened it up. I wanted to be a great writer. Here was a book that was filled with the how. I’d wasted ten years believing the Big Lie that you can’t learn to write fiction. This book dared to tell me I could.

What is one of the earliest writing lessons you picked up? Where’d it come from?