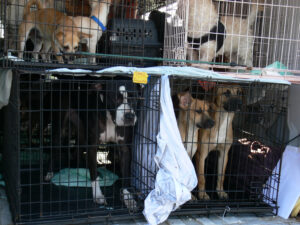 After the past six months, raise your hand if you’re ready for a feel-good story.

The following is a true story—the journey of one stray dog from certain death to happily-ever-after with plenty of bumps along her odyssey. It encompasses important elements of story structure that are necessary in both fiction and nonfiction. It includes many heroes who embody a never-say-die spirit of determination. The inciting incident introduces a daunting mission with high stakes. The antagonists take the form of plot reversals and seemingly insurmountable hurdles. All these elements eventually lead to a satisfying climax and conclusion.

Recently, I was privileged to participate in this story as an assignment for Montana Senior News.

The protagonist is Pretty Girl. No one knows her origins. Her age is estimated at three years. A guess at her lineage is pit bull-boxer cross. Pregnant and starving, Pretty Girl is abandoned on a Beaumont, Texas road by a villain who is never identified.

Like Pretty Girl, Gary’s life has not been easy. Born with congenital developmental disabilities, he nevertheless works hard and supports himself with city and county jobs including maintenance of school buses as well as a lawn service business on the side. When his wife of 39 years dies in 2015, Gary is adrift and lonely, even with his large extended family nearby.

He takes in the skinny, sickly stray and calls her Pretty Girl. Two thousand dollars in vet bills later, she is cured of heartworm, puts on weight, gives birth to her puppies then is spayed. All pups find homes except for one, which Gary keeps and names “Remy.” Mother and daughter become Gary’s steadfast, loyal companions. 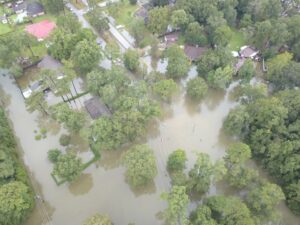 In 2019, they undergo a plot reversal when their safety is threatened by Tropical Storm Imelda that drenches Beaumont. Gary’s home is flooded. Rescue workers find him, Pretty Girl, and Remy atop his bed, surrounded by nearly three feet of water.

They survive, recover, and rebuild. But Gary’s health declines and relatives urge him to move into assisted living. He refuses out of loyalty to his dogs. If Pretty Girl and Remy can’t go with him, he isn’t going.

Then a catastrophic plot reversal upends Pretty Girl’s life. Gary dies this past July at age 70.  Pretty Girl and Remy lose the only home they’ve ever known. Remy is adopted but, despite Pretty Girl’s sweet, loving temperament, she remains a homeless orphan who misses not only her human but also her daughter.

Enter two heroes in the characters of Gary’s sister, author Debbie Epperson (my longtime friend and critique partner), and her husband Nathan who agree to adopt Pretty Girl. But that introduces a whole new obstacle: how to transport a 63-pound dog from Beaumont, Texas to Kalispell, Montana more than 2100 miles away.

Enter more new heroes, strangers who don’t know Pretty Girl or the Eppersons but are united in a commitment to help animals in trouble.

Dozens of emails fly over the Milk Bone Grapevine, reaching out to volunteers and rescue groups, asking for transportation help.

Meanwhile Pretty Girl is temporarily boarded. Every ride in a car means a trip to an unknown, unfamiliar destination: sometimes a vet’s office, other times to foster care. Strange people, strange dogs, and uncertainty surround her. Yet she retains her sweet personality. Her only flaw is food aggression toward other dogs, not surprising given her rough beginnings.

In Houston, she is handed off to Rescued Pets Movement (RPM). The nonprofit group founded by Cindy Perini has saved the lives of more than 55,000 homeless and abandoned animals that face euthanasia in city pounds and shelters. In addition to providing medical care and rehabilitation, RPM transports animals to reputable rescue groups in far-flung areas where there is a demand for pets.

Pretty Girl joins 126 dogs and seven cats for the 1000-mile trip from Houston to Denver that takes 24 hours.

In Denver, Pretty Girl meets another hero, Edie Messick, founder of The Animal Debt Project (ADP), a nonprofit no-kill shelter located in Wellington, Colorado that also focuses on transporting animals. Every other week, Edie drops off and picks up dogs throughout Colorado, Nebraska, Wyoming, Montana, and Idaho.

Pretty Girl spends eight days at Edie’s shelter waiting for the arrival of rescued strays from the streets of Tijuana, Mexico. They will be her traveling companions on the next leg of her trip.

Thursday morning, Pretty Girl and 27 other dogs, including a diabetic requiring shots and a three-legged pup, are loaded into Edie’s van, turning the vehicle into a combination day care and nursing home on wheels. They travel on I-25 and I-90 for another 1000-mile journey from Denver to Missoula, Montana.

Early Friday morning, Nathan Epperson and I drive 120 miles from Kalispell to Missoula where we rendezvous with Edie to pick up Pretty Girl.

Pretty Girl is panting and understandably anxious since she just spent a day and a night with two barking Chihuahuas in a crate above hers. But her tail wags as she licks our hands, excited and happy.

She doesn’t yet know this is the final leg of her long journey and the climax of her story. But we humans know she’s destined for a new home with a loving family.

In Nathan’s truck, she tries to climb on his lap, making driving impossible. So I sit in the back seat with her, holding her leash. She leans against me and, soon, her panting stops. She’s calm and affectionate. Unlike many dogs under stress, she’s not afraid to make direct eye contact.

When she looks in my eyes, I think she must be wondering: “Are you the one I finally get to stay with?” After weeks of loss, upheaval, strange surroundings, and strange people, I tell her she’s on the way to her forever home. I hope she understands. Taken with my cell phone cam while holding onto a struggling 63 pound dog in a moving truck. Action photography is not my specialty.

She also quickly bonds with Nathan and continues to try to climb in the front with him. I pull back on her leash until she finally settles for resting her head on his shoulder as he drives.

We arrive at the Epperson’s rural property west of Kalispell where Pretty Girl checks out unfamiliar smells of deer and wild turkeys. She meets Debbie (Gary’s sister), two Golden Retrievers, and a cat with whom she’ll share a home. 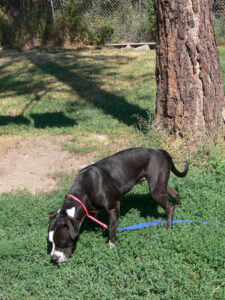 But there’s one last hurdle to conquer: Kemah, the two-year-old Golden is rambunctious and overwhelms Pretty Girl, who growls but doesn’t snap.

Fortunately, Debbie and Nathan have experience wrangling multiple dogs. They know how to ease the adjustment between Pretty Girl and Kemah.

Now it’s time for the denouement of the story. When I start to leave, Pretty Girl looks distressed, as if to say, “Oh, no, another human is abandoning me.”

But I’m consoled later that evening when Debbie emails to say she and Pretty Girl are curled up together on the love seat, watching “Murder She Wrote.”

A new crime dog in training.

And they live happily ever after. 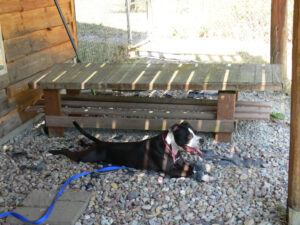 On a hot summer day, Pretty Girl relaxes on cool rocks in the shade of her new home.