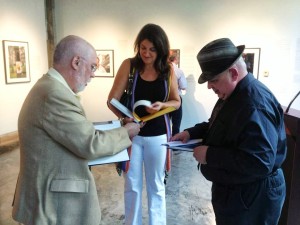 Paint Me Blue and Call Me Stupid, But I Want One

I was in New Orleans and Baton Rouge for several days. The high points of the trip included hanging with my new friend Doug Woolfolk, who very kindly took time out of his extremely busy schedule to give me a tour of the state capitol building, including the hallway where Governor Huey Long was assassinated (or accidentally shot by his own bodyguards, depending on which story you care to believe) in 1935, and to visit Spanish Town, a revitalized neighborhood on the edge of downtown. When I reached New Orleans, I was able to visit with my dear friends Toni McGee Causey, author extraordinaire, and her husband Carl Causey, who may well be among the five most brilliant minds on the planet. Seriously. I also attended a legal seminar, had lunch with video and film director Jason Furrate to discuss a new project, and made some new friends. Oh, and I discovered that Louisiana sells Barq’s root beer by the glass bottle, and it’s different from what they ship in cans to Yankees up north. All in all, not a bad ten days. The downside was that my computer’s motherboard fried on the second night of the trip so that I was reduced to operating my practice and writing by swipe-typing on my smart phone. This is not recommended for those of us on the wrong side of middle age; I am hoping that at some point very soon my left hand comes out of the claw configuration in which it seems to be frozen.

My computer is replaced (it was actually cheaper to buy a new one than to have the old one repaired) and I am busily uploading dis, dat, and de udda to it so this is going to be a short offering this week. So, I’ll take the easy way out and just ask a question: are you going to buy a Kindle Fire, the soon-to-be-released multi-media tablet? Do you want it? Do you need it? To answer my own questions: I am not going to buy one. I might when a 3G version comes out but it really doesn’t do much more than my phone does, from an application standpoint. Do I want one? Yes. Do I need one? No, and hell no. How about you?