Today, my guest is Tom Robinson, an independent publicist (as opposed to an in-house publicist at a publisher) based out of Nashville, TN and representing such great authors as Tasha Alexander, CJ Lyons, Laura Caldwell, and JT Ellison. Tom and I not only share a great love of writers and the art of writing, but we share the same hometown: Pensacola, FL. When we’re not chatting about the state of the publishing industry, we’re comparing lists of favorite places to eat along the Gulf Coast. I asked Tom to cover the basic question of the role of a publicist, a question that continually comes up in the discussion of writing and publishing. 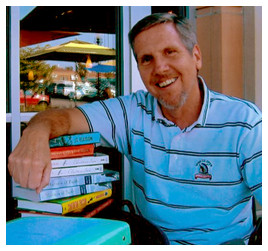 So what does the independent publicist do for an author?

It’s a question which gets asked up front when I talk with an author for the first time. It should always be the first question.

The objective is to promote the book (assuming I’m approached when the author has a new release on the horizon) and the author’s branding so that the name has recognition beyond the new book. Those are the important goals. I said “assuming” the author has a new release. I’m also seeing authors who want to continue publicity efforts while they are between books to stay in front of readers.

But let me get back to authors with a new book.

In a nutshell: from meeting with the author the publicist develops a plan to work from that will outline the use of press material, the engagement of blogs, interviews, reviews, social media, online advertising all geared to the author’s targeted audience. Social media has opened up the publicity avenues by leaps and bounds. It is an extremely successful messenger when used correctly.

The independent publicist is often extending the efforts of the publishing house. In-house publicists are usually juggling several titles. They are often understaffed and burning up long work weeks.

Beyond the plan implementation, it’s essential for the publicist to make follow up contact with targeted media outlets. That’s where so much effort is spent.

When the project is completed there should be a cross section of media coverage.

My job has seen incredible change since I first worked exclusively with authors seven years ago. I think it will continue to change, just as the publishing industry changes. But the goals will remain the same—promote the new book and the author brand.

Tom Robinson is an independent publicist for authors. Located in Nashville, TN. Robinson, a media veteran of more than three decades, works with authors of mysteries, suspense, and thrillers as well as authors of non-fiction and children’s books. He now also has his first cookbook author which is resulting in an expansion of his culinary attempts. You can find him at www.authorandbookmedia.com