Inspired by Joe Moore’s excellent post yesterday on Narrative Voice, I thought about my process for making characters distinct in the worlds I build in a novel. We are all influenced by where we grew up or where we live now, our race, social class,  jobs, friends, religious beliefs, and other factors. Any character an author creates is no different. It’s not enough to picture their outward appearance. Give them a background and sphere of influence. Sometimes it helps for me to hear their voices in my head. (Yes, that’s allowed without taking medication. Special dispensation for authors.)

I recently binged on Sherlock (a la Benedict Cumberbatch) and Sleepy Hollow (British star Tom Mison’s reinvented Icabod Crane). I loved the notion of Sherlock’s brilliant mind leaps and I also loved the idea of a more stilted proper speech of an educated scholarly man similar to the Oxford professor of Icabod Crane, but I wanted my character to be American with a brash punch to him when he wanted to make a point. Those rare moments of punch give him a sense of gravitas and unexpected depth of personality. Being familiar with these TV characters, it became a fun challenge to meld their distinct voices and mannerisms into my American FBI profiler haunted by visions of crime scenes when he sleeps.

It’s amazing fun when you can hear the character voice in your head and write with a good pace, without filtering the words you type on the page. I call this “free association” where you channel the voice of your character without having to think about it. Over the years I’ve gotten better at this, which also comes with a cautionary warning born of experience. Often if you THINK in free association without filter, you will SPEAK that way too. Not always good in a social setting. #FilteringSavesLives

Five Key Ways to Give Your Character a Distinct Voice

FOR GRINS & GIGGLES: I took a little champion New York Times Online Test of 25 questions that analyzed how I spoke to determine where I live. (Best suited for residents of the U.S.) The test came back with a result that I lived in Rockford Illinois, New Orleans, and Rochester NY. Totally wrong since I live and grew up in Texas, but my mother was a Yankee and I’ve lived all over the country, so apparently that has also influenced me.) Take the test and see what your results are. Did they get it right? Let us know.

For TKZ Discussion:
How do you infuse a unique voice to your character? What are your key influences? If you’ve written characters outside your comfort zone, what tricks can you share about how to make that work? 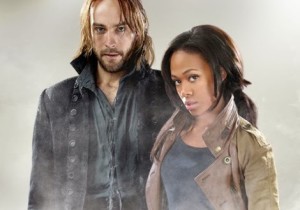 I’ve been watching Sleepy Hollow and consider myself a Sleepyhead, one of many fans who follow the show. We tweet during episodes, quoting lines we love, and mostly talk about Tom Mison, the delectable British male lead who will undoubtedly inspire books in me from here on. But what I’ve found most interesting in the show, beyond the eye candy of Mison, is the daring mix of genres and biblical and literary references. It’s got the flavor of National Treasure (by turning history on its ear with an intriguing undercurrent of conspiracy theories or good vs evil battles) woven into the luxurious velvety fabric of fantasy, mystery, humor, romance, historical, paranormal, and horror. 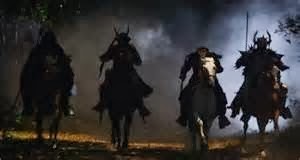 On top of everything else—the cherry on the top–is damned good writing. We care about the characters and what happens to them. They have personal stories we can’t get enough of, along with the good vs evil battle against demons. There’s a great mix of suspense thriller pacing, blended with the mounting risks the characters take on with each new episode, and compelling backstories to pepper the emotional landscape. The writers leave us wanting more with each new show, while continuing an overall story arc on each character. Even secondary characters become important because of how they add to the plot. I get swept away with being a viewer, but often go back to really listen to each line because these writers do NOTHING without a purpose. It’s fun to see all the threads pull together as the season continues. You have to pay attention if you want to figure stuff out ahead of time, which I really love as a writer.

Other fun things to watch for is the historical research the show’s writers must do into the history of the period. Crane’s dialogue lines are incredible studies into the English language of the time period as compared to how we speak today. Abbie represents our present day while Crane is our past. They’ve even used Middle English in the retelling of the mysterious legend of Roanoke. With Crane remembering the past freshest in his mind, he is a reminder how precious our past is and how much can be forgotten over time.

Crane is also portrayed as a renaissance man with an enlightened perspective against slavery, which works well with Abbie being a black female law enforcement officer whose ancestors crossed paths with Crane’s family. Again, good writing. Characters and their backstories are well thought out and serve a function for all that springs from their conflict or purpose. This show also has many references to literature and books. In the last episode, Crane is quoted as saying, “Without books we have no past and no future.” I hope I remembered that correctly. It stuck with me. So many quotables from the show. 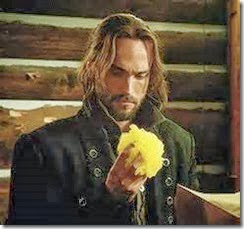 The “man out of time” bits are hilarious and far too few, but that makes every one precious. Crane is outspoken and has trouble admitting when he doesn’t understand our present time, making each misstep of his funny to watch. His first shower, his take on modern technology and conveniences, his disbelief we pay for water or pay 10% levy on baked goods (his introduction to donut holes), his time spent on the “ninernet” and finding a porn chat room,  and his first baseball game are hilarious. Crane’s take on us is entertaining, but it’s what he teaches Abbie about the past and the way he still lives (standing up to evil or injustice no matter the personal cost), endears him to us. This is another test of good writers – to incorporate such special moments into a suspenseful story line at the right time and place, or surprising the viewer when it comes at a very unexpected moment (like the picture above where he sees his first shower sponge and doesn’t ask why Abbie bought it for him). The writers and Mison make me want the whole show to be about Crane assimilating, but of course there must be more for us to get to know characters who are quickly becoming as familiar as family to the growing legion of Sleepyheads who crave the Sleepy Hollow world.

I know the day is coming that Crane will be forced from his period clothing, but I have to say Tom Mison is dream worthy in his revolutionary breeches, boots, and gabardine jacket. He’s wearing a wig for the long sexy hair, but Mison looks amazing in short hair too. Google the many faces of Tom Mison and you’ll see. Here’s fun video on Mison and Beharie. And here’s another of just Mison and his short hair. The fandom on DeviantArt and twitter and countless other chat rooms and forums have quickly evolved. Fortunately people of all ages have embraced this show.

Another writer thing – the plot and character story arcs are really good. The ground swell to Ichabod’s and Abbie’s story is building in such a tantalizing way with cliff hanger and reveals that escalates the momentum. Ichabod and Abbie are the two witnesses in Revelations who are fighting the four horsemen of the Apocalypse, malevolent spirits, a dark coven of witches, and a powerful demon behind it all. The chemistry between Abbie and Crane is growing stronger as they work together and put their lives on the line for the sake of humanity, despite the cost to their lives and loves. I want to bottle similar elements into a book. There are so many things I am learning about good writing. Thanks to Fox, the Sleepy Hollow Writers and Phillip Iscove for bringing a quality show like this to TV.

For other Sleepy Heads, have you seen the online map on the Fox site? HERE is the link. Bone up for the upcoming 2-hour finale (two back to back eps that will be an event held on Jan 20th). Yes, this means we have to wait, but this show is worth waiting for. I can’t even imagine having Ichabod for two hours. (Well, actually I can, but that’s a whole ‘nother post…with a different rating than PG.)


Congratulations to Fox and the cast of Sleepy Hollow for getting picked up for a second season. Fox has a major hit on its hands!!!

For the purposes of discussion:

1.) Are you a Sleepyhead? Will you be watching the 2-hour finale on Jan 20th?

2.) What are your favorite elements of the show – as a writer – as a viewer?

3.) What clothes would you like to see Ichabod wear? I’ve heard rumor of a hoodie, but I truly believe Crane’s clothes are his security blanket. Will he part with them? If not, what will his compromise be?