I am writing the final chapter of my latest project. INDIGO AWAKENING is Book #1 in THE HUNTED series for Harlequin Teen (Fall 2012). I love and hate finishing a book. There is such joy in making the final revision. It’s a real sense of accomplishment that launches me into a euphoric state that lingers. I also tend to procrastinate finishing because I never want to let the world and the characters go. The beauty of this project is that I get to keep the fires burning with a series.

To celebrate, I like to do something special to mark the occasion. As luck would have it, I’ve found the perfect thing. New York Times Bestselling author, Heather Graham, will be in San Antonio on Monday, April 2, at 7PM at the B&N LaCantera to sign her book THE UNSEEN. I made a date with my husband to have a nice dinner too. (Writing a book is taxing for a spouse too.)

THE UNSEEN is set in San Antonio. That alone is enough to give me goose bumps. Heather graciously blurbed my debut book – NO ONE HEARD HER SCREAM – before I had my first book on the shelf. I will never forget her kindness. An author of her caliber, I didn’t know what to expect. As an author, I’m always prepared for rejection, but her generosity blew me away. 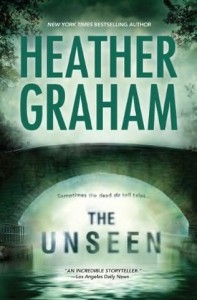 1800s. San Antonio, Texas: In room 207 at the Longhorn Saloon, in the long shadow of the Alamo itself, a woman renowned for her beauty was brutally murdered. Her killer was never found.

One year ago: In that same historic room, another woman vanished without a trace. Her blood was everywhere…but her body was never recovered.

Now: In the last month, San Antonio has become a dumping ground for battered bodies.

All young women, many of them long missing, almost all forgotten. Until now.

Texas Ranger Logan Raintree cannot sit by and let his city’s most vulnerable citizens be slain. So when he is approached to lead a brand-new group of elite paranormal investigators working the case, he has no choice but to accept the challenge. And with it, his powerful ability to commune with the dead.

Among Logan’s new team is Kelsey O’Brien, a U.S. marshal known for her razor-sharp intuition and a toughness that belies her delicate exterior. Kelsey has been waiting all her life to work with someone who can understand her ability to “see” the past unfolding in the present. Now she has her chance.

Together, Kelsey and Logan follow their instincts to the Alamo and to the newly reopened Longhorn, which once tempted heroes with drink, cards and women. If the spirits of those long-dead Texans are really appearing to the victims before their deaths, only Kelsey and Logan have the skills to find out why.

And if something more earthly is menacing the city’s oldest, darkest corners, only they can stop it—before more innocent women join the company of San Antonio’s restless ghosts….

“Graham deftly weaves elements of mystery, the paranormal, and romance into a tight plot that will keep the reader guessing at the true nature of the killer’s evil.”

—Publishers Weekly review on THE UNSEEN

I love stories set in San Antonio, my hometown. My debut book was set in SA and I saw the city with fresh eyes to tell that story. The creepy underpinnings of the paranormal is an added bonus, especially when written by such a gifted author. So my treat to finishing my book is Heather Graham and THE UNSEEN.

What about you, my TKZ family? Do you do anything special to celebrate the accomplishment of finishing a book? What is the wildest thing you ever did or would like to do for your next one? 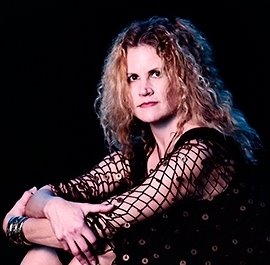 The Kill Zone is delighted to welcome Alexandra Sokoloff to the blog today. As a screenwriter, Alexandra has sold original mystery and thriller scripts and written novel adaptations for numerous Hollywood studios. Her debut ghost story, THE HARROWING, was nominated for both a Bram Stoker award and Anthony award for Best First Novel. Her second supernatural thriller, THE PRICE, was called “some of the most original and freshly unnerving work in the genre” by the New York Times Book Review, and her short story, “The Edge of Seventeen” is currently nominated for a Thriller award for best short story. Her third spooky thriller, THE UNSEEN, is out now, and is based on real-life experiments conducted at the parapsychology lab on the Duke University campus. She is currently working on a fourth supernatural thriller for St. Martin’s Press and a paranormal thriller for Harlequin Nocturne, and is writing a book on SCREENWRITING TRICKS FOR AUTHORS, based on her popular workshop and blog. 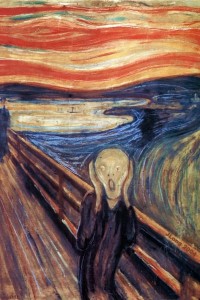 I’m sure every one of us here has ended up on or attended that particular panel by now, also variously called Thrill Me!, You Kill Me, How to Write Suspense, How to Write a Million Dollar Thriller… (and if you’ve got that last one figured out, would you let me know?).

On my Screenwriting Tricks for Authors blog http://thedarksalon.blogspot.com/ I talk a lot about specific techniques for creating suspense. But the bottom line to me is always – different things thrill different people. In people, in bed, in life, and in books. So the core issue, and something I never get tired of talking about with thriller writers and readers, is – what does it for YOU?

Because there are all kinds of literary thrills. Many thrillers are based on action and adrenaline – the experience the author wants to create and that the reader wants to experience is that roller-coaster feeling. I myself am not big on that kind of thrill. I love a good adrenaline rush in a book (in fact I pretty much require them, repeatedly). But pure action scenes mostly bore me senseless, and big guns and machines and explosions and car chases make my eyes glaze over. Nuclear threat? Not my cup of tea. Spies? I’ll pass. Assassins? Uh-uh. Terrorists?… Can I go now?

I’m not even really that fond of serial killers (God, I hate it when things like that come out of my mouth. Or hands. Occupational hazard…) unless we’re talking archetypally mythic serial killers like the ones in pre-HANNIBAL Thomas Harris, and in Mo Hayder’s darker than dark thrillers.
What I’m looking for in a book is the sensual – okay, sexual – thrill of going into the unknown. How it feels to know that there’s something there in the dark with you that’s not necessarily rational, and not necessarily human. It’s a slower, more erotic, and I’d also say more feminine kind of thrill – that you find in THE TURN OF THE SCREW and THE HAUNTING OF HILL HOUSE and THE SHINING. So although I can learn some techniques from spy thrillers or giant actioners, studying that kind of book or movie for what I want to do is probably not going to get me where I want to go.

There’s also the classic mystery thrill of having to figure a puzzle out. Now that’s a thrill I can get behind. There’s a great pleasure in using your mind to unlock a particularly well-crafted puzzle. I love to add that element to my stories, so that even though the characters are dealing with the unknown, there is still a logical way to figure the mystery out.

But conversely, and this is one of my own more peculiar quirks – I also love the feeling of being slowly taken over by complete madness.

One of my very early discoveries as a voracious young reader was Charlotte Perkins Gilman’s terrifying short story, “The Yellow Wallpaper”, one of the greatest feminist horror stories ever written, in which a new young mother is confined to her bedroom by her physician husband and is not allowed to write because it would stress her. Instead she goes horribly and inexorably out of her mind.

Now, why the vicarious experience of going mad should be such a particular pleasure to me, I can’t tell you – clearly something to do with spending my formative years in Berkeley. Or, you know, all those Grateful Dead concerts. Or those San Francisco clubs where we…
Well, all right, never mind that.
But I have come to terms with the fact that madness is an experience I crave, and I’ve made a careful study of how authors I love (Shirley Jackson, Daphne Du Maurier, Stephen King, Edgar Allen Poe, Anne Rice, the Brontes) create that effect.

Another thing I know about myself, vis a vis the supernatural, is that I need to believe that it could really happen that way. So I’m a real sucker for the slow, atmospheric, psychological build, and I research obsessively to see what people who claim to have experienced the supernatural actually experienced, and I look for the patterns in the stories: what are the common elements? What has the ring of truth? 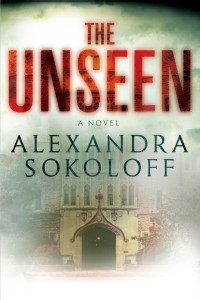 This was especially important to me while I was writing my new thriller, THE UNSEEN http://alexandrasokoloff.com/unseen.html, because it’s a poltergeist story, and unlike with ghosts, there isn’t that much consensus about what a poltergeist really is. It’s a maddeningly elusive phenomenon.

But I love poltergeists! Just the word is thrilling to me. So I created a poltergeist which might be any or all of the things that researchers have postulated that poltergeists are: a psycho-sexual projection, a haunting, some extra-dimensional being, or very human fraud. Creating a story that explored all of those possibilities meant I got to structure in that mystery kind of thrill that I love – only the question was not only “Whodunit?” but also “Whatdunit?”

And that’s always the best for me – that mix of mystery, madness, and the unknown.
So, all you thrilling people – what kinds of thrills do it for you? What are your early influences that will give us an idea of just what twisted kicks you’re looking for in a book?
~~~~~~~~~~~~~~~~~
Coming up on our Kill Zone Guest Sundays, watch for blogs from Sandra Brown, Steve Berry, Robert Liparulo, Thomas B. Sawyer, Paul Kemprecos, Linda Fairstein, and more.