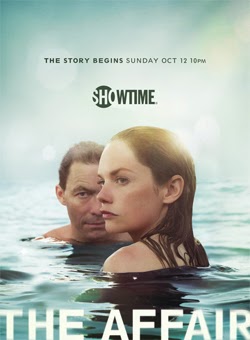 My latest television addiction is the Showtime series The Affair. True, the primary plot of the show, as the title indicates, concerns a relationship between two folks who are married, but not to each other. Each episode is divided into two thirty-minute
he said/she said segments which usually (but not always) show the same events from the markedly different viewpoints of the two participants in a game of Jump the Fence, carried out in the resort town of Montauk on Long Island. Both of the main characters in The Affair are Americans portrayed by British actors Ruth Wilson and Dominic West. Wilson (the unforgettable Alice in Luther) plays the role of the troubled and complex Alison Lockhart, a Montauk “townie” waitress who has married into a family with deep roots in the community. She attracts the not-unwelcomed attention of Noah Solloway, who with his wife Helen and four children are spending the summer in Montauk with Helen’s parents, Bruce and Margaret Butler. Noah is played by West (he looks like a young(er) Gordon Lightfoot), who was Detective Jimmy McNulty in The Wire.  Noah and Alison continue to happen upon each other (it’s a small island), one thing leads to another, and soon the disaffected Noah and the rumpled, damaged, but still-hot Alison are steaming up a local bed-and-breakfast, a vacant house, and various bodies of water. Yep, The Affair is about infidelity, for sure, but the plot elements also include a murder mystery, an island crime caper, and a few other things. What has really attracted my attention to the show (other than Ruth Wilson, of course) is that The Affair is about novel writing and authors.
How’s that? Noah  is a New York City public schoolteacher who, as The Affair opens, has recently published a mildly acclaimed but poorly selling novel, and he has a problem. As the saying goes, one has their whole life to write their first book and six months to write their second. While Noah doesn’t have writer’s block, he is not exactly inspired to write Number Two. What makes things worse is that Bruce, Noah’s father-in-law, is a wildly successful, well-known author whose literary work has earned him enough money to live next door to God. Bruce manages to effortlessly exude a smarmy confidence that he wears like a custom-tailored suit, particularly whenever his much less successful son-in-law is in the room. Bruce does so with facial expressions and pithy comments, among other things, and thus manages to convey the impression that he is three hundred pounds of horse manure jammed into a two hundred pound sack. He can do this while stating the truism that while everyone has one good book in them, they almost never have two, or on another occasion, telling Noah the secret of his excessive success. Bruce’s every move consists of helping Noah with one hand while belittling him with the other. Even when Bruce arranges an introduction and meeting with his agent for Noah, it’s a trap which, it is implied, will be sprung by the failure of Noah’s best efforts. Noah for his part is lacking in confidence and probably for good reason. There is, to note but one instance, a classic scene in one of the episodes where Noah has followed Alison to the town library on the pretext of “accidentally” running into her. He finds his book standing forlorn on a shelf as he lurks between the aisles. The library still uses the ink-stamp method of date-due notification; a quick glance at the inside front of his book tells Noah that no one has bothered to check it out. No words are necessary; the look on Noah’s face speaks volumes.
The Affair is a multi-layered drama, a cautionary tale about a man who gets what he thinks he wants — in a number of ways — only to find that having is not the same as wanting (as Mr. Spock pointed out in the “Amok Time” episode of Star Trek) and that some desires are better left unsatisfied (as Garth Brooks pontificated in the song “Unanswered Prayers”). In the case of The Affair, the dream, or at least one of them, is a published novel. The lesson of the series seems at this point to be that success is not a panacea for all of one’s ills, and that sometimes success is anything but.
Enough of the gloom, however. What book, film, or television series concerning an author would you recommend to the rest of us? And yes, you’re allowed to mention Castle, or Murder, She Wrote.