A fellow writer asked during a recent Sisters in Crime meeting if we felt it necessary to visit every location where our books are set. A debate ensued between the people who said it was absolutely critical to see a place in order to convey an accurate sense of it, and those who thought that having to visit a place in order to describe it might end up limiting the scope of your story.

Here’s an anecdote that came to mind: I attended one of Martin Cruz Smith’s readings a few years back. Someone asked how long he’d lived in Russia prior to writing Gorky Park, since he had done such an amazing job of nailing the feel of the place, from the muddied politics to the bathhouses. His response? A week.

How on earth did he manage to develop a sense of the place in a week? The person asked.

Smith shrugged, and said, “Actually, I barely saw anything when I was there. Most of it I just made up.”

That story always stuck with me, since as a writer the travel question is something I constantly grapple with. I would love to spend half the year jetting around to exotic locations (wouldn’t we all?), but pragmatically speaking there’s no way that will ever happen (and frankly, I would prefer to steer clear of some of the places where my books are set. For God’s sake, CRIME happens there).

Of course, I could make my life easier by setting stories in the Bay Area – I can’t explain why I developed such an unfortunate tendency to set my books on the east coast, or pretty much anywhere that I’m not currently living.

THE TUNNELS took place at my alma mater. I would have loved to have made a trip back while I was writing the book, but financially there was just no way (and my reunions always seem to conflict with Bouchercon).

Same with BONEYARD: I spent a summer living in the Berkshires, but that was nearly two decades ago. I still remember what the place felt like, but in terms of landmarks, much has probably changed.

For THE GATEKEEPER, which jumps from location to location across the southwest, this became particularly problematic. I’ve never been to Houston, yet a considerable portion of the book takes place there.

And the book I just started takes place almost entirely in Mexico City. While I’d love to justify a visit south of the border, it probably won’t happen this year.

So how do I handle this? I improvise. I read guidebooks. I spend hours scouting places with Google maps (special thanks to them for their satellite view option- that feature has been life changing for me). Boneyard revolved around a particular section of the Appalachian Trail, and I read online journals and blog posts by people who had hiked that section. With each book I probably end up doing as much location research as investigating how to build a dirty bomb, or neo-paganism, or whatever else gets incorporated into the story.

Of course, there are times when I wish I was Cara Black, able to write off a month-long Parisian vacation by setting my books there. But I believe that your story finds you. I’ve never once sat back and thought, “I’d really like to set the next book in the Berkshires.” Whatever germ of an idea I have, it always seems to be one that could only take place somewhere specific. And that somewhere has yet to be a place that I live (Freud would probably have a field day with that).

So my question is, do you think that passport has to get stamped in the interest of verisimilitude? Or will Google maps suffice?

I know, I know…it’s a little early for Halloween material, but what the hey, it is my favorite holiday so I’m starting the celebration early. I kicked things off this past weekend when our local Sisters in Crime chapter took the “Official San Francisco Chinatown Ghost Tour.” I’ll describe that experience in more detail next week, suffice it to say it was well worth the money if for no other reason than I learned the true origins of the terms “hooker” and “Shanghaied.”

We opened the evening sitting around the lounge of a deserted Chinese restaurant sharing ghost stories, something I haven’t done since Girl Scout campfire time. So today I’m going to offer my best contribution to the genre. It’s been a long time since I thought of this incident, years, in fact. But it still makes a chill go down my spine…

t decade in the more temperate climes of the Bay Area. Initially it wasn’t a conscious decision, but when forced to reflect back on it I can safely say that for me, New England is just plain spooky. You get a sense of a past there that doesn’t exist in land of split-level ranch-houses and shopping malls. Add to that the fact that I grew up in a two hundred year-old renovated farm house with a ramshackle barn on the property that could easily have passed for the set of a horror film, and you’ll get some insight into my psyche.

In that barn, from the day we moved in until my parents finally left twenty-some odd years later, there was an aged, yellowing calendar on the wall. Since July 1952, no one had torn off a month. We bought the house from an elderly woman who had literally spent her entire life there, and had finally decided to move to a smaller, more manageable house.

Eleanor Cockrell told us that her father, a furniture maker by trade, had died suddenly of a heart attack in that barn mid-July, 1952. Apparently it never occurred to anyone to remove the calendar, or any of the spooky pieces of broken furniture scattered throughout. You would think that as a kid, having a barn like that to play in would have been a treat. Truth is, we barely went in the place. There was just something about it, an undeniable dark energy there.

Not that the rest of the house was any less spooky. I started suffering from insomnia when I was twelve years-old, and was therefore treated to years’ worth of odd late night bumps, creaks, and groans. Footsteps, where there shouldn’t have been any. If I closed the closet door in my bedroom all the way, at some point, maybe a minute later, maybe an hour, it crashed open again with a resounding “thump.”

Strange things happened periodically, lights left on in rooms no one had been in, strange buzzing sounds bouncing around the house in such a way that even my parents were at a loss for an explanation.

But this one event I believe is indisputable. It was right before my parents were due to move out, and I was back home with a boyfriend clearing out years worth of old report cards and movie stubs (yes, I am a pack rat). Most of these treasured items were stored under the eaves in our attic. The Cockrells apparently hadn’t used the attic much in the winter, and Henry had built a large panel that could close off the staircase so only the bottom two floors would have to be heated. For the twenty odd years that we lived in that house, that panel had never been closed, not once. It wasn’t loc

ked, but was almost too heavy to move, so we never worried about it.

It was one of those roasting hot, humid July afternoons that New England specializes in. My boyfriend and I were filthy from crawling around in the accumulated dust and dirt, dripping sweat thanks to the 100+ degree temperatures. As we headed downstairs to take a break, he muttered under his breath that this was the crappiest house he’d ever been in, and he couldn’t wait to leave.

That’s when it happened. Out of nowhere, the panel that hadn’t moved for decades slammed down on his head, sending him tumbling down the stairs and nearly knocking him unconscious. Hard to say if it was Henry taking offense, or another resident—I always suspected we had more than one of them rattling around, it was after all a very large, very old house. My boyfriend survived, but refused to return to the attic. And needless to say, that relationship didn’t work out in the end. Maybe Henry knew best, after all.

I love a good ghost story, so if you’ve got one to share, let’s hear it… 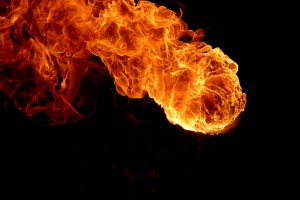 The Kill Zone blog makes its debut on 08/07/08. We’re an exciting group of thriller and mystery authors. Stay tuned!