Below: Harlan Coben hits me up for a blurb. 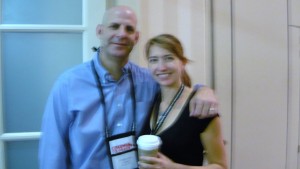 I’ll say one thing, Bouchercon ’08 held the appropriate moniker. People sent to the hospital with food poisoning, people tumbling down flights of stairs, people consuming alcohol in levels roughly equivalent to those experienced at college frat parties (far be it for me to condemn that behavior, however, as anyone who saw me in the bar on Thursday night can attest).

Bouchercon ’08 was truly one for the record books. As has already been noted on various blogs and lists, the Jordans and Judy Bobalik did a phenomenal job of organizing something that makes herding cats look easy. Let’s call it the equivalent of herding parrots. And despite the few inevitable mishaps, it went off largely without a hitch. Here, then, are my belated comments on the experience…

The Panels: Wow, I ended up on some great panels. Those bribes really paid off. Booze and books (or something like that) with Ken Bruen, Jason Starr, Liz Zelvin, Con Lehane, and the inimitable Ali Karim moderating, Gordon’s Gin in hand. Lively and lots of fun. I also loved the one on “Psycho Killers,” here I thought I was an expert but I learned some things (like the true identity of Jack the Ripper. Seriously. Ask Mark Billingham if you’re curious). My only complaint was that my fellow panelists were all far too witty and well-informed. I much prefer to be partnered with dullards, it makes me look so much better in comparison.

The Food: I might be alone in this (although I suspect Robert Gregory Brown would agree with me), but I could not seem to get a decent meal in Baltimore. Part of that might be due to the fact that I ate a fair portion of my meals at the hotel restaurant, Shulas. Never expect a good meal from anyplace bearing any relation to football (I should have learned from all those years I ate at Boomers in NYC.) Lots of salt, copious amounts of butter. I escaped relatively unscathed (although the girl who vomited on Alison Gaylin in Burkes came dangerously close to hitting me as well). But I was definitely a little disappointed in the cuisine: I don’t mind a mediocre entree, but I do mind paying $30 for it. 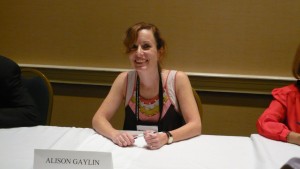 Baltimore: I didn’t see all that much of it, not having a rental car, but wow– the Harbor? Awesome. I quickly learned, however, that there was only one proper route back from the harbor to the hotel. Take the street running parallel to that one, and you were quickly in the midst of seedy bars and places named things like “The Jewel Box.” I might be wrong, but they didn’t appear to be selling jewelry. Though I’m a hard core fan of The Wire, stumbling on set is unnerving. I kept expecting Snoop to turn the corner with her nail gun.

Lee Child: The man throws the best parties. Do whatever you must to get invited, they’re amazing. And Lee is always a class act.

Harlan Coben: Next time you see him, tell him Amherst is a safety school. He loves it, I swear.

My Voice: Started out normal, went through a series of phases from Lauren Bacall to Kathleen Turner on two packs a day to Froggy from the Little Rascals. I’m still recovering.

It was incredible linking faces to all those familiar names from various groups and blogs (such as this one), and I love it when people come up and introduce themselves by saying, “I’m your Facebook friend.” How 21st century is that?

Anyway, I returned home as always with no voice, twenty extra pounds worth of books (no checking the bag on this leg of the journey), a few photos, and a miserable hangover from lack of sleep and general overconsumption of liquor and salt. Whew. Thank god I have a full year until Indianapolis, this time I start training early…

PS- Stay tuned: next week I’ll tell you all about my tour of the FBI Academy in Quantico, including an interesting tidbit I picked up about what tomato sauce resembles under a black light.

Louise Ure, under attack by a rabid fan. Note her calm demeanor, this wo 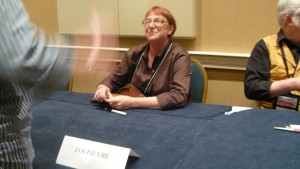 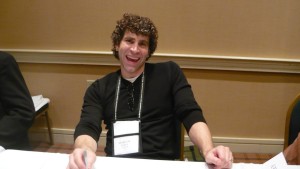