I feel as if I am the only person in the world who is not at Bouchercon this week. I had planned to attend, but a music law seminar in New Orleans which I need to attend to keep my continuing legal education hours current and which has traditionally held in August was inexplicably switched to September, butt-up against Bouchercon. So it is that as you read this I will be in my car, somewhere between Ohio and Louisiana.

I have not flown commercially since 1997. I never liked flying to begin with — when you get down to it, I have control issues — and between the hassles of transporting an unloaded firearm in checked luggage and the thought of a jihadist with a LAWS rocket in hand staring longingly at the silver undercarriage of my plane I made the decision to drive everywhere I need to go. I have never regretted it. I probably will never get to Europe, and getting to the West Coast to serenade Michelle Gagnon with “Happy Birthday” in person will take some planning, but folks who fly everywhere miss a lot. It takes me fourteen hours to drive from my front door to the French Quarter, and that’s with stops for gas, coffee, and draining the crankcase. Westerville to Cincinnati — I can see the house my father where my father was born in from I-71, just after I cross the bridge into Kentucky — to Louisville where I switch over to I-65. The next big crossroads is Nashville, with its amazing intersection of interstate highways right in the middle of the downtown. You best be paying attention to where you are going or you might find yourself heading to Memphis, Chattanooga, or, if you’ve really cocked yourself up, back toward Louisville. I figure that if I can traverse it successfully then Alzheimer’s Disease remains at bay. Less than three hours later I am in Birmingham. With luck and good fortune I stop for lunch with Michael Garrett, with whom I have been friends for a half-century and who was the first editor for a bespeckled, quirky-looking guy named Stephen King. After lunch or otherwise I dog leg down to I-59; south of Tuscaloosa, the state of Alabama slowly melts into Mississippi, which after three hours or so becomes Louisiana. Or so the signs say. Once the swamp starts it is hard to tell the difference. And strange things happen. On a number of occasions, mostly late at night or very early in the morning, a pack of wild black dogs will run onto the freeway south of Picayune, Mississippi and chase my car for a few hundred feet. I almost wrecked the first time it happened; now I toss Milk Bones at them. Eventually, however, the swamps and the dogs gradually give way. I take the entrance ramp to I-10 west and isn’t too long at all before New Orleans rises to the south like a fever dream, as close to a foreign country as you will find within the borders of the United States.

Each trip is much the same, and each trip is a little different. I’ve actually made friends with gas station attendants and waitresses along the way who know the names of my wife and children, even though I see them infrequently (the gas station attendants and waitresses, that is). I would have missed a lot if I had flown, and not just with respect to traveling to and from New Orleans. I’ve gotten speeding tickets in Liberty Hill, South Carolina, been propositioned in a Baton Rouge hotel parking lot at 5:00 AM by a prostitute in a cheerleading outfit, and crammed a Pulp Fiction week’s worth of adventures a few years ago during a road trip to Phoenix with Marcus Wynne driving with a trunk load of machine guns, knives, hand grenades, and other assorted and sundry weapons. For demonstration purposes only, mind you. When the country is passing underneath you at 500 miles an hour, you can miss a lot; on the ground, every mile holds a potential story.

Last week, my publisher sent over the final cover design for my new thriller THE PHOENIX APOSTLES (written with Lynn Sholes) which is scheduled for release in June, 2011. 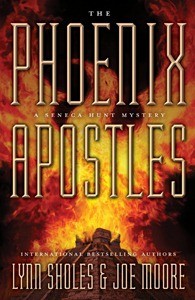 The title—the first one our publisher accepted with no change—refers to a group of followers of a religions cult that believes the only way to save the world from the predicted end of mankind is to appease the gods using the same technique as the Aztecs: human sacrifice. Or more specific, the ripping out of a human heart while the victim is still alive. Those are the “apostles” referred to in the title. The phoenix portion comes from the name of the group itself: The Phoenix Ministry, of which their logo is the mythical phoenix bird rising from its own ashes.

The cover consists of two main elements: the phoenix bird aflame shooting out of an Aztec pyramid, both of which go along with the plot of the story.

Although the back cover text has not been finalized, here’s the gist of the what it will say.

At a dig site in Mexico City, magazine journalist Seneca Hunt is reporting on the opening of Montezuma’s tomb when it’s discovered that the remains of the Aztec emperor are missing. Before she can investigate further, what appears to be a terrorist attack kills the dig team including her fiancé. Seneca barely escapes the carnage not knowing that a passing glimpse of an out-of-place object in the tomb may have sealed her fate. She soon learns that someone is stealing the burial remains of the most infamous mass murderers in history. Seeing a story in the making, her research uncovers a plot to slaughter millions in the name of an ancient cult. Seneca teams up with a bestselling novelist to prove the threat really exists while staying one step ahead of those who want her dead. As time is running out, she must follow a 2000-year-old trail leading back to the death of Jesus Christ.

Some of my fellow thriller authors were kind and generous enough to take the time to read THE PHOENIX APOSTLES and send me a blurb. Here are four:

You can read their complete quotes by clicking here.

So now that you’ve seen the cover and know a little bit about the story, would it grab your attention if you saw it in your favorite bookstore? Would it make you want to read the book? Please be honest and share your opinion. Thanks.