JSB: I am on a research trip and will only have sketchy, if any, internet access today. So I’ve asked Meg Gardiner if she would step in for me. Meg is an Edgar Award winner whose new novel, UNSUB, is getting rave reviews. Like this one:

“Outstanding series launch… Taut pacing and sympathetic characters play against a terrifying villain, who will crawl beneath your skin and trouble your sleep. Thriller fans will eagerly await the sequel.” — Publishers Weekly, starred review

Plus, it’s just been announced that CBS is going to adapt UNSUB as a TV series!

UNSUB releases June 27, but you can pre-order at Amazon, Barnes & Noble, or Indiebound. 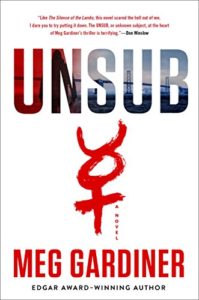 UNSUB is about a legendary killer and the young cop who hunts him. In my thriller, the UNSUB—an unknown subject in a criminal investigation—starts killing again after twenty years, and Caitlin Hendrix must decipher his coded plan before he drags more innocents to the abyss.

The novel was sparked by the unsolved case that has haunted California for decades, and me since childhood: the Zodiac. That infamous UNSUB shot and stabbed seven people in the San Francisco Bay Area. The Zodiac sent dozens of messages to the police and media, including cryptograms that have never been broken. The terror wrought by the killings still lingers today.

And, being a thriller writer, spooky thoughts lead me to spooky ideas. What if a terrifying cold case turned hot again? What if a killer who’d disappeared—as the Zodiac did—resumed killing decades later?

I turned that unnerving idea, that they-never-caught-him fear, into this novel.

In UNSUB, Bay Area sheriff’s detective Caitlin Hendrix is pulled into the chilling world of the serial killer known as the Prophet. This UNSUB posed his victims in garish crime scene displays, and marked their bodies with the ancient sign for Mercury. He’s given Caitlin nightmares since she was a small girl. Her father, Mack, was the lead detective on the original case. The investigation shattered Mack emotionally and tore his family apart.

To write the novel, I had to create the killer’s secret world. I delved into codes, puzzles, astrology, poetry, ancient symbolism—and 21st century hacking. The Prophet is a master of mind games. To stop him, Caitlin must do what her father couldn’t. She must decipher both the Prophet’s old, taunting messages and his strange new rhymes. What do the crime scene tableaus signify? What does the Mercury sign mean? And what is the Prophet’s end game?

Readers ask if I write to exorcise my demons. I don’t. As a writer, I take what frightens me and try to turn it into gripping fiction. I put my demons on the page, and turn them loose for readers to experience in the most exciting and suspenseful ways I can create.

UNSUB is a psychological thrill ride. Enjoy it.

But, if it gets you thinking about what’s out there, don’t turn off the lights. 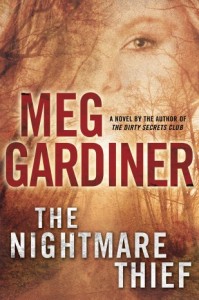 TKZ is thrilled to welcome Edgar Award-winning author Meg Gardiner, whose latest thriller The Nightmare Thief was just released today!
Some writers love first drafts. To them, starting a novel feels like hitting the highway for a summer road trip. They toss the map out the window, crank up the tunes, let their characters take the wheel, and sit back to see where the story goes. To them a first draft means freedom: blue skies, unlimited potential.
I’m not one of those writers.
I love the part before the first draft. Brainstorming is terrific. Brainstorming means flinging ideas at the wall like spaghetti, to see what sticks. And when an idea gets under my skin—stings like a hornet, itches, keeps me up nights—I know I’m on track. I have the fuel that will drive a thriller.
That’s how I felt with The Nightmare Thief. An “urban reality game” goes wrong and traps a group of college
kids in the Sierra Nevada wilderness, fighting for survival along with series heroine Jo Beckett. That idea did it. Yep, brainstorming, and then sketching a synopsis—Jo and the kids are trapped, bad people are closing in on them, and my other series heroine, Evan Delaney, has only hours to find them—that’s fun.
But then I have to actually write the thing. And for me, writing a first draft is like pulling my own teeth with pliers: slow, painful, and messy.
The plot takes form, and it’s fat. The characters sit around a lot, thinking. When they do speak, the dialogue needs spice. Worse, everybody on the page sounds exactly the same and, worst of all, exactly like me. And all those plot twists that were so exciting to sketch (“Evan discovers a deadly betrayal”) stare back at me from the synopsis, going: Well, how?
I cringe. I couldn’t show this stinking mess to my dog, much less my editor, and oh, sweet Lord, I still have three hundred pages to write.
And I need to write them at a rate of 2,000 words a day, because I have a deadline.

That’s when I remind myself:
So I keep going, for months, until I reach the end. Then I run through the house with my fists overhead like Rocky, while the stereo blasts the Foo Fighters’ DOA. “I’m finished, I’m getting you off my chest…” 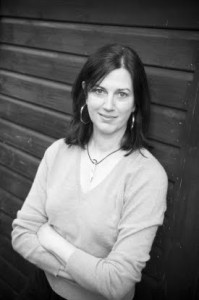 In the five-stage writing cycle (excitement, delusions of grandeur, panic, compulsive eating, delivery) this is known as the False Ending. Because now it’s time to rewrite.
Joy.
I can hear some of you shouting, Rewrite? Don’t make me. Stab me with a fondue fork instead. Repeatedly. Please. B
ut I mean it: Joy. As I recently heard Ken Follett explain, revising means making a book better—and who wouldn’t want the chance to make something better?
And, to be serious, I have a method. Tackle the big issues first.
This is a technique I picked up from Sol Stein’s Stein on Writing, and it has turned my editing inside out. It’s saved me months of wasted work. Stein calls it triage: Fix the life-and-death issues in a manuscript first.
In other words, when rewriting, don’t simply start at page one and go through the manuscript fixing every problem as you spot it. It’s counterproductive to spend a morning fussing over sentence structure if the entire scene needs to be cut.
So I identify all the triage issues and outline a plan to address them. Then I return to my miserable first draft. I attack those fat, introspective scenes. I build in unexpected twists. I obstruct the protagonist’s path. Throw down impediments that are by turns physical and psychological, accidental and deliberate. Breakdowns. A monkeywrench. A landslide—literal or emotional. I cut endless swaths of verbiage, like so much kudzu. It’s gratifying.
Admittedly, revision isn’t all fun. I’ll wake up worrying that I’ve done insufficient research. Maybe some howlers have slipped through. (Anybody seen Lord of War? An Interpol agent strafes Nicolas Cage from a fighter jet. That kind of howler.) So I hit the reference books, and contact some experts, and revise again. And I have a fail-safe plan: write a rip-roaring story, so that if all else fails readers will miss any mistakes. Put the pedal down and nobody can see the errors as they blast through the novel.
Meanwhile the deadline continues to loom. Eventually I reach the stage known as Revise! Or! Die! It comes down to a cage fight between me and my story. With major revisions on The Nightmare Thief, I’m happy to say I won—which is to say, the story won. The lumpen first draft was flick-knifed into a sharp revision. Or sledgehammered, where necessary.
When I finished, I sent it to my editor and pitched face down on my desk. Then I sprang back up like a jack-in-the-box, thinking of all the changes I still wanted to make. Then I pitched forward on my desk again.
Eventually I sat up, picked off all the paperclips that had stuck to my face, and staggered to bed, where visions of Jo Beckett and Evan Delaney danced in my head. Well, they didn’t dance—they opened a couple of beers, clinked bottles, and put their feet up, waiting to see what I would do to them next.
I love this job.
Meg Gardiner was born in Oklahoma and raised in Santa Barbara, California. She graduated from Stanford University and Stanford law school. She practiced law in Los Angeles and taught writing at the University of California, Santa Barbara. She lives with her family near London. The Nightmare Thief is her ninth novel.