Can you identify the moment in your life when you made the decision I am going to be a writer?
What did it feel like? 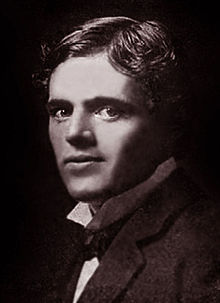 Perhaps the best novel about a writer, Jack London’s semi-autobiographical Martin Eden, captures this singular passion. Early in the novel young Martin is at sea, returning to San Francisco, when the idea takes hold:
And then, in splendor and glory, came the great idea. He would write. He would be one of the eyes through which the world saw, one of the ears through which it heard, one of the hearts through which it felt. He would write–everything–poetry and prose, fiction and description, and plays like Shakespeare. There was career and the way to win to Ruth. The men of literature were the world’s giants . . . Once the idea had germinated, it mastered him, and the return voyage to San Francisco was like a dream. He was drunken with unguessed power and felt that he could do anything . . . To write! The thought was fire in him. He would begin as soon as he got back . . . There were twenty-four hours in each day. He was invincible. He knew how to work, and the citadels would go down before him.
Back on land, Martin sets out with zeal, up to 18 hours a day of it, to realize his writing dream:
He was profoundly happy. Life was pitched high. He was in a fever that never broke. The joy of creation that is supposed to belong to the gods was his. All the life about him–the odors of stale vegetables and soapsuds, the slatternly form of his sister, and the jeering face of Mr. Higginbotham–was a dream. The real world was in his mind, and the stories he wrote were so many pieces of reality out of his mind.
I can pinpoint the day I took the big dive into writing. It was in 1988 and I went with my wife to see a double feature. The movie I really wanted to see was Wall Street. The movie it was playing with I didn’t know that much about, except that it starred Cher.
That movie was Moonstruck, and it knocked me out.
I was a practicing lawyer at the time and had been told writers were born, not made. I had believed that for ten years.
But Moonstruck was so good I knew I had to try to learn to write, even if I failed. I was determined to use the study disciplines I’d picked up in law school to find out how to write fiction. In my journal I wrote: Today I have decided to become a writer.
And I was soon lost in the joy of creating, like Martin Eden. I still remember those early years of writing and discovering as primarily joyous.
So when did you decide to become a writer? Was it a specific moment? A particular influence? And what did it feel like when you started on your quest?
0