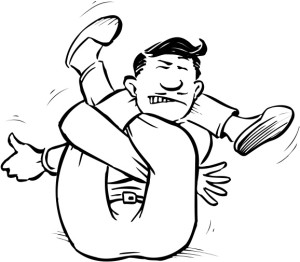 Last week I wrote about the most important rule for thriller writers to follow, namely:
Never allow any of your main characters to act like idiots in order to move or wrap up your plot!
I think I spoke to soon. There is a second rule that is of equal import: the overall premise of the thriller must be justified in a way that is a) surprising, and yet b) makes perfect sense.
This is not easy. Otherwise, everybody would be writing The Sixth Sense every time out. Not even M. Night Shyamalan is writing The Sixth Sense every time out!
So what can we do to up our chances of getting our thriller ending right?
1. Think About Your Contractual Obligation
Thriller readers will accept almost any premise at the start. They are willing to suspend their disbelief unless and until you dash that suspension with preposterousness. In other words, the readers are on your side. They’re pulling for you. You have entered, therefore, into an implied contract with them. They suspend disbelief, and you pay that off with a great ending.
I often hear writers say things like, “Oh, I’ve got a great premise. I don’t know how it’s going to end, but it will have to end sometime. And if I don’t know how it’s going to end, then surely the readers won’t guess!”
That is called, in philosophical discourse, a non-sequitur (meaning, “it does not follow”). I can name one big-name author right now whose last book was excoriated by readers because it had a great set-up, and hundreds of pages of suspense, and then was absolutely ridiculous at the end. I won’t name said author because I believe in the fellowship, and I know how hard this thriller stuff is to pull off.
Nevertheless, I’ve heard said writer say (he/she/it) does not worry about how something’s going to end until (he/she/it) gets there. And said author has paid the price for it.
2. Build the Opponent’s “Ladder”
A thriller or mystery does not begin with the hook, the body, or the Lead character’s introduction. In your story world, it always begins in the past with the Opponent’s scheme. (NOTE: this is not where you begin your book. It’s what you, the author, should know before your book begins).
Erle Stanley Gardner plotted his mysteries with what he called “The Murderer’s Ladder.” It starts with the bottom rung and runs up to the top. There are 10 rungs:
10. Eliminating overlooked clues and loose threads
9. The false suspect
8. The cover up
7. The flight
6. The actual killing
5. The first irretrievable step
4. The opportunity
3. The plan
2. The temptation
1. The motivation
So what you, the writer, need to work out is, first, the motive for the scheme. This is in the heart and mind of the opponent. He is then tempted to action, makes a plan, looks for opportunity, etc. When Perry Mason gets on the case, with the help of detective Paul Drake, they look for clues along the rungs of the ladder, the place where the opponent might have made a mistake.
The point of all this is, when you build your own ladder for the opponent, it will not only help your premise makes sense, it will give you all sorts of ideas for plot twists and red herrings.
3. Write the Opponent’s Closing Argument
This is an exercise I give in my writing workshops. It’s simple yet powerful. At some point in your plotting, whether you are an outliner or a “pantser,” pause and put your opposition character in a courtroom. He is representing himself before a jury, and must now give a closing argument that attempts to justify why he did what he did.
This step rounds out your opponent, gives him added dimensions, perhaps even a touch of sympathy. It also keeps you from the dreaded moustache-twirling villain. No stereotypes, please.
I see a pantser in the back row, raising her hand. “Yes, ma’am?”
“I just can’t write that way! I have to discover as I go along!”
“And you know what you’ll discover? That you have to force an ending onto all that material you’ve come up with. So you’ll go back and try to change, mix and match, but will then discover there are too many plot elements you can’t alter without changing everything else around it, so you’ll end up compromising at the end. Sometimes you’ll make it, but even popular writers who do it this way only bat around .400 on their endings. But if you follow the three steps above, your pantsing writer’s mind will still be able to play, but play with a purpose.”
“But . . .but . . .”
“But me no buts! This isn’t easy, you know. If it was, celebrities wouldn’t hire ghost writers when they try to cash in on the thriller market!”
Make sense? Have you ever found yourself backed into premise implausibility? What did you do about it?