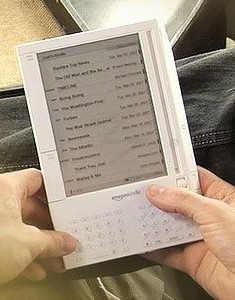 One of the most popular topics on the Kill Zone blog (besides the ongoing strength of the paranormal genre) has been the Amazon Kindle e-book reader. Kathryn wrote about it here and here; John G also had things to say here, and Michelle commented on it here.

After so much talk about the Kindle, I started asking myself if an electronic device could actually take the place of printed books anytime soon. The way I see it, the biggest hurdle that the Kindle and similar devices have to overcome is the technology itself. A book is probably the most ingenious storage device ever invented. Why? Because the basic format has not changed in thousands of years. And hundreds of years from now, someone can pick up a book printed today and read it. There’s no guarantee that the technology supporting the Kindle will last a decade, much less a millennium. What if batteries are suddenly no longer made to power the Kindle? What if the format is no longer efficient to archive the written word? What if a new device comes along that holds a thousand times more data at a fraction of the cost? What if it simply isn’t manufactured anymore and you still have one that needs servicing.

Can that happen? Remember 8-track audio cassette tapes? Betamax? 78 RPM phonograph records? VHS? It’s even getting hard to find a CD anymore now that iPods and MP3 has come along. How about CRT video monitors? Anyone you know still have one now that the cost of LCD flat monitors are approaching the price of a tank of gas? Seen any standard definition, 4×3 aspect ratio TVs in the stores the last time you shopped? If the device that’s needed to play the media is not preserved along with the media, you’re out of luck. There’s no chance of that happening with books because they are their own storage device.

But before we cast judgement on e-book readers like Kindle and say they’re a passing fancy that will quickly go the way of the rotary dial phone, let’s revisit a few pieces of innovation from the past that didn’t catch on at first.

“This ‘telephone’ has too many shortcomings to be seriously considered as a means of communication. The device is inherently of no value to us.”
— Western Union internal memo, 1876

“I think there is a world market for maybe five computers.”
— Thomas Watson, chairman of IBM, 1943

“But what … is it good for?”
— Engineer at the Advanced Computing Systems Division of IBM, 1968, commenting on the microchip

“There is no reason anyone would want a computer in their home.”
— Ken Olson, president, chairman and founder of Digital Equipment Corp., 1977

“The wireless music box has no imaginable commercial value. Who would pay for a message sent to nobody in particular?”
— David Sarnoff’s associates in response to his urgings for investment in the radio in the 1920s

“The concept is interesting and well-formed, but in order to earn better than a ‘C,’ the idea must be feasible.”
— A Yale University management professor in response to Fred Smith’s paper proposing reliable overnight delivery service. (Smith went on to found Federal Express Corp)

“So we went to Atari and said, ‘Hey, we’ve got this amazing thing, even built with some of your parts, and what do you think about funding us? Or we’ll give it to you. We just want to do it. Pay our salary, we’ll come work for you.’ And they said, ‘No.’ So then we went to Hewlett-Packard, and they said, ‘Hey, we don’t need you. You haven’t got through college yet.'”
— Apple Computer Inc. founder Steve Jobs on attempts to get Atari and HP interested in his and Steve Wozniak’s personal computer

“Everything that can be invented has been invented.”
— Charles H. Duell, Commissioner, U.S. Office of Patents, 1899

Can you recall something from your past that you rushed out to buy only to outlive its function and usefulness?