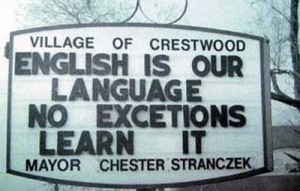 There was a lively debate about typos last week in one of the crime fiction forums. This is always a particularly painful subject for me. You see, I’m a bit of a perfectionist, especially when it comes to my books. I’ve gone through each and every one of them with a fine-tooth comb at least twenty times before they leave my hands and head off to the printer. My sister, a talented editor and copy-editor, has also read through each manuscript three or four times by that point. And of course, my editor and copyediting team at the publishing house have played their part in making sure that the final product is as close to perfect as we can get it.

And yet, somehow, someway, they always get in there.

I first discovered this with my debut THE TUNNELS. My book club offered to read the book, which was a real thrill until they sat down and said almost in unison, “Oh my God, that typo!”

Turns out that a particularly glaring one appears early in the book. I was completely mortified. I raced home after the meeting and dug up my final line-edited copy of the manuscript: no typo. How it got there remains a puzzle to this day.

Which is why I adamantly refuse to crack the cover on my books once they appear in printed form. Because one of those little buggers probably snuck in there. And some sharp-eyed reader is going to make a note of it, and think less of me because of it. Which makes me crazy.

My favorite part of the discussion last week, however, involved other peoples’ “worst typo” ever stories. So I took it upon myself to consolidate the really, truly awful, culled both from that site and other sources:

So I’d love to hear any great (as in, truly terrible/mortifying/hilarious) typo stories.