One of our local independents just announced that in the future, authors will be charged a $75 fee to hold an event at the bookstore.

Immediately, the local bookish listservs lit up. Words like “heinous” and “disgraceful” were thrown around. Boycotts were threatened; conversely, so were Occupy Wall Street-style sit-ins.

I understand that times are tough for booksellers, and that independent bookstores are vanishing faster than the proverbial snowball on a Texas summer day. I also appreciate the fact that by and large, most author events are a losing proposition. Frequently stores stay open late to host the event, which means paying overtime for staff to set up/clean up, ring in purchases, and MC. They also pay extra overhead during those hours (lights, heat, AC, etc), not to mention the costs of publicizing the reading via posters, newspaper listings, mailings, etc.

I get all that. But the thing is, times are tough for authors now, too. Advances have decreased dramatically. Print runs are smaller. Already negligible marketing budgets have now withered to the point of being virtually non-existent. There’s less co-op space available than ever before, and the battle for those critical high-visibility spots is intense.

A few years ago, I visited twenty-seven bookstores over the course of six weeks to promote my book. Had I been forced to pay seventy-five dollars to each vendor, it would have cost me nearly two grand. Mind you, that doesn’t include my own considerable expenses: gas and/or tolls if I drive to the event, flights and hotels if I fly. Most authors not only organize their own tours, they also pay all the associated costs out of pocket, chalking it up to necessary marketing fees. And sometimes, you drive an hour (or, heaven forbid, fly for a few), arrive at the store, and end up pitching your song and dance routine to three people, one of whom is the bookseller.

But we do it anyway. Because it isn’t just about selling books the night of the event (although that certainly never hurts). The main goal is to get to know the bookseller, and develop a relationship that will hopefully lead to them selling copies of your book long after you’ve exited the premises. At least, that’s always the hope.

Moreover, this does seem a bit unjust. There are authors who have the marketing machine squarely in their corner, whose tours are planned for them, who are met at the airport by media escorts who cart them from store to store. Authors who routinely attract between 50-100 people wherever they appear. Authors who, I’m willing to bet, will never have to dive into their own pockets to pay that $75 fee–in all likelihood, their publisher will pay it for them, and they’ll have no idea that the exchange even took place.

So here’s my proposition. Charge those authors more for their events: $125, say, or $150. For a top tier bestseller, the publishers will throw down that amount without blinking. Keep the events free for writers who aren’t regulars on the NY Times list. Give the midlisters a chance to get the word out about their books via your store, and who knows–maybe someday, they’ll be the ones attracting shoppers in droves.

That’s my two cents. But then, I can’t quite see myself camping out in the middle of a shopping mall with a placard.

It would be truly sad to see the grand tradition of book touring fall by the wayside, yet another casualty of the ebook onslaught.

James Scott Bell
On January 31, one of the great independent bookstores in the country, Mystery Bookstore of L.A., will close its doors, yet another victim of the new economic and publishing realities.
It’s almost inconceivable that the greatest noir city in the world is losing such a good friend to the mystery and suspense community.
I had the privilege of launching the first book of my Ty Buchanan series, Try Dying, at Mystery Bookstore. And was further honored to be on their list of authors signing books at the L.A. Times Festival each year (though if you want a lesson in humility, try signing at the same time as Mary Higgins Clark or Robert Crais). 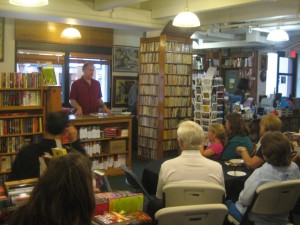 Scores of authors owe a great debt to the longtime managers of the store, Bobby McCue and Linda Brown, and the fine staff who love books and hand-selling to customers. Top names made the store a must for their signings. I caught up with our own Michelle Gagnon there last year, and I’ve seen Deaver and Crais and Connelly and Jeff Parker and John Lescroart and a bunch of others at the store. The pre-Festival party for the Times event was always a highlight, the store stuffed with writers and readers and good cheer.
Virtually every reader of this blog, I’ll wager, knows of a fine local bookstore that’s closed. My son’s favorite bookstore, The Little Old Bookshop in Whittier, announced its closing a couple of weeks ago.
It’s the reality of hard economic times and the huge change in the publishing industry vis-à-vis e-books. There is no changing the facts. Like the era of the passenger train and the 10¢ donut, there may be small remnants and reminders of the past. But the day of the thriving independents is coming to a close.
The Mystery Bookstore will have a presence online, and that is where most used books will be sold now. What we’ll miss is the ability to physically browse, hear from the staff what books they like, and that feeling of community good books can create.
So it’s a melancholy time here in L.A. among writers. I got together with some friends in the local MWA chapter the other day, when the news hit. We were all cut to the heart.
I don’t know what else to say. This is kind of a downer blog post, I guess. But I just had to mention the passing of an old friend.
Maybe tonight raise a glass to independent bookstores and the people who love them.

Last week we lost a real gem of a bookseller and a wonderful man when David Thompson, co-owner of Murder by the Book in Houston passed away suddenly. He was only 38 years old. I was stunned and devastated to hear the news. I still remember the email I received from David soon after my first book, Consequences of Sin, came out in hardcover. I was a complete newbie at the time – I had never been to a mystery convention or a MWA or SinC meeting – and I hadn’t even heard of the bookstore (yes, I really was that dumb!). My publisher, Viking, had set up a local tour of bookstores in Northern California and I was just coming to the end of this when I got an email from David. He said how much the staff at the bookstore loved the book and asked if it was at all possible for me to come out and do a signing. He went on to tell me how much they wanted to try and garner support for me and my books, just as they had for authors like Jacqueline Winspear (whom they, very kindly, compared me to).

I subsequently flew to Houston to do the event and received a much needed ego-boost from them all. David would continue to email me and ask for bookmarks just so they could continue to promote me and my books. When Consequences of Sin came out in paperback he emailed me saying how much they loved the new cover and how much better they believed it would sell now that it looked more like what the book was about(:)). By the time the second book, The Serpent and the Scorpion, came out, Penguin committed to sending me on an expanded book tour that included Murder by the Book – and I think that decision was almost certainly a result of the terrific support I received from independent booksellers like David and McKenna.

It’s hard to explain just how much David, McKenna and the rest of the MBTB staff’s support meant to me at the time. I still believe that for new authors, independent booksellers continue to play a major role, despite the stranglehold of the big bookstore chains and online sellers like Amazon. I will miss having a champion like David in my world but am very thankful that I had the opportunity to get to know him, even if it was just a fleeting chance. My thoughts and prayers are with his wife, family and friends but I think we should also take the opportunity to celebrate the power of the bookseller – the ones like David who love the genre, know just what recommendations to make, and who want their customers to become, like them, avid lifelong fans.

So for all of you who have a great bookseller story, share it now, so we can celebrate the hidden gems that mean so much to us as writers and readers.