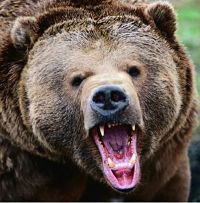 Okay, I’ll admit this reads like the six degrees of Kevin Bacon, but hang with me on this post about writer’s life.
Bears in Alaska are heading into hibernation. The reason I know this is because one of my crazy sisters is hunting brown bear in the Aleutian Islands. She’s been sending photos and funny text messages over her 10-day adventure. She’s not hunting. Her husband pulls the trigger. But being the trooper she is, she dons the appropriate layers against the cold and rain to trudge alongside him, lugging water and food. For added color, she met an interesting man on this hunting expedition—a Romanian billionaire traveling with his body guard. (I’m not the only one in my family who should be writing fiction.) And because she’s my dear sweet sister, she brings books of mine to give away. The photo below is of a woman at the lodge they stayed while they hunted. She is holding my young adult book – In the Arms of Stone Angels (Harlequin Teen, Apr 2011), a cold case murder mystery for teens. 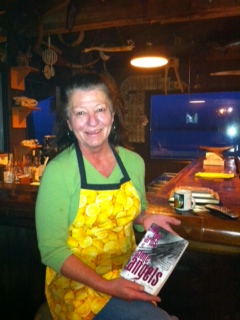 The reason I’m sharing this family story with you is that bears going into hibernation reminded me how I get when I’m in the middle of a project. I’m totally oblivious to EVERYTHING. I’m so vexed on the characters and the world I’m creating that I go without eating or eat weird stuff, forget about sleep, and my capacity for coherent conversation is limited—unless its dialogue.
Simon Wood was a guest on TKZ not long ago. Once he shared a funny story with me about how his wife caught him on the sofa watching TV when he should have been writing. He had eaten a bag of chips and had cats sleeping on his chest. Seeing the look in his wife’s eyes, he headed her off by saying he was deep in thought—that he was actually working. (Yeah, right.) But seriously, this is how it can be for a writer. We never stop working. So I’m fairly certain Simon had his brain “sweating to the oldies” as he gorged on Cheetos and snagged quality cat time.
In truth, Simon might have been indulging in another bad habit of author behavior. Snackage. Authors eat stuff and may not even pay attention to what it is. Like drones or Zombies, we are fixated on what’s in our head. It’s nothing personal, but dirty dishes in the sink, dog hair on wood floors, and a growing mass of dirty laundry become invisible. Personally, I call that a gift, but my husband has a different perspective.
So I’ve turned over a new leaf and after John Gilstrap’s fine example of slimming down and focusing on his health, I am in week 2 of a change in diet. Mostly it’s vegan. I eat raw and cooked veggies and legumes with plenty of fruit. No dairy. For those who know me, this is a HUGE change. Before, I considered meat as dessert. I would rather eat meat than even indulge in something sweet. But I’m outing myself on TKZ to say that I am committed to eating better and taking care of my health.
Anyone have a good vegan recipe?
Seriously, I have been more focused on cooking from scratch with fresh ingredients. My husband and I actually sit at the dinner table to eat instead of plopping down on the sofa with the TV on. We have semi-real conversations over dinner and not just talk about how to kill people and get away with it (a real crowd pleaser). We may even indulge in a glass of wine now and then. I’ll soon add a regular exercise program into this and not just limit my cardio to fast moving fingers over a keyboard.
For those of you smarter than I am, how do you stay healthy with your hectic schedules? What’s your routine? And I would seriously like to hear if you have any good vegan recipes that aren’t loaded with cheese.
Reckoning for the Dead (Adult thriller, Sweet Justice Book #4) – HarperCollins, Sept 2011 Now Available.