I love the challenge of creating anti-heroes/heroines, making a borderline human being into something more. And the closer to the dark side they are, the better I like it, as a reader and an author. The guy could be dark and brooding, but give him a dog (or a baby) and readers will know instantly that he’s worth loving. Or the woman could be an assassin, but give her a younger sister that she’s protecting for a good reason and I’m on her side.

The popularity of the anti-hero (man or woman) continues to be a strong trend in literature and in pop culture. With their moral complexity, they seem more realistic because of their human frailties. They are far from perfect. They tend to question authority and they definitely make their own rules, allowing us all to step into their world and vicariously imagine how empowering that might feel.

Some classic literary anti-heroes that are personal favorites of mine are:

Holden Caulfield in the Catcher in the Rye by J. D. Salinger, Roland Deschain in Stephen King’s Dark Tower series, Lestat in Anne Rice’s Interview with a Vampire, Hannibal Lecter (as Clarice’s white knight) in Thomas Harris’s Silence of the Lambs, Heathcliff in Emily Bronte’s Wuthering Heights, and even Scarlett O’Hara in Margaret Mitchell’s Gone with the Wind.

And here is a short list of noteworthy anti-heroes from the small screen:

On the TV show, HOUSE, Dr. Greg House is addicted to pain meds, a by-product of his damaged leg. He’s also obnoxious, abrasive, brutally honest, and definitely politically incorrect in how he deals with patients, but he’s damned good at what he does—saving lives. His public face appears to be a detached man who ridicules any real human emotion, yet he’s fascinated by true emotion too. It’s as if he’s an outsider looking in, an observer of the whole human experience. We never quite know if he really cares about his patients or is merely obsessed with being right as he puzzles out the reasons for the illnesses.

On the cable show, DEXTER, the strange anti-hero, Dexter Morgan, is a serial killer with a goal. He hunts serial killers and satisfies his blood lust by killing them. He’s got peculiar values and loyalties with a dark sense of humor. And he’s absolutely fascinating to watch.

On the new show HUMAN TARGET, Christopher Chance has a dark history. He’s a do-it-all anti-hero, former assassin turned bodyguard, who is a security expert and a protector for hire. He works with an unusual and diverse team. His business partner, Winston, is a straight and narrow, good guy while his dark friend, Guerrero, is a man who isn’t burdened by ethics or morality. Each of these men has very different feelings about what it takes to get the job done, but they’ve found common ground to work together. And their differences make for a fun character study. (My favorite character is Guerrero and I wish his character had more airtime.)

I’ve put together a list of writing tips that can add depth to your villain or make your anti-hero/heroine more sympathetic, but let me know if you have other tried and true methods. I’d love to hear them.

1.) Cut the reader some slack by clueing them in early. Your Anti-Hero/Heroine has a very good reason for being the way they are.

2.) Make them human. Give them a code to live by and/or loyalties the reader can understand and empathize with.

3.) Make them sympathetic by giving them a pet or a soft spot for a child. Write the darkest character and match them up with something soft and you’ve got a winning combination that a reader may find endearing.

4.) Show the admiration or respect others have for them.

5.) Give your villain and anti-hero similar motivations for doing what they do. Maybe both of them are trying to protect their family, even though they’re on opposing sides.

6.) Give your villain or anti-hero a shot at redemption. What choice would they make?

7.) Understand your villain’s backstory. It’s just as important as your protagonist’s.

8.) Pepper in a backstory that makes your anti-hero vulnerable.

9.) Give them a weakness. Force them to battle with their deepest fears.

10.) Have them see life through personal experiences that we can only imagine but they have lived through. They must be much more vulnerable than they are cynical to deserve the kind of significant other that it takes to open them up to love.

11.) Make them real. To be real, they must have honest emotions.

If you have favorite anti-heroes you’d love to share, I would love to hear from you. And tell us why you like them so much. I’d also like to know if you have any other writer tips to share on creating anti-heroes. Creating them can be a challenge worth taking. Editors sure seem to love them too. 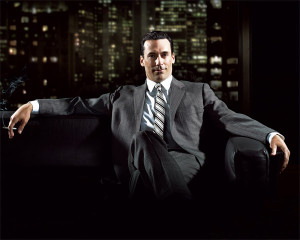 AMC’s award winning series, Mad Men, is back for another season. It kicked off last Sunday to somewhat disappointing ratings.  Which makes it an interesting case study in storytelling. I’d like to explore that a little bit, and make a point about how to portray what I call “negative Leads.”
For those out of the loop, Mad Men  is a recreation of the Madison Avenue advertising world of the early 60s. It’s a fabulous rendition, down to the most minute set details, costumes, dialogue and current events. It really does feel like you’re back in time. The acting is first rate, too. But now comes the hard part.
The series centers around Don Draper, a handsome cipher who happens to be great at his job, advertising. He’s not so great at life. He’s a serial adulterer with a checkered past, given to losing his temper when things don’t go his way. The characters surrounding him are no angels, either. Everyone has “issues” (back in the day when it was not cool to say you had “issues.”)
Which is the challenge of the show. A good friend of mine said he tried to get into it but “I couldn’t stand any of the characters.” So he jumped ship.
And that invites (note: not “begs”) the $64,000 question: how can you tell a story with a Lead character who is not an admirable person? How long can you expect readers, or viewers, to stick with a negative Lead?
I am sure the show’s creators have taken on this challenge purposely. They did not want to create a “same old” show. In a way, they’ve given us the first truly postmodern series on TV: a meandering plot line about enigmatic characters who seem to have no purpose in life save the making of money in their work.
This is new because for millennia story has been about heroes battling on behalf of the community, upholding its sacred values and traditions (read Joseph Campbell for more on that.)
But Mad Men doesn’t give us this kind of Lead. Instead, we are asked to empathize with Don Draper as he goes about (for four seasons now) acting in ways that are self-destructive, immoral and confused. For many viewers, like my friend, that isn’t enough to hold them.
Here’s my theory on that. An audience will track with a negative Lead if they see a chance for his redemption. Or, in the alternative, to see if he will get his comeuppance.
Think about that. Why do we read about Scrooge, a bitter misanthrope who hates, of all things, Christmas? We follow his account to see if he’ll be redeemed.
Likewise Scarlett O’Hara. What a little twit. But when the Civil War breaks out and she has to save Tara, we wonder, Hey, maybe she’ll grow up after all. (She does, but too late, and that’s a tragedy.)
What these Leads show us early on is the possibility and capacity for change. That’s what gives us hope as we read about them. Scarlett shows grit and Scrooge shows empathy. We begin to think they have a shot at getting things right.
In Mad Men, it’s unclear if there is any “right.” And that may be what frustrates a large bloc of viewers. Personally, I keep watching because I want to see if Mad Men ultimately has what the Greeks called telos – a purpose, a completeness – toward which it is working. But I have to say I’m watching more in the capacity of the interested observer than the passionate lover. I admire the show even as it keeps me at something of a distance.
Another example is House. Unlikable Lead very good at what he does. But as another close friend recently told me, “I stopped watching because I got tired of waiting. It wallows too much in its negativity.”
So there’s the challenge. Most readers and viewers hope for redemption, but if you make them wait too long you risk losing them.
What about you? Do you prefer to read books or watch shows about traditional heroes? (Note that a good hero has flaws, but is still aiming toward something we can vaguely label “the good.”) Or do shows like Mad Men and House do enough to hold your interest?