I had the pleasure of working with Elyse Dinh-McCrillis (The Edit Ninja) on my short story anthology – Sex, Death and Moist Towelettes – and hope to send her more full-length novels. She came recommended from another thriller author – Brett Battles – so I owe him a beer. She is guest posting her thoughts on the patterns of authors. Enjoy! 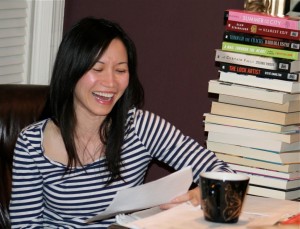 This is Elyse laughing at my anthology…I’m sure.

Patterns in Writing
When Jordan approached me about a guest post, I decided to write about the patterns I’ve noticed in my clients’—and other authors’—work. These aren’t errors, but habitual things writers do that make their writing predictable. Most of my clients are surprised when I point them out, so it’s become clear these things happen unconsciously.

I’m not talking about a signature. One of Elmore Leonard’s signatures, for example, is his hip dialogue, with specific rhythms you can almost hear while reading. But the dialogue isn’t repetitive. I’d like to discuss things that show up repeatedly, and could potentially distract readers.

Here are some of the most common patterns I’ve seen, in everything from manuscripts by first-time authors, to finished novels by Pulitzer-nominated writers.

I was a beta reader for a friend and noticed he described many things in his novel as “dank”—basement, room, weather, smell, even mood. I suggested he substitute a few synonyms. He did a search and said, “I found only thirteen mentions in the whole ms. That’s not a lot!” I asked, “But how close were they together?” He admitted that in one instance, the word showed up twice in three pages. Astute readers would notice that.

A recent thriller by a New York Times bestselling author had an overabundance of “murmured” as a dialogue tag. After a while, I thought, “Is everyone in a seance?”
We all have words we overuse. One of mine is “just,” e.g., “I just saw that recently, and thought it was just a mole.” Be aware of your favorite words, do a search for them after you’re done writing, and replace if necessary.
Using the same descriptions and mannerisms for different characters.

In this one book I read, whenever the women were nervous, they bit their lower lips, and when the men experienced stress, they ran their hands through their hair. I started counting the number of times this happened, and could see it coming if characters started feeling stressed or anxious. I got so caught up in the counting, I lost track of what was going on in the plot.

related pattern would be using the same descriptions as shortcuts for different types of characters. I edited an ms in which every good guy had chiseled features, every tough guy had a crew cut, and every bad guy had horrible teeth. Wouldn’t it be more interesting if a good guy had a facial scar, a tough guy wore glasses, and a bad guy looked like George Clooney? Not falling back on easy clichés to denote stereotypes increases the chances of fully dimensional characters being born.
Repeating the same sentence structure.

Many writers fall into a rhythm as they write, which sometimes results in the same kind of sentence over and over: always starting or ending with a participial phrase, starting or ending a line of dialogue with a direct address, too much passive voice, multiple run-ons in the same paragraph, three short sentences in a row. (“He looks. He listens. He waits.”) All those stylistic choices are fine, but when one occurs too often, the writing becomes routine. Mix up the kinds and lengths of sentences, use them in different order, keep readers on their toes.

Sometimes writers get tied to one kind of speech pattern. I recently read a book by a well-known author in which many characters would eliminate the first words in questions: “That him?” “Help you?” “Hell you talking about?” It’s fine if one character talks like that, but I think a little old lady might say, “Is that him?”

Being attached to a favorite letter, name, number, or color.

In a novel I edited, there were characters named Linda, Lita, Lynn, Lila, Laura, Leslie, Lori (they were not related). I have a good guess as to what letter might be on the author’s monogrammed towels. In another ms, several of the names rhymed: Boris, Norris, Morris, Doris, Dolores. The thriller read like poetry.

Make a character list to see if too many names contain the same letters, or if some of your minor characters are named the same. I worked on a book in which a couple of “under fives” (a movie term for characters with under five lines) were named John, because they were less important to the author and he failed to see he’d used the same name for both.
I read a thriller by an author whose favorite color was seemingly red, because two in three characters were redheads, and different characters drove red cars, had on red dresses, and owned houses with red doors. Another time, an author was stuck on the number 9. There was a countdown to a momentous event, and every chapter had a time designation that ended in 9—3:19, 2:29, 6:39, 12:49, etc. These patterns weren’t part of a theme, merely coincidences that became distracting. Sometimes people wear beige, and things happen at 5:42.
Overuse of italics for emphasis.

This one book I read averaged one italicized sentence for every two paragraphs. So many things were important. The italics soon became mundane, which defeated their purpose.

There are other patterns I can discuss, but I may have already overstayed my welcome. Thank you to Jordan for asking me to be here, and all of you for indulging me.
What patterns have you noticed in your reading…or your writing?

Elyse’s Website: TheEditNinja.com
Twitter: @EditNinja (official), @popculturenerd (where Elyse is more active)
By John Gilstrap
I have an overarching theory on life that I believe I might have mentioned here on TKZ before: Failure cannot be inflicted upon anyone; it must be declared by the individual.  No matter how hard an artist is knocked down, or how often, as long as he gets to his feet and stays true to his obligations as a professional and a craftsman, the game is still on.
To quit, however, is to guarantee failure. I respect those who grow too tired of the fight and walk away, just as I respect anybody’s well-reasoned choice to do anything.  To chase the choice to quit with a lot of whining, though, is unseemly.  No one forces another person to give up writing or to seek publication, and since the decision was not inflicted, it makes no sense for an artist to blame anyone who’s not staring back at him from the mirror every morning.
There’s a corrollary: Success must be earned.
It’s worth noting, I think, that with very few exceptions, every person who has found success in any endeavor in any industry shares the single attribute of having worked hard.  They brushed away rejection and tried again.  And again.  When success didn’t come as quickly as they wanted, the real achievers took a look at their own skill sets and identified what needed adjusting in order to improve their marketability. Actors learned to sing, singers learned to act.  Literary writers learned how to write more commercial stuff.  English Lit majors went back to school to learn about cyber security—or to get the PhD that would allow them to teach what they love at the collegiate level.
They didn’t sit around and blame others.  Yes, the publishing industry is changing, so adapt. No one owes success to anyone else.
Throughout the struggle, it’s important to keep your head in a positive space—a space that can be elusive, given the state of popular media.  Entertainment Weekly published a snarky article last week entitled “Stars’ Worst Movies.”  In it, they made fun of an early George Clooney movie called Red Surf.    Rather than being embarrassed about an admittedly less-than-great film, though, Clooney said in the article, “I’ve done some bad jobs along the way.  But you’ve got to do them.  The Facts of Lifes and the Baby Talks and the Red Surfs.  When you’re starting out, those are big breaks.”  He didn’t apologize for those early efforts because he was doing his best to make a living doing what he loved to do.  When the movie flopped, he went on to the next one.  I hear he makes decent coin as an actor these days.
What’s the analogy to novel writing?  Recognize your own big breaks as they happen.  Judge your path to success not just based on the long road that lies ahead, but on the accomplishments you’ve achieved.  Start with the fact that you’ve finished a book.  Or three.  That puts you in the stratosphere among those who dream of publication one day.  Got a short story pubbed in your local supermarket rag?  Shout it from the rooftops.  It’s a big deal.
Opportunity never knocks.  Opportunity lurks  out there, waiting to be discovered through hard work, dedication and risk taking.  It makes itself most visible to those who are focused on possibilities, and are open to trying new things.  Some of my greatest successes in this industry and in others can be traced to casual conversations that were struck up in the most unlikely of places.  Some might call these chance encounters, but I don’t buy that.  Sure, there’s an element of serendipity, but that would not have mattered if both parties hadn’t had their heads and their hearts in the right places.
Whenever anyone asks, “How do I get an agent?” or “How do I get a producer interested in the film project I want to do?” my answer is always the same: Go out and find them.  Introduce yourself.  Attend the meetings they attend, and introduce yourself.  Talk to them.
Earn their attention.  If that takes you out of your comfort zone, then either expand the zone or abandon the dream.  Or invent a brand new approach that no one’s ever heard of.
But please.  No whining.