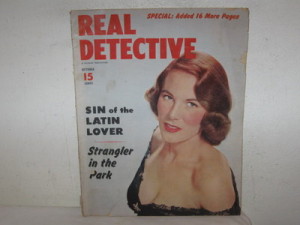 I received a nice present in the mail this week from one of my best and oldest buds,  he being former radio personality extraordinaire, editor, movie critic and all around good guy Jeff Gelb. Jeff was and is a huge fan of popular culture, including detective fiction. He was at a Pulp Fiction Festival (the genre, not the film) in Los Angeles recently, visited the dealer room, and popped for a couple of old magazines from my past: Real Detective and For Men Only. Don’t tell anybody, but I got a little misty-eyed when I opened up that plain brown envelope and found those treasures.

Those magazines were a part of my childhood. I grew up in an era when gentlemen got haircuts every two to three weeks whether they needed it or not. The barber shops didn’t have all of the frou-frou crap that they have now. Amenities consisted of a barber pole in front, leather chairs to sit in while you waited for a barber, a gumball machine, and magazines. None of the barbers — not stylists, but barbers — would have been mistaken for Ru-Paul, either. Each and all would be squared away, wearing pressed black pants and white collarless button-up shirts, like they were interns or something, with their tools of the trade on a sink behind them. Hair tonics like Vitalis, Brylcreem and Wildroot were lined up with military precision, with different styles and lengths of scissors laying at the ready next to them. The big deal at the barbershop, however, was the reading material. There were comic books, sure, but there were also stacks and stacks of different magazines, such as the Field & Stream and Popular Mechanics.  And then there were the marginal publications that weren’t quite of the level of Playboy but were “gateway” literature, if you will. One or more of the barbers might frown if you were in short pants and busily thumbing through such lurid articles as “Babes, Brawls and Border Smashing” — many was the time I missed hearing my name called, so absorbed was I in the reading material — but the general rule was that if you were old enough to get your hair cut without mommy waiting with you then it was none of their business. The drugstore and supermarket didn’t consider their magazine sections to be the library, but at the barbershop you could read

Stag and  Saga and the aforementioned For Men Only. The covers were always adventure-themed, with generic, very capable-looking Marlboro men rescuing women in danger of losing their lives or their underwear, in no particular order. The so-called “true detective” magazines ran a close second, with exciting article titles gracing lurid covers. A publication that met readers of both types of magazines was an irresistible piece of trashy wonder titled The National Police Gazette. The latter was an extremely popular periodical, though no one would admit it. When I was an altar boy (yes, I was) my school was selling magazine subscriptions as a fundraiser.  I asked a geriatric priest I knew if he would be interested in purchasing any subscriptions. He asked, with a smile on his face and a twinkle in his eye, “Ya got Police Gazette?” I responded “I wish!” which brought a coughing fit on him so severe that I thought we were going to have to call the emergency squad.

Those magazines are long gone. Stag and the like reached a point where they had to, uh, up (or maybe down) their game to compete with such upstarts as Penthouse and such and just couldn’t meet the production quality (yeah, I know, I know).  The true detective magazines collapsed under their own weight; there were just too many of them. Still, I miss those magazines, and I didn’t have any of them (the “why” is a tale for another time), which is why my friend’s generous gift meant so much.  One of the many sad things about their absence is that they provided a good place for fledgling authors to hone their chops and make some money along the way. Lawrence Block, Stephen King, and Harlan Ellison all paid for electricity and food and diapers with stories in such magazines. The issue of For Men Only which I received contains an excerpt from a new (at the time) book by Alistair MacLean titled THE WOMEN TAKERS, which, we are helpfully informed, is a $5.95 bestseller (that is what a hardback book would set you back in 1968). The same issue contains some lurid but well-written short fiction written by Donald Horig, who would go on to become a well-respected and prominent baseball writer. Horig is still alive, probably cringing at the mention of the story, entitled “The Taming of Mona.” If he’s embarrassed,he should not be.  There are still a few avenues for writers to display their wares — the science fiction and mystery digests come immediately to mind — but  there aren’t many. They’ve gone the way of the traditional barber shop. I miss both.
I ask this question primarily of older readers, but you younger folks can absolutely join in the fun as well: what magazines do you miss, ones that you read during your childhood and teen years but are no longer published? It can be anything from Pageant  to  Humpty Dumpty to Photoplay to, yeah,  The National Police Gazette, but what do you miss? And why?