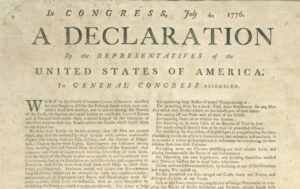 Happy Independence Day to you all! Today I shall be grilling a couple of bone-in ribeyes while sipping a cool 805, a California blonde ale (I mean, what Los Angeles noir writer can resist a blonde ale?)

Notice: In the above paragraph I did not merely write steak and beer.

Specificity of detail is the subject of today’s post. It is a bit of a riff off Brother Gilstrap’s recent disquisition on research, and Garry’s post wherein Ian Fleming extolled specific details that “comfort and reassure the reader on his journey into fantastic adventure.” I want to focus on the little details that crop up all the time as we write. How much time should we take tracking them down? Are they really all that necessary?

If you care about creating the deepest reader experience you can, then I say yes.

I saw the guy run across the street and get in his car.

is not as good as

I saw the guy run across the street and get in his Corvette.

The latter pulls us deeper into the fictive dream. The former merely moves us along.

And yet, one can get too fancy:

I saw the guy run across the street and get in his 2021 Sebring Orange Corvette Stingray, with its 6.2L V8 DI engine and 8-speed dual clutch transmission.

I started thinking about this recently when I read a review of the thriller Coyote Fork by James Wilson, especially this paragraph:

The novel’s dynamics and the broad outlines of the plot are not especially unusual for the thriller genre. Where Wilson does go off-piste is with the resolution. Refreshingly there are no fisticuffs or explosions, no implausible escapes from submerged cars or cellars slowly filling with nerve toxins, and none of those slightly over-detailed descriptions of firearms – you know the sort of thing, “he recognized the gun immediately, it was a WarCorp Deathsprayer PB600, one of only fifteen ever made, with a fine silver finish and a customized barrel mounted by a laser sight….”

Interesting thought, that, especially for those of us writing thrillers with weaponry involved. But it applies to all detail work in this way: We want to be authentic without over-larding the prose. We don’t want Papa Bear or Mama Bear writing—we want it to be just right.

How do we achieve that level?

A simple guideline: If you’re only going to mention something once, and it has no other significance to the story, choose one specific detail, and that’s it. Thus:

Already the writing is more vivid.

If the item mentioned is going to reappear or have some importance, you can consider adding to the description. Let’s take our Corvette example:

The guy ran to his Corvette. I’d have to be on my toes—by way of the gas pedal—to keep up with him. Those babies have a V8 engine and eight speeds. At least the hot orange color would make it easy to follow.

Notice I did not use “Sebring Orange” here. That’s because it’s a specialty paint unique to Corvettes, and most people wouldn’t know that. Which brings up the second consideration:

Terry recently wrote about this very thing. You’ve got to consider the knowledge, education and background of the viewpoint character.

For example, a dance instructor who has a gun pulled on her probably wouldn’t think this way:

I backed up against the wall. The guy reached under his coat and came out with a Glock-17 9 mm Luger pistol.

On the other hand, a character like Brother G’s Jonathan Grave has specialized knowledge. The trick is to slip it in naturally, as in this clip from Hostage Zero:

Venice clicked the remote control in her hand, and the image on the screen changed to a much younger version of the plain vanilla face, but this time accompanied by a complete set of fingerprints. “This is his Army induction photo from twenty years ago,” she explained. “His service record is unremarkable. In and out in six years with an honorable discharge as an E–5.”

Jonathan recognized E–5 as the Army’s rate of sergeant. To achieve a third chevron in six years was admirable, but nothing special.

Of course, never allow author intrusion into the narrative.

Sam didn’t know a thing about knives, but was glad to have this one on hand. It was a Buck 110, made in the good old U.S.A. Released in 1963, it set the standard for lock-back folding knives. And with its Paul Bos heat treatment it had an edge retention second to none.

If you need specificity in a detail, but it’s something the character wouldn’t know a lot about, use a subjective impression instead.

Sam pressed the silver button. The blade unlocked. Easy now. Pull the thing open all the way. Yeah, he could work with this. Like that ape in 2001 who found out a bone can be a weapon.

Otherwise, I find out what I need as fast as I can, then get back to work.

One way to do this is with Google images. I once needed the word for the glass outcropping over the entrance of a hotel. I assumed it was just a glass awning, but wanted to be sure. So I Googled hotel glass awning and clicked on Images and there they were, whole bunches of them. Only they are called canopies.

Boom, done, back to work.

This means that sometimes his lead character is going the wrong direction on road in Georgia. But then, how many readers are going to know that? And of those who do know, how many of them will be so bothered they won’t buy another book by said author?

My own bottom line is this: I’m willing to spend a little extra time to get every detail right. I’m sure I sometimes miss, but it’s not for lack of trying.

How about you? Are you a “detail person”? Do you need to get the little things right? 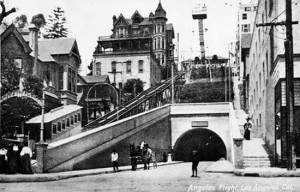 We all know the importance of details in fiction. Whether it’s the description of a place or person, the details should always do “double duty.” They ought to go beyond the mere painting of a picture and contribute to the mood you’re trying to create.

When you set up your story world, this is especially important, for the following reasons:

Details make or break verisimilitude. Lisa Scottoline sets her books in her native Philadelphia for just that reason. “You can really help support a character if you understand the setting,” she said in a Time interview. “So for that reason I generally write about Philadelphia. My experience is that people extrapolate it. If you write specifically enough, they extrapolate it to their hometown, wherever that is, even if it’s Amsterdam. By the same token, if you don’t write specifically enough and you have generic Anywhere U.S.A., then nobody feels anything. The whole bottom drops out of the story.”

You are wasting an opportunity if you do not find motifs in your settings. A motif is a distinctive visual that repeats. Like the green light in The Great Gatsby. It carries symbolic weight and deepens the reading experience.

For L.A. writers such as myself, the city provides a wealth of these icons. One of my favorites is Angels Flight. Allow me to riff on it just a bit.

Angels Flight is a funicular railroad (two cars going up and down in balance) that was built in 1901. It was to bring the folks living in the fashionable burb of Bunker Hill down a steep grade to the shopping area of Los Angeles. That saved them a long walk down and up steps, or getting the horse and buggy all rigged. For a penny, you could ride the cars.

Bunker Hill began to fade as the years went on. Post WWII, especially, it became a place of run down tenements and flophouses for cons and criminals to gather. But Angels Flight remained right there on 3rd Street, doing its thing.

It was going to be torn down in the late 50s, a victim of redevelopment. But a grass roots movement sprang up to save the old girl. My dad, an L.A. lawyer, was part of this. He even brought his young son downtown to ride on it in front of news cameras and the L.A. Times.

So, in a small way, I helped save Angels Flight. The city preserved it, moved it half a block south, and reopened it. An unfortunate accident took it offline for several years, but earlier this year it started running again.

I have used Angels Flight in a novel of the same name. This novel was mentioned in a great pictorial history of Angels Flight by Jim Dawson. Several film noirs have featured it over the years.

If you’re ever in downtown L.A., take a ride. You catch it on Hill Street, between 3rd and 4th, directly across from the Grand Central Market. Up at the top you can get a great view of the city of angels.

Talk about your settings. Do you have a favorite? Do you visit your locations and purposely work in the details?

Here’s a short trip on Angels Flight for your viewing pleasure.