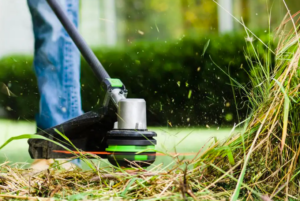 I love talking to fellow writers who are craft nuts. I love getting into the weeds to discuss things like adverbs, POV violations, and whether you should use a comma in the phrase “Oh God.” (On that last one, strict rules of style say yes. I say it depends on how the character is reacting—somberly or fearfully?)

Today I want to discuss four weed words (and I’m not talking about euphemisms for a certain plant). This is about as granular as you can get, but where else but on a famous writing blog can all this be hashed out? Try discussing dialogue attributions with your insurance agent, or exclamation points with your CPA!

I sipped my flat Coke and gave her the head start she’d asked for. Then I picked up my change and left a buck on the bar. I went out the door, up the stairs to the street. (Lawrence Block, A Ticket to the Boneyard)

The word Then is used here for rhythm. The action isn’t “hot.” The author is controlling pace. I do this myself. When the action is hot, I don’t use Then. I cut sentences to the bone. But if things are a bit slower it comes in handy.

There’s another use of the word then I like. It’s when you want to emphasize an emotional moment.

She came to me then and put her arms around me.

Strictly speaking, you don’t need then. But then again…ahem…it has a subtle and enhancing effect.

This word gets a lot of chatter down here in the weeds. Some say you never need it, as the action itself should prove the suddenness. One of Elmore Leonard’s “rules” (discussed here this past week) is: Never use the words “suddenly” or “all hell broke loose.”

First off, this “rule” can confuse newbies, who might think you should never use suddenly at all, not even in dialogue. Obviously false.

But Leonard was talking about narrative. We have to remember that he wrote his books in 3d Person. In 3d, the word Suddenly is coming from the author. It’s a “tell.” There are better ways to convey such moments (see commenter Marilynn Byerly’s examples in Brother Gilstrap’s post).

But in First Person, Suddenly is perfectly acceptable. In my latest thriller, Romeo’s Rage, I have a scene with Mike and Sophie at an eatery where a minor protest is happening. Mike is confronted by the gadflies and their upraised camera phones. He starts confounding one of them with verbal jiu-jitsu.

Suddenly, Sophie was by my side and looking at the cameras.

That’s how Mike experiences the moment. It’s like an internal thought. And since this is First Person, we can go there. Without the Suddenly, readers might think Sophie was standing next to Mike all the while, instead of showing this new side of her—a willingness to jump into a fray.

Here’s another example of an internal thought, from another Mike. Hammer, to be exact, in Mickey Spillane’s Kiss Me, Deadly. In chapter one Hammer has picked up a mysterious woman wandering on the road. He is going to take her into New York to drop her off, but another car speeds in front of them and stops, causing a crash. Mike jumps out of his car, and so do men from the other. Gun shots. Mike takes a sap to the head. Down he goes. As he fights to come to [italics in original, and notice our friend Then making an appearance]—

It was like a sleep that you awaken from because you had been sleeping cramped up. It was a forced awakening that hurts and you hear yourself groan as you try to straighten out. Then suddenly there’s an immediate sharpness to the awakening as you realize that it hadn’t been a bad dream after all, but something alive and terrifying instead.

Now, just for the heck of it, let me say something about all hell broke loose. I think most of us would agree it’s a cliché and that it’s better to show what the breaking hell looks like.

But in First Person you can use a cliché if you freshen it up, as in All hell broke loose and kicked every dog in the neighborhood.

That’s fun to do.

This one I usually avoid. It’s flabby and indistinct. An exception is when it’s used sardonically in First Person POV, as in: Needless to say, when he saw the toilets, Sarge got very upset.

And, of course, a character might use it in dialogue.

But in narrative portions, don’t write: He was very big. Instead, write something like: He was the size of a beer truck.

This one is constantly overused by writers when the narrative goes into the past. Consider:

She had grown up in Boston. When it came time to apply to college, she’d chosen Wellesley and Bryn Mawr. and Yale. That didn’t please her father, who had made his sentiments known to her in no uncertain terms. They’d had a lot of arguments over that.

Here’s a rule for you (that’s right, I said rule): Use one had to get you into the past, but after that you don’t need it.

She had grown up in Boston. When it came time to apply to college, she chose Wellesley and Bryn Mawr. That didn’t please her father, who made his sentiments known to her in no uncertain terms. They argued a lot over that.

Nothing lost, and the narrative is crisper.

I now put down my Weed Wacker and invite comments. What other weed words or phrases do you see popping up in our wonderful craft garden?

33 thoughts on “Down in the Writing Weeds”