The 20th Century gave us an explosion of legendary entertainers. So many on that list. A sampling in song would have to include Judy Garland, Ella Fitzgerald, Frank Sinatra. Music: Gershwin, Ellington, Glenn Miller. Comedy: Chaplin, Keaton, Laurel & Hardy. Dance: Astaire, Kelly, Bill “Bojangles” Robinson. You can fill in your own favorites. 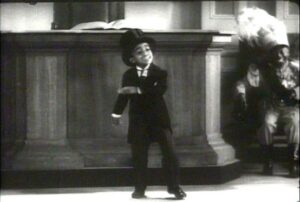 But there’s one name that deserves to be mentioned here, for he was a quadruple threat: he could sing, dance, and act equally well in comedy or drama. His star flew across stage, screen, TV, and Vegas.

His name was Sammy Davis, Jr. (the image capture is Sammy, age 6).

I recall seeing two of his movies as a kid. In Sergeants 3, a 1962 remake of Gunga Din set in the Old West, Davis plays Jonah (the Gunga Din role). He’s the company bugler. At the crucial moment the wounded Jonah crawls up to a cliff to sound an alarm on his bugle, saving the day. I don’t remember any other scene in the movie except that one.

The other movie is Robin and the 7 Hoods, a 1964 musical set in Prohibition-era Chicago. It has Sinatra, Dean Martin, and Bing Crosby. But it’s Davis who steals the show, especially with the song “Bang! Bang!” (again, the one scene I remember).

Davis began as a child-prodigy dancer, and moved easily into singing. His career took off in the 1950s. He made memorable appearances on TV shows—variety, drama, comedy—all the more notable because of two things: the entrenched racism of the time, and the near-fatal car accident that took one of his eyes.

He also battled inner demons, drugs, and alcohol—yet whenever he performed, he gave his all. Audiences knew that.

Which brings me to today’s subject. Are you a quadruple-threat writer?

I love plot and its mate, structure. We all know there are two preferred methods to go about this. “Discovery writers” find their plot while wearing loose pants. “Plotters” develop it before the journey.

But find it you must, which means driving along Death Road.

The stakes of the plot must be death—physical, professional, or psychological. The road must have certain signposts, the markers of structure. You must know when and how to drive through the Doorway of No Return, stop for a look in the Mirror, and how to race to a surprising and satisfying ending where the reader will thank you and ask when your next book comes out.

Yes, some writers disdain the idea of plotting. I recall an article by a “literary writer” who admitted she was one of these. But then she learned the value of plot, and fell in love with it. Her book sales went up as a result.

Like Sammy Davis, Jr.—learning the basic steps in tap before he could start to set loose with his own style—you can learn the basic elements of plot. I humbly refer you to my book on the subject.

Do you have a Lead worth following? Is your Opposition stronger than the Lead, with a compelling reason to oppose? Are both these characters fresh in surprising ways?

Are the other members of you cast orchestrated—sufficiently different so they may be in potential conflict with everyone else?

Are even your minor characters delightfully distinct to add spice to the plot?

Characterization can be equated with the unique steps a dancer adds in tap. The fresher, the better.

Is your fiction talk crisp? Do the characters use it as a compression and extension of action? Do they have different cadences so they don’t sound the same? Are you skilled at planting exposition and subtext within dialogue?

I’ve long held that dialogue is the fastest way to improve any manuscript. In you first-drafting, it’s where you can really play and improvise, like a great actor might in a scene. Then you can craft it into the kind of fiction talk that gets the attention of readers, agents, and editors.

Are your scenes structured to include a clear objective, obstacles, and an outcome that is a setback (or a success that leads to a setback)? Do you get into most scenes in medias res (the middle of things) and end them so the reader is prompted to read on? Do you plant mysteries and secrets? Is there tension throughout, even when friends are involved?

This is Sammy in his last performance, in the joyous movie Tap. At this time he had the throat cancer that would kill him just a year later. Yet here he is, going toe-to-toe with the late, great Gregory Hines. The setup: a group of aging tap dancers live together in a combo rooming house and dance studio run by Mo (Davis). Max (Hines), just out of prison, comes for a visit. He and Mo get into some banter over dance style, when Max shades him with, “You ain’t got no legs.” Mo takes that as a “challenge.” A challenge is when all the tappers get together and try to outdo one another. Mo calls the oldsters in for the challenge. The subtext is that Mo is sick, and is not supposed to dance anymore. This is enforced by Mo’s daughter, Amy (Suzanne Douglas), who conveniently is not around. Every one of these tap dancers, in their 70s and 80s, are legends of the form, from Howard “Sandman” Sims to Harold Nicholas (not to mention another prodigy, young Savion Glover, watching). They proceed to strut their stuff, and oh, what stuff it is!

And then, at the end, Sammy Davis, Jr., the quadruple-threat entertainer, gives his all one last time:

Get proficient in plot, characterization, dialogue, and scenes. Then you, too, will become a master tapper…of the keyboard! You’ll be a quadruple-threat writer.

28 thoughts on “The Quadruple-Threat Writer”