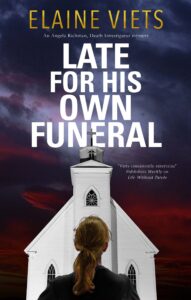 I can’t wait to tell you about my new mystery. “Late for His Own Funeral,” my latest Angela Richman, Death Investigator.
The idea came from a Los Angeles Times story that’s stuck in my mind for almost twenty-five years. Back in 1998, an LA coroner’s official told a woman that her husband was dead. I’ve changed the couple’s names to Harriet and Michael Brown.
The news of her husband’s death dropped poor Harriet into a nightmare. Michael Brown was Princeton-educated and a high-ranking political advisor. Yet the coroner said he’d died in police custody from an abscess caused by dirty needles. Harriet demanded to see her husband’s body. The official said no – the body was being autopsied. The wife refused to believe that Michael was shooting heroin. The police confirmed the dead man’s fingerprints as her husband’s. The dead man was also carrying Michael’s driver’s license.
Harriet said her husband’s driver’s license had been reported lost. The coroner’s investigator fed her a hunk of baloney. He “suggested that she was feeling anger and denial,” and that was normal.
Besides, the Browns had been going through a tough time, and Harriet knew her husband was depressed. Michael had moved out of the family home, and was staying with a relative. Michael had walked out of the relative’s home, crying, and the family hadn’t seen him for a few days. Harriet caved and planned Michael’s funeral.
The morning of the funeral, Michael was walking to his sister’s house when she drove by. Her car swerved to a stop and she screamed, “You’re supposed to be dead.”
The funeral was canceled. The real dead man was a drug addict who’d been carrying Michael’s missing driver’s license.
Turns out the police used Michael’s missing driver’s license as a basis to identify the dead man. There were many other snafus, but the first rule of body identification is: never, ever identify a body by a driver’s license.
That story sparked my new death investigator mystery, “Late for His Own Funeral.”
Here’s the story: Sterling Chaney is a rich and respected resident of Chouteau Forest, Missouri, home of the one percent. When his flashy sports car crashes at high speed, there isn’t enough of the driver left “to spread on a cracker,” in the inelegant words of the medical examiner.
Angela is at the funeral with the new widow, Camilla. The casket Sterling wanted causes quite a shock. Angela said: 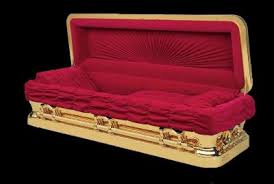 Camilla, his widow, had given her husband what’s called the “Golden Send-Off” – she’d buried him like a rock star in a stunning Promethan casket. Sterling’s remains rested on plush velvet. The casket’s exterior was actually solid bronze, hand-polished to a mirror finish. It shone like gold.
Michael Jackson, James Brown, and Aretha Franklin all went to their reward in a Promethan casket. And now, Sterling Chaney. His casket, covered in roses like a Derby winner, looked incredibly gaudy in the austere Episcopalian church in Chouteau Forest, the largest town in Chouteau County.
I could hear the shocked murmurs and appalled whispers as the funeral home attendants rolled the garish casket up the aisle. The churchgoers would be even more shocked if they knew it cost thirty thousand dollars. In the pew behind us, a sturdy black-clad matron gasped, “Good heavens!” 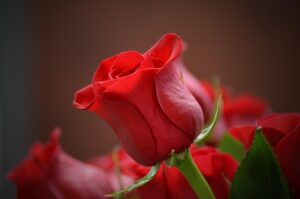 But the service would soon have a bigger shock.
The funeral was interrupted by an unexpected guest – Sterling Chaney. Yep, he’s back, alive and well and drunk as a skunk, trying to take selfies with his coffin in the church.
Angela works for the county medical examiner’s office. She’s in charge of the body at the scene of murders, suicides, and unexplained deaths. Sloppy work by the medical examiner and the police created this mix-up. Angela is relieved the mess wasn’t her case.
After his dramatic entrance, Sterling Chaney, the man who was late for his own funeral, is all over the news. Sterling loves the spotlight, until a smart reporter reveals he earned his fortune by exploiting women who worked for him in a shady business. Sterling is disgraced and shunned by Chouteau society.
Then there’s another fatal crash.
This time, Death Investigator Angela Richman has to confirm that Sterling is really dead, then find out who killed him and why. Did the man who was late for his own funeral die twice?

Writers, do you use news stories for inspiration? 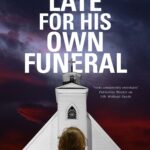 “Late for His Own Funeral” will be published by Severn House July 5. Pre-order your copy now from your favorite bookstore. The hardcover and ebook are available from Amazon: https://tinyurl.com/4xvthy2e
and Barnes and Noble: https://tinyurl.com/5f2ytdt6
Check the ebook price. It may be cheaper at one retailer.

36 thoughts on “Late For His Own Funeral”