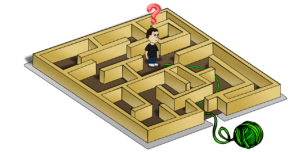 It may be the most famous (infamous?) case of writer’s block in the annals of American lit: George R. R. Martin is having trouble completing his epic fantasy series A Song of Ice and Fire (of which A Game of Thrones is the first volume). It’s been over ten years since the last book, A Dance with Dragons, came out, and there is no pub date in sight for the next one, titled The Winds of Winter.

So what’s the trouble? Martin himself admits:

Looking back, I wish I’d stayed ahead of the books. My biggest issue was when they began that series, I had four books already in print, and the fifth one came out just as the series was starting in 2011. I had a five-book head start, and these are gigantic books, as you know. I never thought they would catch up with me, but they did. They caught up with me and passed me.

Another clue to the blockage comes from something he told his friend Diana Gabaldon, “I’m having all kinds of trouble. Have you ever killed somebody off that you later realized that you needed?…I just painted myself into a corner.”

Now, Martin is a famous “pantser” who writes and writes and tosses and writes some more. But with the enormous cast of characters and plot lines in this series, it’s surely impossible to keep track of everything just by way of the gray cells.

Enter the series bible. This is a master document that keeps track of all the essential information you write, from book to book. It’s both a time saver and a mistake avoider.

When I began my Mike Romeo thriller series, I knew it was going to be more than three and less than 100 books. (Ha!) So I started a series bible that I add to when each new book is completed. I use Word for this, utilizing three layers of TOC headings. For example, I have epigraphs in each book. So part of my TOC looks like this:

There’s only one thing I need to know: Whose side are you on? – Paul Simon, “Paranoid Blues”

Sing, goddess, the wrath of Achilles. – Homer, The Iliad

The most important sections of my series bible are:

Under each title I have a squib of the basic plot line, which is usually all or a portion of the book description copy I use on Amazon.

Each recurring character has an entry so I can recall how they were described the first time they showed up. Nothing worse than having blond hair in Book 1 and auburn in Book 5.

I also have a summary of their backstory. Sometimes I drop in more backstory in a later book. I’ll paste that material into the master backstory for that character. This way I don’t repeat the info (unless it’s in short summary form for readers who are getting into the series other than by way of the first book) or write something that contradicts previous material.

Romeo is always reading a book, or recommending one to his young friend Carter “C Dog” Weeks. This list keeps me from referring to the same book in different novels.

Romeo is steeped in philosophy, and usually makes several references in a novel. To keep track, I list them in this section. That way he is not expounding on Plato’s Cave in more than one book.

Romeo also likes to drop some Latin, which usually confuses bad guys. My go-to reference is Amo, Amas, Amat and More. I keep a running list so Romeo does not repeat himself (except for the tattoo on his forearm: Vincit Omnia Veritas. Characters ask what it means, others ask if his name is Vincent, etc.)

Romeo used to be a cage fighter and thus makes use of a wide variety of moves and blows. I choreograph the fight scenes using books and YouTube videos. I don’t want the same moves over and over. This section is a refresher on what I’ve done before.

I have sections with possible titles, possible plots (mainly What ifs), possible wisecracks, and bits of wisdom to impart. These things occur to me at various times and places. As soon as possible I record them here so as not to forget them.

That’s basically it. One thing I’ve been asked is if I keep a running list of every single character I put in a book. I used to do that on a spreadsheet, but not anymore. So how do I avoid using the same name when creating a new character?

First, I come up with a list of potential names using the Scrivener Name Generator (which is seemingly infinite in its offerings). I’ll choose one and run the first and last names through a Spotlight search on my Mac. Thus, if I’m thinking of naming a character Mandi I do a search…and up comes Romeo’s Town. Ah yes, now I remember! Then I can pick another name and run that one through Spotlight.

My series bible has saved me a lot of time and searching around in previous books. My way is just one method. Scrivener guru Gwen Hernandez has an article on how she uses the program for her bible. See also Sue’s post here. There are lots of ways you can do it…so long as you do it.

If you are a series writer, do you have a bible? What goes in it? How do you use it? Additional tips are welcome.

34 thoughts on “Creating a Series Bible”