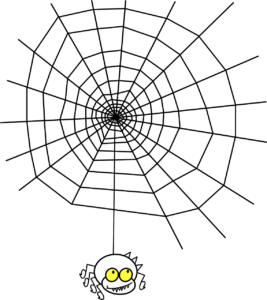 I usually spend a bit of the early morning outside. Mrs. B has created a lovely garden spot in our back yard. There’s a Celtic cross under an arched trellis, with creeping vines all over, and I’ll sip some coffee and have a little quiet time. Good for the brain and the soul.

The other morning, quite by chance, I saw something wondrous—a beam of sunlight illuminated a silvery, gossamer thread about eight feet in length. It was a single strand of spider web extending from our overhang to about twelve inches above our outdoor table. From there a more intricate web spread outward, like a pyramid, with three strands mooring it to the surface. A miracle of art and architecture!

I had Cindy come outside to see it. We gave it a full minute of admiration before I reluctantly took it down. As I did I said, “I’m sorry, Mr. Spider. I really am.”

I gave the anonymous arachnid no further thought.

The next morning I came out as usual. And once again the sunlight revealed that overnight the same spider had constructed the exact same web!

This time I had not the heart to take it down, for I know that spider must be a writer.

Spider webs are made of silk, a natural protein fiber. The material comes from an underside structure on the spider’s abdomen called a spinneret. In this way, a spider can seriously maintain it is creating art from the gut.

And isn’t that what writers do?

We toil and spin. We reach deep inside. We weave a dream onto the page. (This metaphor is also pursued in Larry Block’s excellent Spider, Spin Me a Web.)

And when we release our work it is sometimes summarily taken down—rejected by publisher or agent, ripped by critic or reader reviews. All that work!

So what do we do?

We go back to the keyboard and spin again.

We’ve talked recently about persistence and why we write. But maybe there’s one thing we ought to learn from the spider: We write simply because that is what we do.

To me that’s the difference between a writer and a hobbyist. Nothing wrong with the latter, mind you. A hobbyist can make some nice lettuce through productivity and business sense.

But a writer is someone who can’t contemplate not writing. William Goyen expressed it this way:

“I can’t imagine not writing. Writing simply is a way of life for me. The older I get, the more a way of life it is. At the beginning, it was totally a way of life excluding everything else. Now it’s gathered to it marriage and children and other responsibilities. But still, it is simply a way of life before all other ways, a way to observe the world and to move through life, among human beings, and to record it all above all and to shape it, to give it sense, and to express something of myself in it. Writing is something I cannot imagine living without, nor scarcely would want to. Not to live daily as a writing person is inconceivable to me.” (The Writer’s Chapbook, George Plimpton, ed.)

Now, I don’t mean that there aren’t times when we need a break. Rest is as much a part of the writing life as typing. That’s why I normally write six days a week and take Sundays off to rest. I always find I’m raring to go on Monday. I’ve taken two or three weeks off near the end of a year to think through my goals for the next twelve months.

I also understand completely when even highly successful writers may want a longer break from the hamster wheel. I do suspect, however, that at some point there will be a tug in the gut, that yearning to spin another web.

Because that’s what we do.

George Bernau was a San Diego lawyer who nearly died in a car accident. In the hospital he took stock of his life and “decided that I would continue to write as long as I lived, even if I never sold one thing, because that was what I wanted out of my life.” He had discovered he was a spider writer and went on to write some popular thrillers.

Do you ever contemplate giving up writing for good? Think you actually could do it without your Spidey sense luring you back?

Do you take breaks from writing? How do you feel when you’re away from the keyboard for any length of time?