Wired For Story by Lisa Cron was one of the first writing craft books I read. It was published in 2012, just as I was drafting my debut novel. Wired For Story, A Writer’s Guide to Using Brain Science to Hook Readers from the Very First Sentence was game changing. It caused me to go back and rewrite—a good thing because my book did well on opening day.

I was so inspired by Wired For Story that I contacted Lisa Cron and thanked her. She graciously responded, and that led to Lisa sharing a guest post on my blog at DyingWords. I’ve dug it from the archives and am happy to repurpose it here at The Kill Zone. Hopefully, Wired For Story can have the same effect on others as it did on me. 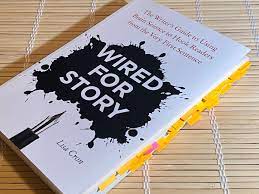 What would you say if I told you that what the brain craves, hunts for, and responds to in every story it hears has nothing to do with what most writers are taught to strive for? What’s more, that it’s the same thing whether you’re writing literary fiction or a down and dirty thriller?

It’s a seductive belief, because all those things are indisputably good. But they’re not what hook the reader. The brain, it turns out, is far less picky when it comes pretty prose than we’ve been led to believe.

What does the brain crave?

Beginning with the very first sentence, the brain craves a sense of urgency that instantly makes us want to know what happens next. It’s a visceral feeling that seduces us into leaving the real world behind and surrendering to the world of the story.

Which brings us to the real question: Why? What are we really looking for in every story we read? What is that sense of urgency all about?

Thanks to recent advances in neuroscience, these are questions that we can now begin to answer with the kind clarity that sheds light on the genuine purpose of story and elevates writers to the most powerful people on earth. Because story, as it turns out, has a much deeper and more meaningful purpose than simply to entertain and delight.

Story is how we make sense of the world. Let me explain . . .

It’s long been known that the brain has one goal: survival. It evaluates everything we encounter based on a very simple question: Is this going to help me or hurt me? Not just physically, but emotionally as well.

The brain’s goal is to then predict what might happen, so we can figure out what the hell to do about it before it does. That’s where story comes in.

By letting us vicariously experience difficult situations and problems we haven’t actually lived through, story bestows upon us, risk free, a treasure trove of useful intel – just in case.

And so back in the Stone Age, even though those shiny red berries looked delicious, we remembered the story of the Neanderthal next door who gobbled ‘em down and promptly keeled over, and made do with a couple of stale old beetles instead.

Story was so crucial to our survival that the brain evolved specifically to respond to it, especially once we realized that banding together in social groups makes surviving a whole lot easier.

Suddenly it wasn’t just about figuring out the physical world, it was about something far trickier: navigating the social realm.

In short, we’re wired to turn to story to teach us the way of the world and give us insight into what makes people tick, the better to discern whether the cute guy in the next cubicle really is single like he says, and to plan the perfect comeuppance if he’s not.

The sense of urgency we feel when a good story grabs us is nature’s way of making sure we pay attention to it. It turns out that intoxicating sensation is not arbitrary, ephemeral or “magic,” even though it sure feels like magic. It’s physical. It’s a rush of the neural pleasure transmitter, dopamine. And it has a very specific purpose.

Want to know what triggers it?

When we actively pursue new information – that is, when we want to know what happens next — curiosity rewards us with a flood of dopamine to keep us reading long after midnight because tomorrow we just might need the insight it will give us.

This is a game changer for writers.

It proves that no matter how lyrical your language, or how memorable your characters, unless those characters are actively engaged in solving a problem – making us wonder how they’ll get out of that one – we have no vested interest in them.

We can’t choose whether or not to respond to story. Dopamine makes us respond. Which is probably why so many readers who swear they only read highbrow fiction are surreptitiously downloading Fifty Shades of Grey. I’m just saying.

I know that many writers will want to resist this notion. After all, the brain is also wired to resist change and to crave certainty.

And for a long time writers were certain that learning to “write well” was the way to hook the reader.

So embracing a new approach to writing – even though it’s based on our biology, and how the brain processes information — probably feels scary. The incentive to focus on story first and “writing” second, however, is enormous. To wit:

Indeed, the pen is far mightier than the sword.

That is, if you know how to wield it. 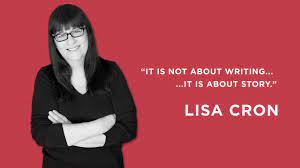 Lisa Cron is an instructor at the UCLA Extension Writers’ Program. She has worked in publishing at W. W. Norton, as an agent at the Angela Rinaldi Agency, as a producer on shows for Showtime and Court TV, and as a story consultant for Warner Brothers and Village Roadshow. She lives in Santa Monica, California.

Kill Zoners – What’s your view on brain science and storytelling? Is it something you consider when writing?

36 thoughts on “Our Brains Are Wired For Story”