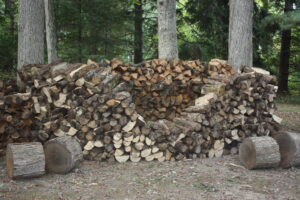 I love wood—growing trees, harvesting lumber, cutting firewood, making things out of wood. There’s no official name for a lover of wood, but someone proposed “lignophile” (ligno – Latin for wood + phile – Greek for love). That would be me.

I grew up in rural Ohio in a house on a wooded lot. As a boy, I roamed the woods, built a treehouse, mowed the trails, and repaired the fences. I didn’t realize how much my early years had affected me until I finished college and got married.

Being the typical newlywed with very little income, a family to provide for, and free furniture sitting on every curb for anyone to take, I began hauling old furniture home to my garage and repairing it. The style of our house was “early marriage.”

After a few years of doing this, I became interested in building my own furniture and began collecting tools. When I returned to my home community after medical school and residency, I began heating our house with firewood, cut, split, hauled, and stacked from the family woods.

Fast forward forty years, and I purchased the family property (house and 28-acre woods) from my parents. My wife and I now live in my enchanted forest, where I continue to be terminally afflicted with lignophilia.

We heat our house in the winter with firewood harvested during September and October. It is hard work, my wife continues to remind me, and we are getting older. But I enjoy keeping the house a toasty 74 degrees while the wind is blowing and the temperature outside dips below freezing. A heating bill of zero is a nice bonus.

I am always looking for easier ways to handle the firewood. We burn 8-9 cords a winter. That’s a lot of wood. And this year, because of above-average rain with soft soil and several windstorms, we’ve had five large trees blow down in our yard and on the forest trails, extra wood to cut, split, and stack.

I’ve cut up those trees into firewood, but I’m running out of places to stack it. And that introduces the topic of this post, experimentation and trying new ideas. I hate the extra time it takes to build an end to a wood stack (a crisscrossed, log-cabin-style, wood column). I’m eventually going to burn it, and then I have to build another one. What a waste of time. So, this year, I stacked the extra wood between trees. But I’m running out of trees in the wood-storage area.

And that’s when I tried a colossal, stupid experiment. I didn’t want to build any ends to brace the stack, so I thought, “Why not build the stack in a big circle? No ends, right?” So, I tried it.

Being a fan of experimentation, I was too stubborn to start over. “Let’s see what we can learn from “our mistake.” (I had now pulled my wife into my insane plot.) I began gradually moving subsequent layers in toward the center of the circle as I stacked higher to compensate for the leaning. Now my stack was starting to look like an igloo.

No, we couldn’t junk the idea and start over. We needed to finish what we started, learn any more lessons that could be gleaned from “our experiment.” So, we labored on.

The pile survived at 4-5 feet high without falling. We’ll see if it withstands the winter winds. The Roman arch is supposed to be a strong design element, right?

I was just beginning to close the circle, when my wife said, “How are you going to get inside the circle to put the tarp on and off the wood?”

Oh, yeah, I hadn’t thought of that. I should have put in two posts (creating an entry into the circle) that the pile could lean against on either side. But I might as well have dug a post hole at either end of a long straight pile, and I was too lazy for that. That was the whole purpose, to save time, right? And then another idea hit me. I could put in an open box structure—open on both ends to walk through, no digging required—so the wood could be stacked against both sides, supporting itself, and I would have a doorway into my magic garden.

My wife groaned. We left a “dip” in our pile at about two feet high so I could climb over it. I might yet build that box, maybe, unless I get another idea.

Bottom line, my genius circle of success, turned out to be a giant dome-shaped debacle. But…I had not given up. I stuck with my junker, wacky idea all the way to the bloody end, “learning” from my mistakes. Or as the politicians say when they’ve created a disaster, “We must investigate this, so we can prevent this failure in the future.” Right.

So, now to you, TKZ community. How far down the road that’s not working do you drive your clunker of an idea before you abandon it and scurry off to the new manuscript lot? Do you hang in there, try to repair the clunker, and see what you might learn from a “failed experiment?” Or, do you quickly trade in the old beast for a shiny new one?

Tell us about one of your “failed” experiments. Catharsis is good for the soul.