Now, I’m not knocking formal education from a reputable and prestigious institute of higher learning. No. Not at all. Nothing compares to personal exposure from profs and peers. But the end result, knowing linguistic principles and how to find/use English writing resources to polish your prose, is what an English language degree is all about.

Let me tell you where I’m coming from.

I’m a cheap SOB. I rarely pay full pop for anything, including books. The other week, I was snooping in a thrift shop and checking their used book section. There it was. This behemoth titled The New Lexicon Webster’s Encyclopedic Dictionary of the English Language. 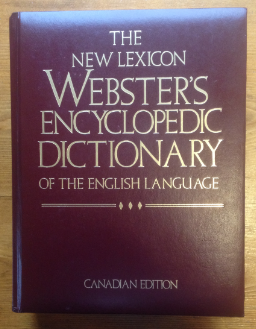 It was on an upper shelf and darn near took out my rotator cuff lifting it down. Whoa! This thing is like new! It was hard covered, bound in faux leather with faux gold-gilded page ends, and—I swear to God—had nearly two thousand of them chocked-full of every detail on the English language you can imagine.

I set it on a display counter and browsed. The copyright page said 1988, but that didn’t worry me none about being outa date. We’re talkin’ English here. Surely the words and structures haven’t changed much in thirty-three years except for some new-fangled lingo like “smartphone”, “pumpkin spice”, and “Covid19”. Let’s look at the good stuff—timeless stuff—like gerunds, compound predicates, interjections, inverted orders, irregular comparison of adjectives, prepositional phrases, and that elusive eunuch called a dangling modifier.

There’s something about a book of quality. You know. The paper book that’s perfectly typeset—bound so you can lay its front cover-spine-back cover on a surface and each page, as you turn, lies perfectly flat without having to weight one side and the other with a cordless drill and a ceramic garden gnome.

This is exquisite. The table of contents aroused me. Preface. Staff. History of the English Language. Languages of the World. Guide and Use of the Dictionary. Editorial Abbreviations. Pronunciation Key. English Handbook. An 1144 page dictionary?  If I knew everything in here, it’d be like having a masters degree in the English language.

With both hands that should’ve been in white gloves, I carried this treasure to the till. “I don’t see any price marked,” I said to the till-lady who looked like a hard-core, 50’s librarian crossed with an inked biker-chick, reluctantly volunteering at the hospital auxiliary store or maybe completing a plea-bargained, community work service program.

Anxiously, I awaited her answer.

Over cat-eye glasses, she read a corrugated poster board suspended from the ceiling by thick butcher twine. It stated their general price assignments. “Let’s see… looks like all our books are fifty cents apiece.” She cat-eyed at me. “No dickering, though.”

My vitals reacted. “You… you… you only want fifty cents for this?”

“Says fifty cents for all books.” She looked at something below the cat eyes. “Looks like you found yourself a bargain.”

Start The Car!  I did. I got the equivalent of a Masters Degree in English Language for a half-buck. Call it two quarters or a fifty-cent piece. Far, far less than a Starbucks pumpkin spice latte or the ridiculous rate for the parking ticket pinned to my windshield.

I took her home, this big book of English language. I call her “her” because I think English gets the Germanic short schtick from romance languages like French which is my wife, Rita’s, first language and I try to be romantic with Rita because being romantic with Rita usually pays off even though I don’t speak more than five words of proper French nor does Rita want me to.

I poured two fingers of Scotch and sat down to enjoy her. Her title somewhat perplexed me—The New Lexicon Webster’s Encyclopedic Dictionary of the English Language. Now, everybody’s heard of Noah Webster, and everyone’s got his dictionary. Encyclopedia? Duh. Remember back in grade school when you were either on Team Britannica or Team World Book?

Hmmm… I see what they’re doing here. They’re blending an all-encompassing dictionary in with an encyclopedia strictly dedicated to English language structure. Right on! But, what’s a Lexicon?

I was tempted to Google it. However, the answer was right in the preface. “Lexicon can be a book containing an alphabetical arrangement of the words in a language and their definitions; the vocabulary of a language, an individual speaker or group of speakers, or a subject; or the total stock of morphemes in a language.”

Morphemes? I had to Google that one, and I suppose that anyone with a Masters Degree in English Language would know that “a morpheme is the smallest meaningful lexical item in a language. A morpheme is not necessarily the same as a word. The main difference between a morpheme and a word is that a morpheme sometimes does not stand alone, but a word, by definition, always stands alone.”

I didn’t know that. I found out there were a lot of things I didn’t know about the English language as I paged through her, The New Lexicon Webster’s Encyclopedic Dictionary of the English Language. There was a short history lesson that clearly documented our language’s evolution from Old English through Middle English and on to Early Modern English. I especially got a kick out of the spelling and sound of the West Saxon version of the Lord’s Prayer from Matthew 6 of the Bible’s King James Version. It’s impossible to reproduce on my modern keyboard so I’ve attached a photo/screen shot.

Try pronouncing this gibberish after a few triple whiskeys. Reminds me of a guy named Rod Tubbs who was in our police poker club. Tubbs spoke like this halfway and worse through every evening.

Enough sidetrack. English study is a serious business and, if I wanted to get my money’s worth, I needed to keep paging. I’ll save you from regurgitating the 1144 page dictionary, but I do say the Practical English Handbook part was fascinating. I didn’t think it could happen, but it blows Elements Of Style out of the water. Here’s the prelude to the most concise, 45-page guide I’ve ever read:

“The purpose of this Handbook is to provide a quick, easy-to-use guide to grammar, correct usage, and punctuation. It is intended for use in the business office, in the home, and in school. Secretaries, writers, teachers, and students will find it especially useful. The Handbook is divided into 25 sections or chapters each covering an important aspect or problem in English. The book is designed so that it may be used as a step-by-step complete self-study English review. But, in addition, it is a complete reference handbook for day-to-day use whenever a question arises concerning English useage or punctuation.”

I’m not going to list each chapter, as I don’t want to write an encyclopedic post full of lexiconal morphemes. But I do want to highlight the Parts Of Speech chapter, the Sentence Patterns chapter, and the Punctuation Review chapter. There were more goods packed in short spaces than I could ever imagine. Just the information on commas alone was worth my price of tuition.

Speaking of the price of tuition, you’re probably wondering how I came up with the Masters Degree in English Language figure of $117,421.65. Well, I went to the University of British Columbia’s website and looked up the details of their Masters of Arts — English Language program. Here’s a snippet from the UBC MAEL page:

“The UBC English Graduate Program, one of the most vibrant and wide-ranging in Canada, has been awarding the M.A. degree since 1919. Students may earn the degree in each of two areas: English Literature and English Language. Indeed, the UBC English Department is one of the few departments in North America to offer a language program in addition to its literary programs.

The English Language program includes specializations in history and structure of language, discourse and genre analysis, and history and theory of rhetoric. Faculty members in the Language program teach and supervise research in descriptive linguistics, historical linguistics, cognitive linguistics, functional grammar, semantics, pragmatics, discourse analysis, stylistics, genre studies, and history and theory of rhetoric. Students in the English Literature program can take advantage of Language graduate courses; recent offerings include courses on reported speech and its rhetorical versatility across genres; the uses of classical rhetoric for contemporary critical practice; and cognitive approaches to the language of literature. By the same token, Language students can take advantage of the wide variety of Literature courses our department offers.”

Now, I’m not naïve enough to think I really can get the equivalent of an expensive, five-year university program by reading my fifty-cent book. I have a high regard for education and highly educated people, and I truly respect their degrees. But what I did buy with my half dollar was access to a wealth of knowledge in The New Lexicon Webster’s Encyclopedic Dictionary of the English Language.

I don’t know if you can stumble upon this language beauty in a used book store. If you can, by all means grab it. I do know, however, that you can get copies on Amazon. They list a used hardcover for a very reasonable $15.68.

Okay, Kill Zoners. Have any of you got a copy of The New Lexicon Webster’s Encyclopedic Dictionary of the English Language? And what English language resources do you recommend? The University of Kill Zone floor’s mic is now open.

Garry Rodgers is a retired homicide detective with a second career as a coroner in the Province of British Columbia. Now, he’s an indie writer with an eight-part series of based-on-true-crime stories as well as many stand alones.

44 thoughts on “My 50-Cent Masters Degree in English Language”