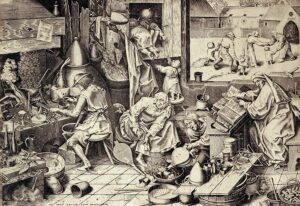 The Alchemist at Work, Pieter Bruegel, 1558

Alchemy was the medieval “science” of transmuting base metals into gold and silver, though its origins can be traced back to the Alexandrian Greeks of the early Christian era. The practice was based on the idea that all substances are composed of one primitive matter—the prima materia. By removing imperfect qualities from a base metal and adding other ingredients, the alchemists hoped to transform the material from rough to precious.

Legend has it that the source of this “knowledge” goes back to the Egyptian god Thoth, whom the ancient Greeks associated with Hermes. That’s why medieval alchemists called their work the “hermetic art.” They would put the “seal of Hermes” on their vessels, which is where we get our phrase “hermetically sealed.”

Of course it never worked, but that didn’t stop fraudulent alchemists from making a pretty ducat from unsuspecting patrons. One ruse involved a forged spike made of half gold and half iron. The alchemist would paint the gold half so it appeared to be iron. Then, in front of his patrons, he would dip the gold half in his brew (paint remover) and take it out, revealing gold! If the patron insisted on having the spike tested by a refiner, it would indeed be proven that there was actual iron and actual gold. How long the alchemist could get away with this before skipping town is a matter of conjecture.

But get this: alchemy lives on! For writers! (Though in a different form.) Let me explain by way of an email I recently received (quoted with permission):

I’m one of your fans. Purchased many of your books. Reading “How to write short stories and use them to further your writing career.” Thank you for writing this.

So, I read and agree that every short story worth reading and worth writing has a “shattering moment.” I know that you can place it in the beginning, middle or the end. I understand that it is a life changing event that happens to the character/s.

Do you have any suggestions on how I can learn more in order to deal with the above problems in my writing?

What this email alludes to is the difference between craft and what I’m calling alchemy. Craft is the nuts and bolts of what works to make fiction better. These are tools and techniques that can be learned and applied. It’s what we spend most of our time here at TKZ talking about.

But then there is the “certain something” that each individual writer brings to the keyboard. Some might call this talent, which cannot be taught. True enough, but what I suggest is that we consider talent our base metal. By removing impurities and adding ingredients, we can actually transform it into fiction gold.

The main impurity is your “inner editor.” That is the judgmental voice that assesses every creative move the moment you try to make it. It loves to reject things. It tells you what not to write. It makes snap decisions at the surface level.

The problem is that there is gold underneath the surface. You’ll never find it if you give the IE sway as you write. (The IE is only welcome in the editing phase.)

The way you turn off that voice is by writing through it. One exercise is the page-long sentence. You write 250 words without stopping and without using a period. If even for a second you start to feel nervous or fearful or embarrassed by what you’re writing, you write the next word and keep going. You only assess things after you’ve written, not before.

Doing this exercise frequently will weaken the inner editor until finally it shuts the heck up whenever you’re creating. (I might cleverly add that IE silence is golden.)

Now, what can we add? The short answer is: you. Your talent, your knowledge, your memories, your feelings…but not at the surface level. We must dig deeper, coaxing the hidden material to the surface.

The way I like to do it is to make brainstorming lists. As is true for most of us, the first thing that usually comes to mind is something familiar, even clichéd. That truck driver you need for the scene, is he wearing jeans, boots and a baseball cap? Go deeper! Make a list of other modes of dress. And a list of ethnicities. And does he even have to be a he? Aha, a whole new direction for brainstorming!

My rule of thumb is a minimum of five items on a list. Why? Because it’s when you get down to 4 and 5 that surprising, original material is sent up from the boys in the basement. Going on to 6 and 7 is a further adventure.

And remember, your inner editor has no business in your brainstorming.

So, to bring this back to the specific question from my emailer about short story writing: If you can’t identify a shattering moment from an anecdote, try this: write a page-long sentence in the voice of a character. Listen to her describe her emotions about the anecdote. Let her tell you how it is shattering. If she doesn’t know, ask her what she’s trying to hide. Keep after her! She’ll eventually confess.

Try the same thing with another character. Even another. You’ll eventually find the right narrator and thus the right story.

If you have a shattering moment but don’t know how to build a story around it, start making lists.

We often hear about the “art and craft” of something. That’s what this post has been about. Craft is necessary to shape a story into the best form. Art is the alchemy, the thing that cannot be taught. But it can be coaxed!

Over to you. How do you describe the talent part of our craft? How do you like to coax your creativity?

55 thoughts on “The Alchemy and the Craft”