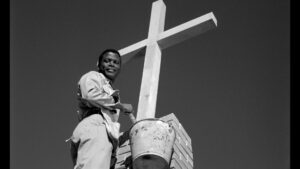 Sidney Poitier in Lilies of the Field (1963)

I believe writers are here to “bring the light.” It’s a dark world out there and most readers, I venture to say, don’t want more of the same in their leisure hours.

By that I don’t mean we avoid the harsher edges in our fiction. Indeed, that’s what the best thrillers take us through in order to deliver us at the end.

I do mean, though, that light (e.g., hope, justice) is a powerful—even necessary—element for today’s market.

Which brings me to the subject of lovely moments.

The other night Mrs. B and I re-watched one of our favorite movies, Lilies of the Field. This 1963 gem was a low-budget production that ended up nominated for five Oscars, including Best Picture and Adapted Screenplay. Sidney Poitier took home the Best Actor prize for his performance. Lilia Skala, the Austrian actress, was nominated for her supporting role (and should have won, in my humble opinion).

It’s the story of an itinerant worker, Homer Smith (Poitier), who is driving his old station wagon across the Arizona desert. His car needs water, so he pulls into the only homestead within miles. It turns out this is the humble dwelling of five nuns who are scraping out their subsistence by growing vegetables, raising chickens, and milking one cow. The nuns do not speak much English. We learn later they escaped over the Berlin Wall and came 8,000 miles to this desolate place.

The iron-willed Mother Superior (Skala) is convinced that God has sent “Schmidt” to them for a very special purpose—to build a chapel for the poor, mostly Mexican locals to attend mass.

Mass for this community is administered outside a local hash house by a priest who works out of a motor home. In a conversation with Homer, the priest admits that when he was ordained he prayed to be called to a majestic cathedral in some wealthy diocese. Now, he notes ruefully, he has to pray that his tires don’t blow out.

Near the end, with the chapel finished, the priest is brought in to see where he will now be saying the mass. He is so moved he can hardly speak. Finally, he says to the Mother Superior, “Many years ago, I made a very vain and selfish prayer. Now He has answered my prayer through you, through many people. I pray now I become worthy of His trust. And yours.”

A lovely moment. It’s with a minor character, but it deepens the emotional impact of the entire film.

So I’ve been thinking about how to add such moments to our fiction. Here are two prompts:

One of the best examples of this type of moment is from, not surprisingly, Casablanca. A desperate young wife asks Rick to answer the most important question in her life. She and her husband, refugees from Bulgaria, are desperate to get out of Casablanca, but need exit visas signed by the French police captain, Louis Renault. These visas cost serious money. The husband is trying to raise it in the gambling room, but is losing. The wife, however, has been approached by Louis (offscreen) with his standard offer—if she will sleep with him, he will grant the couple their visas. 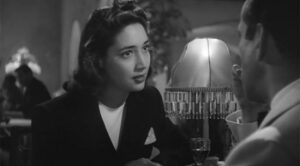 Then the wife wants to know something else:

“Monsieur, you are a man. If someone loved you very much, so that your happiness was the only thing that she wanted in the world, and she did a bad thing to make certain of it…could you forgive her?”

Bitterly, Rick says, “Nobody ever loved me that much.”

She goes on: “And he never knew, and the girl kept this bad thing locked in her heart, that would be all right, wouldn’t it?”

“You want my advice?”

“Go back to Bulgaria.”

But a few minutes later Rick goes to the roulette table and suggests the husband bet everything on 22. The croupier picks up the cue, and 22 wins. Rick says, “Leave it there.” And 22 wins again.

Rick tells the husband, “Now cash it in and don’t come back.”

A lovely moment. So lovely that when the Russian bartender hears what Rick has done, he rushes over to give Rick a kiss on the cheek!

This is also what I call a “Pet the Dog” beat, which is where the Lead forgets for a moment his own troubles in order to help someone who is weak or vulnerable. He doesn’t have to do so. Indeed, his action puts him in jeopardy (Louis begins to suspect Rick is not as neutral as he claims to be). But the action bonds us deeply to the Lead, compelling us to read on. 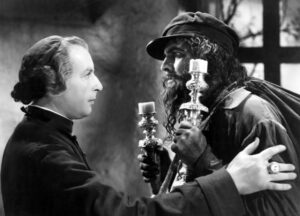 Who can forget the mercy shown to Jean Valjean in Victor Hugo’s Les Misérables? When the ex-convict is fed by a kind priest, Valjean repays him by stealing a basket of silverware. He doesn’t get very far before the gendarmes nab him and drag him back to the priest’s abode. They have caught him red-handed with stolen silver! Now all the priest has to do is make a complaint and Valjean will be back in prison forever. They are not prepared for what the priest does next:

“Ah! here you are!” he exclaimed, looking at Jean Valjean. “I am glad to see you. Well, but how is this? I gave you the candlesticks too, which are of silver like the rest, and for which you can certainly get two hundred francs. Why did you not carry them away with your forks and spoons?”

Jean Valjean opened his eyes wide, and stared at the venerable Bishop with an expression which no human tongue can render any account of.

“Monseigneur,” said the brigadier of gendarmes, “so what this man said is true, then? We came across him. He was walking like a man who is running away. We stopped him to look into the matter. He had this silver—”

“And he told you,” interposed the Bishop with a smile, “that it had been given to him by a kind old fellow of a priest with whom he had passed the night? I see how the matter stands. And you have brought him back here? It is a mistake.”

“In that case,” replied the brigadier, “we can let him go?”

The priest then gets the silver candlesticks and hands them to a bewildered Jean Valjean.

“Now,” said the Bishop, “go in peace. By the way, when you return, my friend, it is not necessary to pass through the garden. You can always enter and depart through the street door. It is never fastened with anything but a latch, either by day or by night.”

Then, turning to the gendarmes—

“You may retire, gentlemen.”

This is, of course, the great turning point in Valjean’s life. And an unforgettable moment in a classic novel.

What lovely moments in books or films are memorable to you?