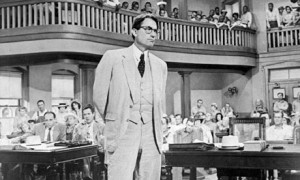 Gregory Peck in To Kill a Mockingbird (1962)

Happy Father’s Day. Allow me  to recommend some of my favorite books and movies about dear old Dad.

At the top of the list, of course, is To Kill A Mockingbird. Little needs to be said here. Both book and movie are timeless classics. If ever there was a role that was meant for a specific actor, it was Atticus Finch for Gregory Peck. The movie score by Elmer Bernstein is also perfection. I’ll admit it, as soon as that score begins in the opening credits, I’m already reaching for a Kleenex.

Speaking of which, I remember reading Avery Corman’s novel Kramer vs. Kramer when it came out in the late 70s. I was a few years away from marriage and fatherhood, but I was still blubbering at the end (please keep this to yourselves). The 1979 movie, starring Dustin Hoffman, Meryl Streep, and cute kid Justin Henry, is every bit as effective. 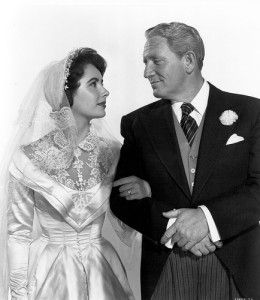 My favorite comedy on the subject is Father of the Bride (1950). Spencer Tracy plays the father of Elizabeth Taylor, who has become engaged. What follows are the stages of a bride’s father that seem as inevitable as the stages of grief: testing the young man about his financial future; meeting the in-laws; trying to keep down wedding expenses; surviving the emotional shakeups. It’s amazing that this comedy is as fresh today as it was back then. And yes, the ending has me at the Kleenex box again. (What is this going to do my rep as a thriller writer?)

On the other side of the spectrum is John Singleton’s 1991 urban drama Boyz n the Hood (very strong language, so be advised). Ten-year-old Trey is getting in trouble at school, so his mother Reva (Angela Bassett) decides he needs to go live with his father, Jason “Furious” Styles (Laurence Fishburne). When she drops Trey off, she says to Furious: “I can’t teach him how to be a man. That’s your job.” Furious becomes the solid rock in Trey’s life—teaching, admonishing, correcting. When he asks his boy what he knows about sex, Trey gives a boy answer. Furious replies, “Any fool … can make a baby, but only a man can raise his children.” The film cuts to seven years later and follows Trey and his friends through a series of encounters until the final, crushing climax. Trey almost makes a life-altering, criminal mistake, but once again his father is there when he needs him most. Outstanding performances by all, especially Cuba Gooding, Jr. and Ice Cube.

Speaking of solid-oak fathers, in the late 30s and into the 40s the quintessential dad was Judge James Hardy, played by Lewis Stone. He was the father of the irrepressible Andy (Mickey Rooney) who was in constant need of correction and advice. This series was wildly popular, sixteen in all, with Stone in fourteen of them. If I had to pick one to start with, it would be Love Finds Andy Hardy (1938), as it is the film that adds Judy Garland to the series (not to mention a young Lana Turner!)

And then there are father-son reconciliation films. These are the flip side of mother-love-and-sacrifice movies (e.g., 1937’s Stella Dallas.) The two that get me every time are October Sky (1999) and Field of Dreams (1989). 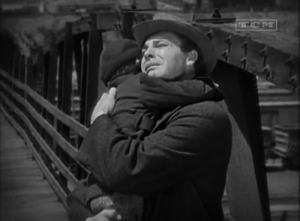 I want to mention one more movie that most people, sadly, are unfamiliar with. That’s because it comes from the rich history of silent films. King Vidor’s The Crowd (1928) is an unflinching look at the pre-Depression working stiff and what happens when optimistic ambition runs up against cold, hard reality. The climax is unforgettable, only this time it’s the young son who saves the father from destruction: “I believe in you, Pop!”

Any movies or books about fathers you’d like to add? And please feel free to share any memories of your own father if you are so moved.

As a special treat, here is a priceless moment from the old Dick Cavett show, where Groucho Marx sings the Harry Ruby song “Father’s Day.”