Last week I wrote about hardboiled fiction and the pedigree that began with a writer named Carroll John Daly. I focused on the First-Person PI narrator.

So what POV did I choose for my series about a crime-fighting nun, Sister Justicia Marie of the Sisters of Perpetual Justice?

I’ve written here before about the genesis of this character. How my son, who loves plays on words, said I should write about a nun who fights crime with martial arts skills. “You could call it Force of Habit.”

“I was only kidding,” my son said.

“It’s a great concept,” I said. “Original, great title, and I think I can do something with it.”

That was back in 2012. Since that first novelette (about 16k words), four more followed, and quite to my delight has built a loyal following.

Now I’ve put the whole series in one collection, and added a sixth, never-before-published novelette. FORCE OF HABIT: THE COMPLETE SERIES is up for pre-pub. If you reserve your copy now you’ll lock in the $2.99 deal price (and this puppy is 90k words worth of action) before it goes to the regular price of $4.99. The titles are: 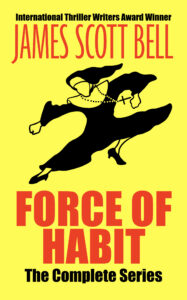 FORCE OF HABIT 2: AND THEN THERE WERE NUNS

FORCE OF HABIT 3: NUN THE WISER

And for the first time anywhere: FORCE OF HABIT 6: NUN TOO SOON

Allow me just a few horn toots from verified reviews:

“This first book was so good that within minutes of reading it, I downloaded book two.”

“Action packed with both internal and external conflict, I was riveted the whole way through.”

“Sister Justicia is kicking butt and taking names! She knows how to clean up L.A. but good!”

“James Scott Bell seems to be able to put more events in a 50 page novella than you’re likely to find in some 300 page novels.”

“Honestly, they need to make a TV series about Sister J.”

Now, back to the choice of POV. Having never been a nun…or a woman…I gravitated toward Third Person from the jump. That does not mean I couldn’t take a stab at First Person. Unlike some of the “wisdom” of the age, I say let a writer do what he or she will and let the market decide. I just felt more comfortable in Third.

So what about the nun-woman part? Well, friends, there’s a little thing I like to call RESEARCH. It really works! I have a friend who is a former nun, who helped me tremendously with this series. I also made contact with some Benedictine nuns online for further insight.

As for the woman part, I have the greatest research assistant of all—Mrs. B. She reads all my stuff before anyone else, and offers me invaluable editorial advice.

[And if I may be allowed a side note: Today marks the 40th anniversary of the best decision I ever made. It involved the lovely Cindy, a minister, a packed church, and me.] 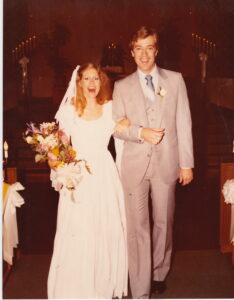 Once again, here’s the link for the deal pre-order.

For those of you outside Amazon U.S., you can open to your Amazon site and plug this into the search box: B091DRDWRJ

I will note that Michael Connelly is currently writing a series from a female Pacific Islander POV. And our own Mr. Gilstrap’s new series stars a U.S. Congresswoman who is also a single mom, both of which (if my research is accurate) John has never been.

And leave us not forget the sisters P. J. Parrish writing from the POV of one Louis Kincaid.

It can be done!