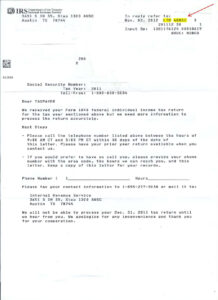 (Greetings to those of you who were not expecting me to be here today. You do not have the wrong Saturday (can there ever be a wrong Saturday?). Mark Alpert has moved on to other things and will be devoting his talented wordcraft to his adult and young adult novels, which we ask that you continue to seek out, purchase, and read. In the meanwhile, I will be filling in for the foreseeable future (this week, anyway) as well as posting on my usual spot on alternate Saturdays. Onward! Joe H.)

Some of you may recall that last year I had a close encounter with the Internal Revenue Service (IRS). I wrote about my experience in a post for TKZ titled The Churn of the Screw. I had another interaction recently for a different reason. and will share the additional knowledge that I gained. I feel that it is pertinent for this space since, if you are writing for income and actually earn a bit, you can expect a little extra attention from the IRS as does anyone who is engaged in self-employment.

My latest experience began with the receipt of a letter from the IRS on a Saturday. There apparently was some issue that required me to prove who I am. I was instructed to call an 800 number between 7:00 AM and 7:00 PM (PST) even though Daylight Savings Time was still in effect for another couple of weeks. The author of the letter also apparently took it for granted that I would know that those hours obtained only from Monday through Friday. Just for grins and giggles I called it anyway — on Saturday — and was told via voice recording that the office was closed. Fair enough.

I called back on Monday, at 7:00 AM (EDT) just to see if the PST the letter mentioned was in error. It was. I got a recording instructing me to hold. My call was ultimately answered after thirty or so minutes by a somewhat abrupt lady who exhibited some umbrage with me because I asked her to repeat her name and ID Number twice. I wanted to ask her to get the gumbo out of her mouth and slow down but I did not. I instead told her that I was a bit hard of hearing and was having difficulty understanding her.

Taxpayer Tip #1: An IRS representative is required to give you their name and ID Number. Write it down. If you don’t understand it, whether because of the line quality, hearing issues, or other problems, ask politely to have the information repeated, even if it irritates the representative. It will also slow the rhythm of the conversation down a bit in the event that the representative is inclined to pepper you with quick questions or otherwise rush you through things.

I then advised the representative that I received a letter and gave her the letter’s form number. She told me that the database for that information did not open until 8:30 AM and to call back then. She then hung up. I tried to call back throughout the day but after a two-minute greeting and instructions to “Press 1”  was told each time that due to high call volumes all representatives were busy and that I should call back. Click. I did connect at one point mid-afternoon but after being on hold for an hour and ten minutes I was disconnected. Click.

Taxpayer Tip #2: Don’t call the IRS or any government office on a Monday. I should have remembered this from prior experience. Call traffic dies down considerably on Tuesday and Wednesday before rising on Thursday and Friday but it is worst on Monday. I don’t know if the information I received about the database not being available until 8:30 AM was an outlier, a common Monday occurrence, or a rib. Not calling on Mondays makes that question unimportant, at least on a Monday.

I called back on Tuesday at 7:00 AM. My call was answered after a forty-five-minute wait by a very patient, polite, and pleasant gentleman. Apparently, the system being down until 8:30 AM was an outlier. Or something else. The representative, pleasant as he was, was having some sort of difficulty with the system which required him to put me on hold two times. We got disconnected during the second hold.

Taxpayer Tip #3: Most phones have a speaker system. If yours does, use it. Turn it way up so that you can put the phone down and write, read, go to the restroom, or prepare meals for the week while you are waiting on hold.

Taxpayer Tip #4: If you have a landline, use that line to call IRS instead of your cell phone. You don’t want to have defeat snatched from the jaws of victory by a dropped call. Oh, and if someone wants to put you on hold, ask for a direct dial number for them in case you are disconnected. I did that but was told no direct number was available.

Taxpayer Tip #5: Write and recite your own mantra of thanksgiving while you are waiting or when your call gets disconnected. Mine was:

“Be happy. I am in a nice room in a nice warm and dry house which contains coffee and food which I can sit and consume while wearing comfortable clothes. All else does not matter. Maybe, however, I should have bought that family pack of Chocolate Oreos.”

It took me a couple of tries but I did get back on the waitlist (as opposed to being told to call back later due to high call volume). My call was eventually answered by an absolutely delightful (that is Joespeak for “…and she laughed at my jokes”) young woman. It took about fifteen minutes to establish that I was and am me to the satisfaction of the IRS. She thanked me a couple of times for being prepared and having the documents requested in front of me.

Taxpayer Tip #6: Be prepared. Most letters from the IRS will contain a list of documents to have at hand when you call. Do so. It makes life easier.

I thanked the representative at the close of the call and told her that I was going to write to my Congressman and tell him 1) what a pleasant experience I had working with her that morning and 2) that whatever the Representative — whose name and ID Number I had dutifully written down — was being paid, it wasn’t enough.

I then did just that.

Taxpayer Tip #7: Give credit where due, when due. The IRS representative was up at 7:00 AM and was pleasant while doing her job competently. Most government employees are like sorcerers’ apprentices in terms of workload. They deal with lots of angry brooms all day long. If a tip of the fedora is warranted I like to give it out. It makes me happy to do so and hopefully makes the recipient feel appreciated. Who knows. It might even get them a small cash award or even a step increase.

That’s me for today. I hope that you never get a letter from a government agency. If you do, and even one of the above tips is helpful, that will make my day.

If you have any bureaucratic stories that you wish to share (and everything these days, from banks to internet service providers, is a bureaucracy) please do so. If not, we’re still happy to have you. Thank you for being here.

33 thoughts on “The Churn of the Screw Redux”