“The world is a hellish place, and bad writing is destroying the quality of our suffering. It cheapens and degrades the human experience, when it should inspire and elevate.” — Tom Waits 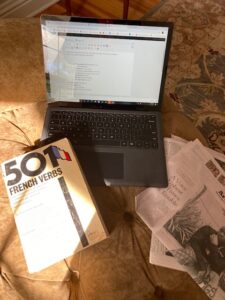 To be, or not to be? Nah, that’s too mundane for a novel. Even though it did work for Dr. Seuss. How about “exist?” That’s a nice variation. On second thought, it sounds too Descartes-desperate for a thriller. Sigh. Well, that leaves me with…”I live.” Good grief, as I live and breathe, why is it so hard to find the right verb?

You’d think this would be easy. Pick a noun, pick a verb. Repeat until you’ve written oh, about 300 pages that might resemble a novel.

But it’s not easy. Verbs are the lifeblood of what we do. The good ones juice up our writing and help readers connect with our plots and characters.

Here’s something I’ve found: Inexperienced writers tend to be content with the first verb that pops into their head. Heck, experienced writers, in the blind heat of the first draft, do this. (my go-to crutch verb is “turned.”) Often, when you’ve latched onto a dull verb, your subconscious writer mind knows it and desperately tacks on an adverb. “He said” becomes “he said sagaciously.” Lipstick on a verb-pig.

I’ve been thinking a lot about verbs this week. Partly, because I have been trying to brush up on my French via Babbel online courses. My brain aches because of this. Verbs are  important to the French and they take their conjugations very seriously. One slip of the reflexive and you’re in deep merde. (More on that later).

But verbs are on my mind also because a friend, novelist Jim Fusilli, posted on Facebook a terrific article by music producer Tony Conniff called “In Praise of Bob Dylan’s Narrative Strategies…and His Verbs.”

Now, I am not a huge Dylan fan, but I do appreciate that he is a poet. (officially). And as I read Conniff’s analysis of the song “Tangled Up In Blue,” I understood how powerful the right verb in the right place can be. Take a look at just one verse of the song:

She was married when they first met
Soon to be divorced
He helped her out of a jam,
I  guess, but he used a little too much force

Tangled up in blue.

Conniff says that most of the story is conveyed in vivid verbs — the action, drama, conflict and emotion. “The verbs tell the story,” he writes, “the story of how being with this other woman, probably for a one-night stand, led his thoughts back to the one he couldn’t forget or let go. Every verse, every chapter of the story, leads back to the same woman and the same impossible emotional place—Tangled Up In Blue.”

For my part, I love the title itself because in just four words and one great verb, Dylan captures the entire mood of his story. The man isn’t just upset about losing a woman. He’s not merely sad about an affair gone bad. He’s tangled up in blue, caught in a web of regret over the love he let slip away.

The right verb gives your story wings. The wrong verb keeps it grounded in the mundane.

Now here’s the caveat. (You know I always throw one out there.) Not every sentence you write needs a soaring verb. “Said,” as we’ve said over and over, is a supremely useful verb that, rightfully so, should just disappear into the backdrop of your dialogue. And in narrative, when you’re just moving characters through time and space, ordinary verbs like “walked,” “entered,” “looked” do the job. If you try to make every verb special, you can look pretentious and, well, like you’re trying to hard. Sometimes, smoking a cigar is just smoking a cigar.

Let me give you some examples off my bookshelf of verb-age that works:

Here’s the ending of Chester Himes’s short story “With Malice Toward None.” Himes’s verb choices convey the mood of a defeated man whose soul-killing WPA job is driving him to drink and to distance himself from his materialistic wife:

He wheeled out of the room and downstairs away from her voice but at the door he waited for her. “I’m sorry, baby, I — ” then he choked with remorse and turned blindly away.

All that day, copying old records down at city hall, half blind with a hangover and trembling visibly, he kept cursing something. He didn’t know what exactly it was and he thought it was a hell of a thing when a man had to curse something without knowing what it was.

This is from John D. MacDonald’s The Deep Blue Goodbye, showing how strong verbs can spice up your descriptions. McD didn’t give us much description but when he did it came with sweet economy.

Manhattan in August is a replay of the Great Plague of London. The dwindled throng of the afflicted shuffle the furnace streets, mouths sagging, waiting to keel over. Those still healthy duck from one air-conditioned oasis to the next, spending minimum time exposed to the rain of black death outside.

Verbs are important in action scenes. Here we are, in a good one from James W. Hall’s Off The Chart:

On the top rung of the rope ladder, Anne Bonny paused and found her breath. Head down, crouched below the gunwale, she gripped her Mac-10, formed a quick image of her next move, then sprang and tumbled over the rail, ducking a shoulder, slamming into the rough pebbled deck, and rolling once, twice, a third time until she came to rest against an iron wall.

And here’s a paragraph from SJ Rozan’s novel Absent Friends, where a character remembers the September 11 attack:

Phil had been caught in the cloud on September 11, running like hell with everyone else.

His eyes burned, his lungs were crazy for air. A woman next to him staggered so he reached out for her, caught her, forced her to keep going, warm blood seeping onto his arm from a slash down her back as he pulled her along, later carried her. Somewhere, someone in a uniform took her from him, bore her off someplace while someone else pressed an oxygen mask to his face. He breathed and breathed, and when he could speak, he asked about the woman, but no one knew.

The lesson here is, the more intense your scene, the more measured you should be in your verb choices. Trust the reader to intuit, to imagine between the lines. “Running like hell” is cliche but it works because it is true to Phil’s voice. It sounds like his thoughts. Notice, too, SJ’s repeated use of the ambiguous words — someplace, someone, somewhere — to capture the chaos, rather than hitting the reader over the head with something like: “He felt confused and disoriented.”

And let me add one more quick example that James Bell quoted here on Sunday, in his post about deep back story, from a Stephen King short story. One line jumped off the page for me:

Sometimes they discussed children puddling along the wet sand with the seats of their shorts and their bathing suits sagging.

God, that’s great. It’s not even a real verb, but can’t you just see those kids on the beach? 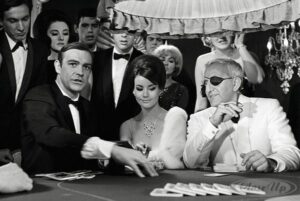 Okay, an exercise! Let’s use the poor old verb “walk” as a lesson here. Your character is a sophisticated spy entering the Casino de Monte-Carlo to meet the evil villain Emilio Largo. He’s not just walking in; it’s a grand entrance that sets up the next plot point. How do you describe this?

I like No. 1 for its spare feel. It imparts only the bare choreography. You’d have to find other ways to convey the tension and the hero’s intent. No. 2 relies on a tacked-on adverb to convey Bond’s attitude. It works okay, imho. No. 3 is tone-deaf and over-wrought. “Sauntered” is an okay verb but way too twee for Bond. And then we get hit over the head with the king metaphor, made even worse by the panther nonsense. If your verbs are strong, you don’t need to surround them in a thicket of thorny metaphors. No. 4 works, imho, but I’d try to make it better on second draft.

I will leave you with one last thought about getting your verbs right. When I first started learning French, my teacher warned us that French is filled with faux amis — false friends. Some verbs look correct but become something entirely else if you mess up the pronunciation or use the wrong tense.

One day in class a guy, speaking in halting French, said that last night his girlfriend kissed him goodbye. Our teacher laughed and we all just looked at each other, confused. In French, a kiss is “un baiser.” So the guy assumed the right verb was “baisser.” Which correctly means that last night he was…screwed.

A sigh is just a sigh, But a kiss isn’t always just a kiss.

20 thoughts on “Tangled Up With Verbs”