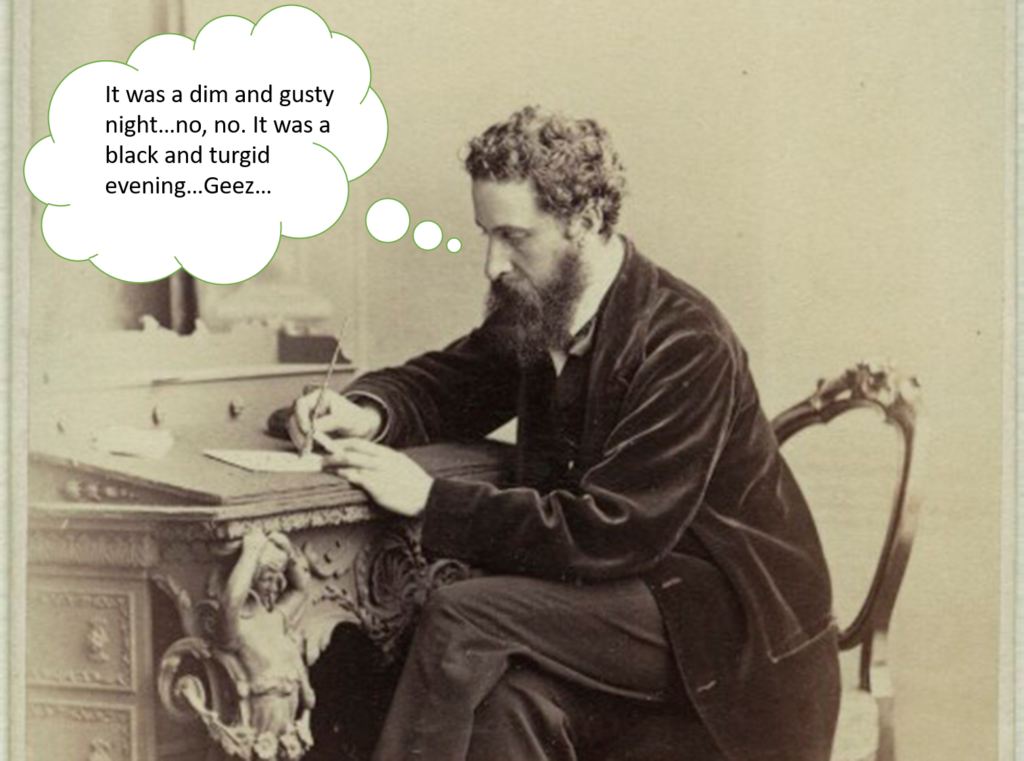 I’m a little under the weather this week, so this one will be short and sweet. Okay, not sweet. Maybe snarky. Or snirky with chuckles. Because what else can you be when you are confronted with the utterly stink-ola winners of the Bulwer-Lytton Fiction Awards?

You know Edward Bulwer-Lytton, right? (That’s him above, by the way). He’s the writer who gave us the wonderful “It was a dark and stormy night…” It was the opening line of his 1830 novel Paul Clifford:

It was a dark and stormy night; the rain fell in torrents — except at occasional intervals, when it was checked by a violent gust of wind which swept up the streets (for it is in London that our scene lies), rattling along the housetops, and fiercely agitating the scanty flame of the lamps that struggled against the darkness.

So many things we could pick apart there, right crime dogs? First, contrary to the advice of Elmore Leonard, he starts out with the weather. Second, contrary to James Bell, he slips in a — gasp! — semi-colon. Third, he TELLS us we’re in London instead of finding a graceful way of showing us his location. And fourth, the rest is just a hot wet mess.

To be fair, Edward Bulwer-Lytton was considered quite the writer in his day, even more popular than Dickens. He coined the phrase “the pen is mightier than the sword” and “the almighty dollar.” And he gave us the useful barb “the great unwashed.”  Among Bulwer-Lytton’s lesser-known contributions to literature was that he convinced Dickens to revise the ending of Great Expectations to make it more happily-ever-after.

So how did Edward become a Snoopy cartoon punchline? Back in the ’80s, a San Jose State graduate student named Scott Rice, was sentenced to write a paper on a minor Victorian novelist of his choosing and opted for Bulwer-Lytton. Years later, Professor Rice came up with the idea for the contest. The contest became an international phenomenon, getting thousands of entries every year.

I love reading these every year. (Click here to read them all) The winners are, to me, the Lucille Balls of writing. Lucy Ricardo was infamous in I Love Lucy for being tone-deaf, but Ball herself was an accomplished singer.  Likewise, it takes a pretty darn good writer to write wretched stuff on purpose. So, without further ado, here is the Grand Prize winner for 2020, by Lisa Kulber of San Francisco:

Her Dear John missive flapped unambiguously in the windy breeze, hanging like a pizza menu on the doorknob of my mind.

Now, we critique a lot of opening lines here at TKZ, so let’s examine why this works so well. First, there is the substitution of the word “missive” for the merely banal “letter.” Then we get the nicely active verb “flapped,” but it is gloriously underlined by the adverbial hair ball “unambiguously.” And then, the pièce de résistance — the vivid simile “hanging like a pizza menu” overlaid by the metaphoric wonder “the doorknob of my mind.”  It takes real talent to mix both simile and metaphor…so gleefully gelatinous.  I am in awe.

Okay, a couple more. And this one, crime dogs, is near and dear to our black hearts. The First Prize Award in Detective Crime Fiction this year went to Yale Abrams of Santa Rosa, Ca.

When she walked into my office on that bleak December day, she was like a breath of fresh air in a coal mine; she made my canary sing.

Man, that’s good. Short, sweaty…definite sense of mood here, right? And notice how gracefully Yale manages to convey that our narrator is male without even telling us? Let’s move on to the Detective Fiction Dishonorable Mentions. And we don’t even have to leave the pebbled-glass office to do it. From Jarrett Dement of Eau Claire:

She sauntered into his smoke-filled office with legs that, although they didn’t go quite all the way to heaven, definitely went high enough for him to see that she was a giraffe.

What I love about this opening is the amuse-bouche at the end. This is so pedestrian until we get to the unexpected injection of raw animal passion at the end. Here’s another from Paul Kolas of Orlando:

The first thing I noticed about the detective’s office was how much it reminded me of the baggage claim at a nearby airport: the carpet was half a century out of date, it reeked of cigarettes and cheap booze, and I was moderately certain that my case had been lost.

Such an assured sense of voice at work here. You will never mistake this writer for Patricia Highsmith. Onward, to a gem from Leo Gordon of Los Angeles:

The fact that the cantor’s body was covered with a lamb shank, salt water and a mysterious concoction called charoseth, led Chief Passover Homicide investigator Ari Ben-Zvi to describe the pattern of murders as “uneven, perhaps unleavened.”

Kudos to our writer for dropping us right into an action scene — the discovery of a dead body. As James always says, act first, explain later. And I love the symbolic use of the charoseth. It is a sauce used in seders, composed of bitter herbs and sweet fruits, so obviously the writer is using it to set up the idea that this murder will create mixed emotions, a nice motif to support his theme.

And here is our final winner, from Belinda Daly of London.

Handsome French policeman, Andre Poiret, grappled with the puffed-up albino hitman, who was about to shoot the beautiful high-class call girl, Gigi Lamour, who was taking a shower in her apartment, with his big gun.

Again, we are smack-dad in an action scene. No throat-clearing here. Note the adjective “handsome,” which of course tips us off that Andre is the hero. Ditto “beautiful” which tells us Gigi will be a love interest before she is found floating face down under the Pont Neuf in chapter 20. And leave it to a great stylist to leave the best for last — “with his big gun.”  Obviously, a subtle hint at the sexual tension underscoring the story’s romantic subplot. It couldn’t have been placed more zestfully.

And with that, my friends, I am off to have a good hot shower and a strong martini, one olive and two Advils, please.