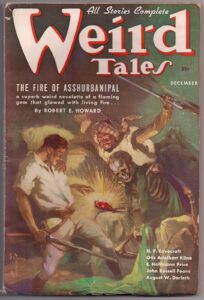 Okay, kids, we have a first page to discuss. Let’s read it and chat on the other side.

Barbarians clashed on the road to Heliopolis. Three were stout, blue-bearded Sherdens, one of the tribes of sea-folk that sailed forth to harry faltering Egypt. They wielded long, leaf-bladed swords and were protected by horned helmets and bronze-banded corselets, augmented by round shields emblazoned with bulls heads.  One of their number already lay dying, a spear tangled in his guts. She who cast that spear was as alien to the land of the Pharaohs as the Sherden, though she came by a longer and more circuitous route. A green-eyed giantess, pale of flesh and tawny-haired, standing a good head taller than her sea-faring opponents. She was incongruously clad in the manner of a Persian soldier, with a bronze-scaled cuirass over a linen tunic and trousers thrust into soft leather boots. Like a lioness cornered by jackals she battled her tormentors, lashing out from behind a tall wicker shield with a sagaris, the deadly battle-axe of the Persians.

A Sherden made a bold thrust, seeking her vitals, but his blade transfixed the wicker shield instead, narrowly missing the woman’s sinewy forearm. She twisted to one side, tangling the sword in the wreckage of the shield. Unwilling to release his weapon, he was upended and tumbled to the ground. She let the ruined shield fall with the hapless swordsman, and his comrade, seeing an opening, lunged recklessly in an attempt to decapitate the tawny-haired she-devil. Moving with preternatural speed she sidestepped his powerful blow. As the momentum from the spent attack sent him stumbling past her, she brought down the axe, shearing through his horned helmet and splitting his skull in a welter of blood and brains. He fell, sprawling in the dust that thirstily sucked up his flowing blood.

JSB: Ah, nothing like blood and brains to get us going this fine Sunday. Let me say some good things up front. I like this writer’s imagination. There is a vivid “other world” here, and the potential is bubbling in the pot.

In some ways it reminds of the great Robert E. Howard, and the many stories he did for Weird Tales back in the 30s. He could build a world and clash the swords unlike anyone before or since. This author has similar raw material; we just have to chisel it so it makes for gripping fiction.

First off, a tip about readability these days. No one likes big, blocky text. This entry is made up of two Brobdingnagian paragraphs. A browser opening up this book might take a look at the page and think, “Why bother?”

True, readers of epic fantasy are perhaps more tolerant of blocky graphs. But not all, so why turn off a significant percentage of readers when it’s so unnecessary? No one is going to complain that your first page isn’t hard enough to read. So break up the blocks! This page could easily be four to eight paragraphs. (Which reminds me of when Yogi Berra was asked if he’d like his pizza cut into four or eight slices: “Better make it four,” he said. “I don’t think I can eat eight.”)

Now to the heart of it. World building in any kind of speculative genre is a crucial part of the program. But the trick is to do it without overlarding us with details. Our brains (those that aren’t split by an axe, that is) cannot adequately process or appreciate too many unique details coming at us in a rat-a-tat fashion. We will either have to slow down and re-read, which ruins the flow; or we’ll set the book aside, which ruins the chances of selling the next book in the series.

In the first paragraph alone, I count at least sixteen unique details, all demanding to be a picture in my head, and two stopping me cold and sending me to the dictionary (cuirass, sagaris):

The point is there’s an exciting fight going on, but my head is swimming with all these details. There are just too many.

So how many should there be? Ah, there’s the skill part of the equation. The answer is: just enough.

Thanks for stopping by.

Okay, let’s put it another way. Don’t let details derail the action. You, author, will have to develop a sense about this. It may be that you’ll require outside eyes to look at your pages: beta readers who are familiar with the genre, crit partners, perhaps a freelance editor.

What you want is an action scene with essential details. Pick a few that best set the stage and flow them in naturally with the action. In fact, that may be a good rule of thumb (though many writers bristle at rules, and use their thumbs primarily on the space bar): allow yourself only 2 – 5 unique details per page in the opening chapter. Everything else should be action.

One more crucial craft point will help you in this quest: pick a point of view! This passage is in Omniscient, which tempts the author to put in all the things they see in their imaginary world.

If, on the other hand, you filtered this action through the POV of a character, you would naturally become more selective in the detail work; plus, readers will be more fully engaged because it is through character that readers bond with the material. A twofer!

Right now you’ve got three Sherdens and one “she-devil.” We have no way of knowing who, if any of these, will be a main character. Maybe this is a prologue and no one here will end up being the MC.

No matter. You still should choose one of these characters to be the viewpoint. When you do that, the action of the scene will automatically take precedence over the details. And that’s what we’re after. [Note: Third Person POV is usually the better choice, but even in Omniscient POV you can select a viewpoint character. See the excerpt below.]

For laughs I looked up a Robert E. Howard story from the January 1934 edition of Weird Tales. Here’s the opening paragraph from “Rogues in the House,” a tale featuring our favorite barbarian, Conan:

At a court festival, Nabonidus, the Red Priest, who was the real ruler of the city, touched Murilo, the young aristocrat, courteously on the arm. Murilo turned to met the priest’s enigmatic gaze, and to wonder at the hidden meaning therein. No words passed between them, but Nabonidus bowed and handed Murilo a small gold cask. The young nobleman, knowing the Nabonidus did nothing without reason, excused himself at the first opportunity and returned hastily to his chamber. There he opened the cask and found within a human ear, which he recognized by a peculiar scar upon it. He broke into a profuse sweat, and was no longer in doubt about the meaning in the Red Priest’s glance.

Notice that we start with action and two named characters. How many unique details does Howard give us? One: small gold cask. No derailment here. We are caught up in the mysterious exchange (an ear? Really?) and what it could possibly mean. Nothing distracts us from the action, which is a hallmark any Howard story.

Others may have some advice, too, so let’s hear it. Help our anonymous writer out.

10 thoughts on “The Dangers of Detail Derailment”