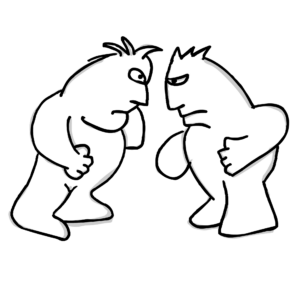 Not many people know that the decades-long feud between the Hatfields and McCoys started at a writers conference. The head of the Hatfield clan was an outliner. McCoy was a pantser. They were on a panel together and things got heated. Then the shooting started.

In those days, several McCoys were heard to say that they had to write the book in order to “discover” what the book was really about. If they got tied down to an outline, that’d take all the originality and “fun” out of the writing. They’d chew tobacco when they said such things, and every now and then they’d spit and say something about how an outline removes spontaneity (although they didn’t know words like spontaneity). A McCoy once remarked, “Them ’liners don’t never have no surprises. They don’t discover nuthin’. Got no use for ’em.”

Well, the guns are put away now, but the outliner (plotter) v. pantser divide is still grist for the panel mill. What I want to home in on today is this notion that the best method for “discovering” your story is by not knowing what you’re going to write until you write it. That way the whole thing is organic and surprising. And if the author is surprised (so goes the reasoning) the reader surely will be surprised as well.

Implied in this is the idea that plotters are stuck with their outline and are thus discovery challenged.

I’m going to blow that notion up.

First, let’s follow a typical pantser. She begins writing about a character…that’s the “fun” part. The character has some sort of issue or problem, but we don’t know what it is yet, or how it will manifest itself. At the 15k word mark, our pantser wakes up one morning with a mind-blowing idea—the abusive antagonist actually turns out to be the brooding boy from the MC’s past. Wowsers! That’s not what she expected! But that’s what she loves about pantsing!

Full of delight, our pantser writes another 20k words along this new trajectory, until the plot begins to stall because there’s not enough conflict, or the love part isn’t working, or things have moved too quickly and the book is close to being over … or any of an infinite number of plot problems that pantsers have to figure out how to solve—now, or in the messy future when they take a tangled, unkempt first draft and try to make it something readable.

But the big discovery—that the antagonist is really the boy from the past—remains. To change it now would mean starting at ground zero again, and that’s not a happy thought.

So what’s happened? The pantser got to a major plot path, one that sprang up one day and said Take me! and she took it. One path. And maybe it works out.

Or maybe it doesn’t. Still, the pantser contends that this discovery method is “purer” storytelling than some stodgy old outline.

To which the plotter says, “Hold on there, Lightning. You need to understand something. We enjoy even more discovery than you, and faster, too! It happens before we outline. We look at many paths and follow them as long as we like. Each one is a surprise; we’re not limited to one or two. We can then pick the most exciting one and start to outline. If something better occurs to us along the way, easy…we tweak the outline. Discovery after discovery!

Which is a little more freeing that finding one discovery after thousands of words of writing.

Let me give you look at my own process. I always start with a “white-hot document.”

I got this idea from one of my first, and most beloved, craft books, Techniques of the Selling Writer by Dwight V. Swain. He advocated writing a stream-of-consciousness document, where you just let your imagination run wild. No editing. Jot whatever plot, character, scene, big picture ideas hit you. Follow tangents wherever they lead. The next day you come back to this document and annotate. Highlight the best parts, then start writing again, following your imagination wherever it goes. Annotate the next day. Repeat this process several days.

David Morrell has a similar practice as explained in his book The Successful Novelist. He advocates asking yourself question after question, getting yourself deeper into the reasons you like this idea.

What’s happening is I’m letting the imagination and subconscious play, bringing me surprise after surprise. But I’m not yet wedded to any!

Next, I get a bunch of 3 x 5 cards and go to a coffee house and grab a large brew. I find a chair and start writing down scene ideas. Randomly. Without thought as to where they go. It’s enough just to jot this much:

Sister J has to fight a knife-wielding dental hygienist.

Later, I shuffle the cards and take out two at a time to see what plot ideas they suggest. In effect, I’m taking dozens of paths, checking out the scenery, and choosing the best one to follow.

I’m also fleshing out the members of my cast, remembering the principle of “orchestration.” That is, each character ought to be different from the others so there’s a possibility of conflict with everybody else.

Finally, I start laying out my Super Structure signposts, setting up the major movements of the plot. I have plenty of scene ideas to go in between. (I use Scrivener for this.)

Now, I fully realize dedicated pantsers are to outlines as mosquitoes are to Off. And that’s fine. You’ve got to go with what works for you, what brings you the most creative joy. The point of my post today is to emphasize that there’s joy and creativity and spontaneity in plotting, too…and in buckets!

So put down your muskets and tell us: how do you do most of your discovering?

38 thoughts on “What’s the Best Way to Discover Your Story?”