Old English was originally written in the runic alphabet, named futhark after the first six runes: f, u, th, a, r, and k. The alphabet consisted of 24 letters, 18 consonants, and 6 vowels. Futhark assigned a sound to each character. Runes could be written in both directions—right to left, left to right—and could also be inverted or upside down. The earliest runes consisted almost entirely of straight lines, arranged singly or in combinations of two or more. Later, runes became more complex. Some even resemble modern day letters of the English alphabet.

Side note: Think outside the box as you read. There’s a question at the end to get your creative juices flowing.

According to rune experts, the word “futhark” itself may have been used for ancient Norse magic. An example of this can be found carved into the tooth of a brown bear, found in Orkney in the 1930s. It’s said this amulet was used for protection or fertility magic. 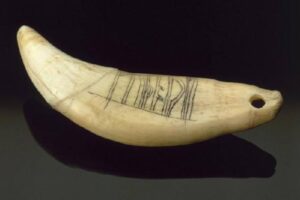 In Old Norse the word “rune” means “letter,” “text,” or “inscription.” In old Germanic languages it means “mystery” or “secret.”

For years researchers have tried to crack a runic code called Jötunvillur, a perplexing code found in some inscriptions. Ancient codes prompt associations with treasure hunts and conspiracies as depicted in The Da Vinci Code.

But mysterious codes are not just for fiction.

Real-life Vikings and medieval Norse people carved runic codes into wood, stone, swords, pendants, and other objects. These codes are found in many forms and contexts.

“It was very common to use codes,” said Runologist Jonas Nordby from the University of Oslo. “Much of the population mastered them. That’s why I think they were something people picked up at the same time they learned the runic alphabet. If you had learned to read and write, you had also learned codes.”

Some of the decoded messages showed a playfulness among friends. Others were more romantic, like the 900-year-old cipher code carved into a piece of wood (pictured below). The inscription reads “kiss me.”

These codes exist in many forms and contexts and date back to the 11th or 12th century. But there’s still a lot we don’t know about runes.

Why did Vikings encrypt their messages by using codes? Did they want to keep them secret, or did they have other reasons for encrypting their ruin texts?

Runologist K. Jonas Nordby has made significant progress toward an answer by cracking a code called jötunvillur, which has baffled linguists and historians for years.

Jötunvillur is just one of many different types of runes. This code works by exchanging the rune sign with the last sound in the rune’s name.

Problem is, numerous runes end in the same sound.

“It’s like solving a riddle,” Nordby said. “After a while I started to see a pattern in what appeared to be meaningless combinations of runes.”

Many of the messages in runic codes include a challenge to the reader to crack the code, like “interpret these runes.” The art of writing and codebreaking ensured a certain amount of status among peers. Others bragged about their proficiencies, evident by the inscription below that reads, “These runes were carved by the most rune-literate man west of the sea.” 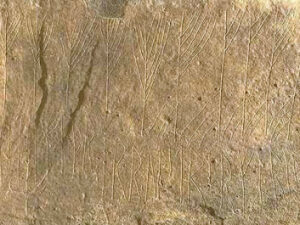 “Many think the Vikings used cryptography to conceal secret messages,” Nordby continued. “But I think the codes were used in play and for learning runes, rather than to communicate.”

One of the reasons for his claim is that the jötunvillur code is written in a way that makes the interpretation ambiguous.

“A typical bunch of male adolescents were fooling around and wrote tall tales about treasures and their own sexual prowess. Jötunvillur can only be written, not read. It would be pointless to use it for messages.”

Hence why he’s considered other possible uses for the code. His best guess would be that the Vikings memorized rune names with the help of the jötunvillur code.

“We have little reason to believe that rune codes should hide sensitive messages. People often wrote short everyday messages. I think the codes were used in play and for learning runes, rather than to communicate.”

All runes have names, but their similar sound makes it difficult to figure out which runic letter the code refers to.

“People challenged one another with codes. It was a kind of competition in the art of rune making. This testifies to a playfulness with writing that we don’t see today.”

Nine of the 80 or so coded runic writings Nordby investigated are written in the jötunvillur code. The others are cipher runes written with the use of Caesar cipher, a system involving a shift to letters spaced a few places away in the alphabet. Researchers have understood cipher runes for some time.

Henrik Williams, a professor at Uppsala University’s Department of Scandinavian Languages and a Swedish expert on runes, said Nordby’s discovery is an important one.

“Above all, it helps us understand that there were more codes than we were aware of. Each runic inscription we interpret raises our hopes of soon being able to read more. This is pure detective work and each new method improves our chances.”

He agrees the codes could have been used as a tool for learning runes. But he’s not certain about how big a role jötunvillur played in the learning process. Rather, he thinks the codes were used for much more than communication.

“They challenged the reader, demonstrated skills, and testify to a joy in reading and writing.”

What better reason could there be?

Have you ever used codes in a story? Please explain.

Get those creative juices flowing, TKZers. In what ways could a writer use runic text?

20 thoughts on “The Secret Language of Vikings”