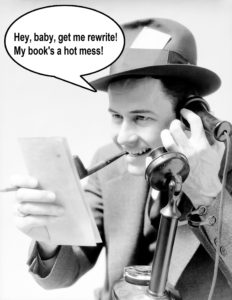 “There is only one way to eat an elephant: a bite at a time.” — Desmond Tutu

I know many of you will relate to this. You’ve finished your manuscript. {{{cheering from the peanut gallery}}. You set it aside for the recommended two, three, four weeks, as long as you could stand it. Now, you open that file and…

Rewrite time. Black cloud over the head because the task ahead is daunting. Where to start? Is it worth it? What if it stinks?

I have a little rewriting to do this week. Not just polish the chapter I just finished. Not just fix the problems with my muddy middle. Not just tweak the opening. I have to rewrite The. Whole. Darn. Thing. All thirty-four chapters. All 371 pages. All 102,542 words. Well, not every word. I just stuck that in to get the sympathy vote.

And here’s the kicker: This book has already been published. It is our first Louis Kincaid novel Dark of the Moon, which was published in 1999 by Kensington. A while back, the rights reverted to us, along with six others in the series, and we quickly repackaged them with new covers and put them up on Amazon, where they have enjoyed a nice little renaissance and have helped keep my dogs in Fromm’s Chicken au Frommage.

But when we got to working on Dark of the Moon, we decided to put on the brakes.  Why? Well, as we re-read it, we realized that while it was a smacking good plot with lots of twists and cool clues, and it nicely introduced our series character, it had some issues.

So, what to do? Slap on a new cover and get it out there anyway? Or take a second whack at it and fix the things that didn’t quite work the first time?  We chose the latter. Now, lots of folks might think this is not a good thing for a writer to do, that good, bad or ugly, you should just let your early books live as they came into the world. I don’t buy that. I say, with technology now available to alter and republish your work with minimal sweat, why not improve things?

Don’t get me wrong, it is a good book and got some great reviews (except for Kirkus, who hated it) and some sweet blurbs (including one from our own John Gilstrap who said, “this is a novel not to be missed”). For a freshman effort, it was something I remain proud of.  But Kelly and I have learned so much since that first time out, and after a lot of discussion and soul-searching, we decided the story deserved better than we gave it.

Louis Kincaid, a bi-racial cop raised in a foster home in Michigan, has to return to his birth place in Mississippi to see to his dying mother. A temporary hire with the sheriff, he lands a big case when a skeleton is found in a shallow swamp grave — with a noose around the neck bones. The case plunges Louis into a cold case and a dark past that no one in the small town of Black Pool wants to talk about. The case will tear the town apart even as it impels Louis to question his own biracial identity.

So what were the issues? I’ll lay them out one by one because I suspect some of you might identify with some of the problems we encountered. Maybe this self-autopsy can help you, maybe not. But I think it highlights a couple of the very problems any novice novelist deals with.

Over-Writing.  I wish I had read Stephen King’s On Writing before we wrote this book. He’s brutally eloquent on the subject of editing out flab and affectations. We had all three going, especially with our descriptions.   King says, “The key to good description begins with clear seeing and end with clear writing, the kind that employs fresh images and simple vocabulary.”  What it is NOT is trying to be writerly, larding on the adjectives or straining to poop out a metaphor. “Clear seeing and clear writing.” That’s all it takes.

Okay, an object lesson. Here’s the original opening graph of our book:

The naked trees snaked upward, black capillaries against a bleached, pre-dawn sky. The ground beneath his feet was a mire of dead leaves and copper-colored mud. A cold December wind wafted through the trees loosening raindrops from the needles of the tall pines.

Now I’m gonna do a First Graph critique of it:

The naked trees snaked upward, black capillaries Why TWO metaphors? Pick one: vipers or veins! against a bleached, pre-dawn Just clutter here because you say it’s after dawn two graphs later. sky. The ground beneath his feet Where else would the ground be, under his armpits? And who is “he”? was a mire of dead leaves and copper-colored I love alliteration! It’s so…writerly. mud. A cold December Ah, you told us it was December in the tagline wind wafted Now here’s some W-alliteration! through the trees loosening raindrops from the needles of the tall pines. Just say it’s sprinkling and move on.

The sky was a bleached gray, the bare trees rising like black veins against the clouds. The ground was soft and wet, a mire of dead leaves. With every cold breeze, the three men were sprinkled with the remnants of last night’s thunderstorm.

The rest of the book was in pretty much the same over-wrought style. There was a good reason it ran more than 100K words — we didn’t know when enough was enough.

Lesson 1: Fluff and fart all through your first draft (F-alliteration!). But come rewrite, be ruthless with your imagery. As Coco Chanel said, put on all your jewelry, then take off every piece but one.  Not just images; cut all unnecessary words. If you have King’s book, go to page 275 where he shows you exactly how he edited one of his stories.

2. Stereotyping. If you are writing about something controversial, iconic or overly familiar, you have to be on hyper-alert to avoid cliches. We were writing about a small southern town in the early 1980s with a sordid racial history. So many shoals to navigate and we did…okay.  But we decided that we owed this little town better, that our bad guys were too easy to hate, our good guys too self-righteous, and our ideas about the south to glib. (Kelly, for the record, lived in Philadelphia, Miss. for years, the site of the infamous civil rights murders and that was partly her inspiration.) But if you are dealing with such a fraught subject as the south’s racial history, you have to do so with sensitivity and depth. Our sheriff was too bumbling. Our secondary characters too one-dimensional. Our setting was too magnolia-scented. We didn’t look deep enough.

Lesson 2: If your setting is iconic (Paris, Las Vegas) don’t go for the usual visual cliches. Look more closely for what the reader doesn’t expect. Take them to corners  they can’t find in their Fodor’s. This lesson served me well when I wrote our stand-alone set in Paris The Killing Song. The Eiffel Tower is glimpsed only briefly through the trees as our hero is en route to the Gout d’Or Muslim neighborhood where few tourists ever go.

3. Cardboard Characters. I mentioned the sheriff already, but his deputies were even worse. One fellow, Junior Resnick is a plump, lazy good ‘ol boy. And he speaks in dialect. Now, we can do a whole blog titled “Don’t Do Dialects” (and I think we have) but I’m running long, so suffice it to say that if you’re doing Southern, or Cockney, or urban black, don’t try to replicate exact language. Don’t lop off endings like “He was jus’ plum f**kin’ crazy.” (Junior says this). A character can have a distinct regional voice, but do it via syntax and simple word choice and trust the reader to remember it.  Yes, I know about Huck Finn, but you’re not Mark Twain and it’s not 1884.

Now, let’s talk about Southern women. Whee-doggies, did we mess this one up. We have two major female characters, an aging wealthy patriarch named Grace and her beautiful willful daughter Abby. (Paging Miss Scarlett!) We did an okay job with Grace (almost) but we blew it with Abby. She’s a stereotypical prissy belle who throws herself at Louis just to make Daddy crazy. We didn’t understand what made her tick, we didn’t know WHAT SHE WANTED. And if we had asked to go to coffee (see Jim’s Sunday post), she would have sat there like a stump. So Kelly and I did a lot of hard thinking about these two AND their mom-daughter dynamic. Abby is being transformed into a serious somewhat repressed woman struggling to find an identity outside her family’s expectations. (which reflects’s Louis’s own inner struggle as black man). She doesn’t fling herself at Louis but finds in him a porcupine-ish friendship. She is a work in progress right now, but I already like her so much more. And Grace? She’s morphing into a complex character who’s coming to realize she left her true self somewhere in the past and now resents her daughter for being what she herself lacks the guts to be. Which ties into one of our new themes — the painful birth of the new South from the womb of the old.

Lesson 3: When creating a character, whatever your first idea is, stop and question it. Then dig deeper to go for the second or even third incarnation. Pull back their layers until they scream and give up their ugly secrets. That is where the beauty is. That is where your story will spring from. And don’t be afraid of what they reveal. One last quote from Stephen King:

I’m convinced that fear is at the root of most bad writing. Dumbo got airborne with the help of a magic feather; you may feel the urge to grasp a passive verb or one of those nasty adverbs for the same reason. Just remember before you do that Dumbo didn’t need the feather; the magic was in him.

Which is a long way to go to finish up my opening elephant metaphor. Now if you’ll excuse me, this post ran longer than I intended and I have a lot of pruning to do.

24 thoughts on “How To Rewrite Your Whole Darn Book”