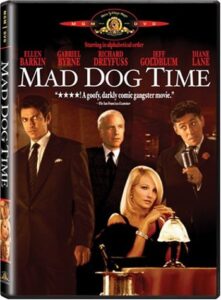 I submit to you that a personal recommendation from a friend with respect to a book, movie, or film is gold. I’ve been fortunate to have had a number of folks who know my eclectic and yes, flat-out bizarre tastes in the various arts and who keep me from becoming staid in my reading, viewing and listening. Chief amongst these good, long-suffering folks is a gent who I have known for well over a half-century. My friend possesses an encyclopedic knowledge of literature and films which runs long and deep. He recently recommended a movie to me that is almost a quarter-century old but is still in some ways ahead of its time.

The movie is Mad Dog Time.  It is worth viewing and studying for a number of reasons, chief among them being the manner in which it adheres to its puzzling yet addicting voice and pace from beginning to end.  You say you’ve never heard of it? Maybe you know it by its other name, Trigger Happy. Still doesn’t ring a bell? I’m not surprised. I had never heard of it either until last week, in spite of it having a stellar cast (Richard Dreyfuss and Jeff Goldblum, among others). It suffered from poor reviews. Actually, that’s not right. The reviews were vicious.  It topped at least one “worst movie of the year” list. Rotten Tomatoes? As I write this Mad Dog Time has a critics’ score of 17 percent based on six reviews against an audience score of 47 percent. It grossed six figures and cost seven to make, proving that you can make a small fortune in the arts if you start with a large one.

I’m leading with all of the bad stuff about Mad Dog Time because that was the way it was introduced to me before I bit the hook. The sharp end of that is that Mad Dog Time is a gangster/caper film that defies several conventions.

The opening moments of Mad Dog Time consist of what is kind of a poor man’s Star Wars trailer which informs the viewer that what they are about to see takes place in an alternate reality. Yeah. That’s about right. The plot is right out of the late 1940s. A mob boss named Vic (played by Dreyfuss) who owns a popular nightclub is being released from a mental health facility after several weeks of treatment for what we would now call anger management. A rival mobster who has been plotting to take over Vic’s empire is bringing in hitmen to get the job done, given that Vic has a reputation for engaging in homicidal violence with minimal provocation.  Mickey Holliday (Jeff Goldblum) is Vic’s enforcer and finds himself standing between Vic and the power grab. Mickey, however, has in Vic’s absence been keeping company with Vic’s girlfriend while also seeing her sister, unbeknownst to either of the siblings. Other things are going on, including frequent duels by firearm that take place in the basement offices of Vic’s club. There are other shootouts, as well as fights, double-crosses, and the like, right up to almost the very end of the film.

If all of the above was presented in a straightforward manner then Mad Dog Time might not have gotten the awful critical reception it received. The film has its quirks, however. Mad Dog Time was written and directed by Larry Bishop, the son of comedian Joey Bishop, who was part of what was known as the “Rat Pack” with Frank Sinatra, Dean Martin, and Sammy Davis, Jr., among others. There are a number of not-so-subtle references to that lineage, including a brief appearance by Joey Bishop. What is more interesting, however, is that the entire film looks like a period piece for which the director never attempted to acquire time-appropriate props. It is accordingly is a 1940s story that looks like it was filmed in the 1990s — which is when it was filmed — and which somehow doesn’t look dated in 2020. That doesn’t make sense, but it is entirely accurate. Bishop also repeatedly uses a plot device that is unsettling and which violates a rule of commercial filmmaking. I’m not going to tell you what it is, but you’ll see it when you watch the film and start saying “What the (heck)” every ten minutes.  I kept thinking, “Wait a minute! He can’t do that!” That isn’t quite accurate, of course. Maybe Bishop shouldn’t have done it, but he could do it, and he did. The result is that the viewer never knows what is going to happen next.

At least one of your favorite old school actors, regardless of who it might be, is more than lkely in Mad Dog Time. What was interesting for me is that it features an actor I can’t stand — Jeff Goldblum — leading the cast. And you know what? Goldblum gives the performance of his life. I never would have pictured Jeff Goldblum as a believably deadly mob enforcer who is also studly enough to be balancing relationships with two women to the extent that neither is the side-piece (or maybe they both are). I almost didn’t watch the movie when I found out that he was in it, but I’m glad I did. He hasn’t looked this good since he played “Freak #1” in the original (Charles Bronson) version of Deathwish. Goldblum is so good in this film that I actually missed him when he wasn’t on screen.

There’s also an intangible element existing in Mad Dog Time. The entire movie is just a bit off-kilter, which is possibly where the alternate universe thing comes in.  My friend likened it to the manner in which Billie Holliday often sang just a beat or two behind the music. It’s a perfect comparison, so much so that I wonder if Larry Bishop was giving his audience a hint of it with the name of Goldblum’s character.

You won’t find Mad Dog Time/Trigger Happy on any of the streaming services. There is a print that is accessible on YouTube but the video is totally out of sync with the audio and it is thus unwatchable. You should, however, be able to find it in DVD format (which is excellent, by the way) at your local library though you might have to hunt for it. You should do so. 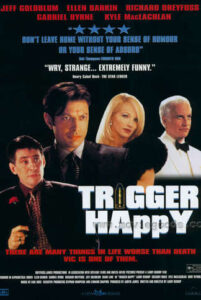 Let me give you two more quick suggestions before I leave you to your day:

In books, Andy Davidson’s newly published The Boatman’s Daughter is the perfect Southern Gothic horror novel and may be the perfect novel, period. If you read it and you like it you will want to read his first book, In the Valley of the Sun, which concerns a pair of vampires on the loose in Texas during the fall of 1980. Fun stuff.

As far as music is concerned, I have recently been listening to a band named 16 Horsepower. They are no longer together. The creative force behind their music, however, is a gentleman named David Eugene Edwards who currently helms a band called Wovenhand. Edwards is considered to be the father (almost, after Johnny Cash) of a music subgenre known as “gothic Americana.” The songs in both bands are darkly religious with a heavy emphasis on the failings of human beings, who will be judged by the angry and vengeful God of the Old Testament. Not surprisingly, Edwards’ music has been rejected by secularists for its religious overtones and by the Christian rock community for hewing too close to fundamentalist beliefs. What’s left? Well, Edwards has a huge following among atheists, believe it or not, especially in Europe. If nothing else, please have a listen to 16 Horsepower’s “Black Soul Choir.”

I hope that you enjoy all of the above and have a terrific and entertaining weekend. And please, feel free to offer some obscure recommendations of your own.

20 thoughts on “A Miss That Should Have Been a Hit”