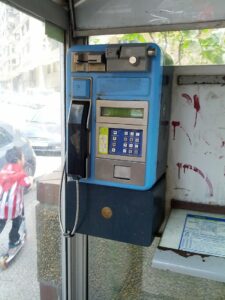 I feel for Charlie in this story opener when he makes a phone call that risked his pride and ego. Join me in reading this 400 word opening and providing constructive criticism in your comments. I’ll have my comments below.

Charlie examined the slip of paper and wondered if he had been set up. It could have been some random set of digits she pulled out of her head? That shit happened once before and it ended up being the number for Dial A Prayer.

Charlie fed the payphone, and the muscles in his neck tightened as he dialed. He recalled the cute turned-up nose, dimples, and full pouty lips of the girl at the concert. He struggled to believe he’d worked up enough nerve to ask for her number and was suspicious of the ease with which she gave it to him.

Finally, the first ring sounded. He waited for someone to pick up, but took a breath when he realized no one answers on the first ring.

The second came, and his stomach rumbled.

As the third arrived, hope began to fade.

After the fourth, he relaxed, thinking either she wasn’t at home, or his suspicions were true. Then, a click, and there came the smooth, soft, voice of a sleepy angel.

“Hi, this is the guy who sat behind you at the concert. I hope you remember me. Anyway, I only have a couple of minutes to impress you. So, here goes. I think you may well be the prettiest girl I’ve ever seen in my life. I got my own place. I like every kind of music there is except opera. Dogs love me, and oh, I don’t remember if I mentioned this, but I think you are, without a doubt, the prettiest girl I’ve ever seen. Okay, how am I doing so far?” It felt like a year-long silence as he waited for her response.

“Well, Dude, you are most definitely full of shit. And that’s okay. On good days so am I. Of course, I remember you. And I’ve been hoping you’d call.”

Sonny, paused. I felt your eyes on me in the concert and when I turned around everyone in the audience was scoping out what was happing on the stage. But you were looking straight at me with the sweatiest smile. That’s what made me remember you.

“And dude, If I’m the prettiest girl you’ve ever seen, you need to work on your social life.”

All the typos were obstacles to me truly enjoying this anonymous submission. Even the last line and name of a main character is misspelled. More misspellings: happing & sweatiest. Editing 400 words for clean copy is the least an author should do to make it harder for an editor or agent from rejecting the story right away. Enough said. Let’s get to the substance.

Overall Impression – I liked the first line where Charlie hints of a set up. That got my attention. The tension was quickly diffused by the revelation that Charlie is calling a girl, so I didn’t mind that this wasn’t about a crime. I thought Charlie was charming and I could relate to the risk he took.

General Questions – Charlie is using a payphone? In a technical age, why doesn’t he have a cell? If this is a retro story line, that should be tagged at the beginning to ground the reader in another decade. Plus, is ‘Dial A Prayer’ still in existence? I queried on the Internet and only found a reference to a 2015 movie. Charlie mentions that a girl had slipped him a ‘Dial A Prayer’ number, but wouldn’t that have to be an 800# since that’s a national service? If a girl slipped him a phone number that starts with 800, that should’ve been a clue. These details kept me from getting fully engaged, beyond Charlie’s story.

Setting – Where is the setting? What is Charlie doing as he makes a call from an old payphone? World building is important. Did he slip away from his apartment to make a call from a public phone? What city or town? What can be shared about Charlie? This feels like a stripped down first draft without depth. The bones might be here, but it needs more.

To help an author realize what layers are missing, I like to ask open ended questions to trigger ideas from the author. Questions like: Where is Charlie? Can the weather add tension or mystery to the scene? Does Charlie have money? Does Sonny? Can their clothes give insight into their lives? What other open ended questions would you ask, TKZers?

Add More Tension & Build Up – The long dialogue line where Charlie tries to charm Sonny with “Hi, this is the guy who…” is long and the reader might lose interest or the build up could be better. I would suggest the author break up Charlie’s lines with how he reacts as the tension builds. When he hears nothing on the other end of the line, he keeps talking. We’ve all gone through phone calls like this. Make the reader feel his mounting doubts and the risk he finally takes to spill his guts.

“Hi, this is the guy who sat behind you at the concert. I hope you remember me.”

The girl left him hanging and didn’t bail him out. Dead silence. Charlie decided to keep talking and go for it. He had to bring his A-game, whatever that is.

“Anyway, I only have a couple of minutes to impress you. So, here goes.” He swallowed and took a deep breath.

“I think you may well be the prettiest girl I’ve ever seen in my life.” What a tool. You sound lame, Charlie. Give her your best stuff. Go for it.

He pictured her mesmerizing blue eyes staring at him and how lights from the stage last night had played on her blond hair. Don’t sound like a stalker, asshole.

“I got my own place. I like every kind of music there is except opera. Dogs love me, and oh, I don’t remember if I mentioned this, but I think you are, without a doubt, the prettiest girl I’ve ever seen. Okay, how am I doing so far?”

It felt like a year-long silence as he waited for her response.

Point of View Shift – Before this scene ends, Sonny’s Point of View (POV) interrupts Charlie’s moment. I found this jarring and editors and agents would see this as head hopping. Sonny hints that she might have an ulterior motive to giving her number to Charlie. As a general rule of thumb, I write each scene using one POV. I tend to pick the character with the most to lose or the most emotion. To revise this intro, I like Charlie’s vulnerability for the start, but then create a scene break and shift to Sonny’s POV to draw the reader into her mystery. But when you jumble both together, you lose the impact for both.

First Person Shifts to Sonny – Another craft issue is that when the POV shifts to Sonny, the tense changed to first person. A whole book of this will confuse the reader, especially if, within scenes, Sonny starts speaking in first person in the middle of Charlie’s third person.

HERE is the POV shift to Sonny – Sonny, paused. I felt your eyes on me in the concert and when I turned around everyone in the audience was scoping out what was happing on the stage. But you were looking straight at me with the sweatiest smile. That’s what made me remember you.

As I’ve suggested, the author might consider staying with Charlie’s third person POV as the intro, because he is relatable and vulnerable and there’s a mystery for readers to get into. End his first scene, then pick up Sonny on the other end of the line. What is she doing? What has Charlie interrupted? I often have fun with a simple outsider person calling my protagonist and they talk as if it’s a normal call, but I clue the reader in on what my protag is doing – like killing someone, or cleaning up blood.

Title – ‘Sunny Days Ahead’ needs work as a title. There’s nothing intriguing about it and no mystery.

SUMMARY – I look forward to seeing other comments and opinions on Sunny Days Ahead. For me, I might want to read the book jacket to see what this story is about. I like Charlie, but this intro needs filling out. Sonny holds promise in my mind, but nothing here tells me that. It’s my hope. Thanks for your interesting submission, anonymous. You have bones to build on here. I hope my feedback and the comments from our members will stir your imagination to fill out this story. Good luck.

Feedback comments, TKZers? Would you read on?

12 thoughts on “Whose Story Is it? First Page Critique: Sunny Days Ahead”