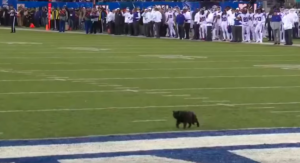 This past week on Monday Night Football between the Dallas Cowboys and the New York Giants, play was interrupted for a short time when a black cat somehow wandered onto the field.

No one knows where it came from or (as of this writing) where it is now. It’s probably hiding somewhere in the bowels of MetLife Stadium, coming out only under cover of darkness to forage for hotdog stubs, popcorn bits, and field mice.

TV cameras captured the drama as Stadium security and state troopers closed in. The cat, juking like a four-footed Ezekiel Elliott, eluded capture before dashing into a tunnel.

The moment inspired the clever sports writer and podcaster Charlotte Wilder to create a winsome account of the incident. It amounts to the cat’s backstory, which I found to be instructive for writers.

Wilder names the cat Shelly Whiskers (for you youngsters out there, Shelly Winters was an Oscar winning actress of yesteryear). Wilder imagines that the dash across the field was the moment Whiskers had been hoping for all her life.

That life did not begin in promising circumstances:

The bleachers weren’t a place from where a cat wanted to be. The most privileged cats—the ones that were combed daily and fed expensive organic food marketed to their owners on Instagram—grew up in houses full of soft surfaces to sleep on and cat trees to scratch. But the bleachers were home for Whiskers. Those cement stairs littered with empty cans, peanut shells and hardened nacho cheese shaped her.

Life at home was tough for Whiskers:

Her father, Mister, worked nights at a local bodega, meowing at customers who came in to buy a lighter or a bag of chips. Sometimes they’d drop him a piece of pepperoni from a slice of pizza, but most nights he came home empty-pawed. Whiskers’s mother Fluffy disappeared when she was very young.

But Whiskers had a dream. After seeing a squirrel on TV run across the field during a Green Bay Packers game, she thought, Why can’t I? She fell in love with the Giants star receiver, Odell Beckham, Jr., but when he was traded away, she went to pieces. Whiskers started hanging out in cat dives, like The Meow Inn, “knocking back shots of cream.”

Then came her moment. And Whiskers was all over it. As she eluded capture, stadium fans cheered and millions of television watchers did the same. Whiskers’s proud father summed it up:

“Shelly taught us that no matter who you are—a pampered house cat or a stray from MetLife—you should always chase your tail. I mean, your dreams. Definitely chase your dreams, not your tail.”

Which is a good place to talk about your own main character’s backstory. Have you given her a dream? A longing? A desire deep within her soul?

No character enters your story without a history. Note, you don’t have to know that history before you start writing. While many writers create extensive histories for their characters, others like to let characters develop (“come to life”) as they write. But even if the latter is your method, how the character behaves on the page implies a background, even if you’re not specific about it

Why not be specific and give your character a dream which animates her behavior?

Luke Skywalker dreams of being a Jedi knight.

Dorothy Gale dreams of living in a land where trouble doesn’t exist.

George Bailey dreams of leaving his small town and exploring the world.

What we dream about is a big part of what shapes us and moves us to action. The same is true for your protagonist and, I might add, your antagonist:

The Wicked Witch of the West dreams of dominating Oz.

Dreams lead to drive, which helps a story take off from the jump.

So what is your character’s dream? If she doesn’t have one, why not give it to her as a force in operation as your story begins?

Give a listen to sportscaster Kevin Harlan having fun with our wandering cat as he called the Monday Night Football game on national radio.

29 thoughts on “Give Your Character a Dream”