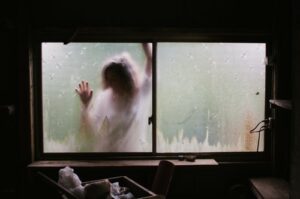 Today I’m giving you a bit of an update and a short observation. Let us start with the former. Some of you may recall my blog “…for the repose of the soul…” which I posted at TKZ on June 16, 2018. It concerned a husband who murdered his wife at their home on the street where I live during what had been a peaceful and quiet early summer evening. They had been separated for an extended period but were trying to work things through. The incident was accordingly totally unexpected.

The husband was almost immediately arrested and jailed  The aftereffects of his actions roiled and rippled beneath the surface of neighborly encounters over the next several months. Conversations on the street either began or ended with a discussion of what had occurred and what would happen next. If there was any benefit at all to what had occurred it was that everyone on the street became just a bit closer. Folks who before had only waved in passing stopped to talk for a few moments or longer and there were a couple of block parties where those assembled talked out what had happened but discussed other things, too. The husband ultimately in November 2018  pled guilty to a charge of aggravated murder pursuant to a plea agreement which guarantees his imprisonment for the next two decades without the possibility of parole.

Time and life have moved forward now that justice of a sort has been obtained.  The home where the couple lived and raised their children, the home where the evil deed was committed, was extensively redecorated. There was some question as to what would happen to the house and how quickly, whether a buyer would find it sooner rather than later or if it would be on the market for an extended period of time, given the history. It actually sold very quickly. The new neighbor moved in on a quiet, snowy day in February 2019. She is delightful, a very down-to-earth person of southern origin who leads with a twinkle in her eye and who is a bit of a character around the edges in all of the best ways. When I first met her I told her that I was glad that the house had a new owner so quickly, given that people tend to shy away from places where darker incidents have occurred. Her response was that in such situations the problem is with the people who commit the actions and not the house. Just so.

It is the house, however, which she ultimately decorated for Halloween a few weeks ago. And what decorations they are. She has transformed her front yard into a graveyard, with tombstones sprouting from the ground like toadstools after a summer rain. She has giant spiders — I mean these are big-posterior spiders — crawling up (or is it down) the front of the house around the upstairs windows. The most noteworthy decoration, however, can be found on the front porch. The entrance is festooned with hazard tape and the front storm door features with bloody handprints and the words “HELP ME” written in crimson. 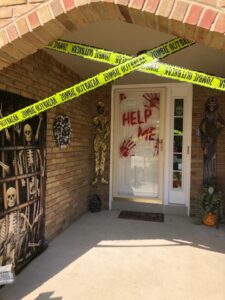 Now for the observation. What does it say about me that I find this by turns to be wonderfully appropriate and hilariously inappropriate in ways that I have difficulty describing? Not everyone on the street is amused as I am, of course. A couple of my neighbors whispered to me that the display was in poor taste. My response was that if they felt strongly about it they should take up a collection and start paying our neighbor’s mortgage and property taxes. Otherwise, it’s her home, and she can decorate it for Halloween the way that she wants. The most telling reaction came from the neighbor across the street from her, who with his wife was best acquainted with the husband and wife who are respectively now in prison and deceased. The close neighbor said that, if our late neighbor were able to do so, she of all people would probably enjoy the display the most. I get that. It’s exactly the way I would want to be remembered, should I meet my unplanned but inevitable demise in a memorable if notorious way.

There’s more than that going on here, however. I can recall when people who were moving into a new domicile would invite a clergyman over to bless the home. Nobody called it an exorcism, and that wasn’t the form of it by any means, but it was done not only with the hope of keeping things reasonably happy and peaceful going forward but also chasing out any nasty emotions that might be lingering and hiding in the rooms, corners, and cupboards. I think that is what my very practical and savvy new neighbor is doing. That’s my observation and I’m sticking to it.

So let’s raise a glass a frosted glass of apple cider (or your favorite fall beverage) to that most macabre of holidays just past, when tastes, rich or poor, are celebrated. If you have any similar stories, be they recent or long ago, that raised a “tsk” or two when they occurred, please share. And thank you as always for being here today.

28 thoughts on “Clearing Out the Spirits”