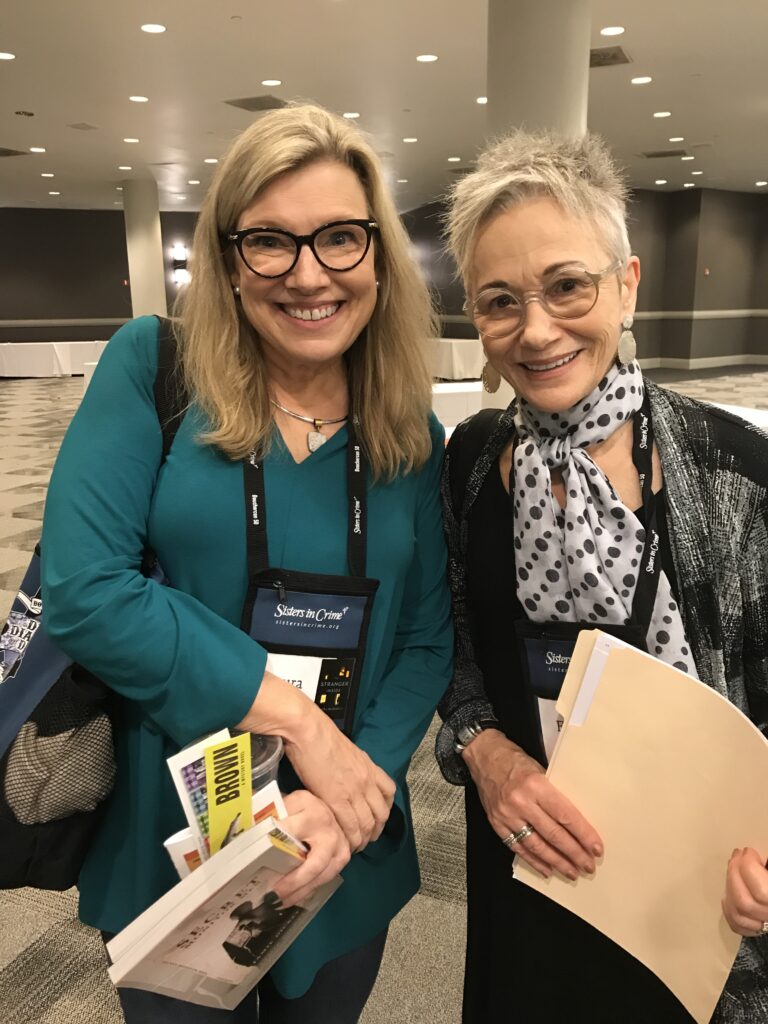 The Tuesday after I returned from Bouchercon 2019, my therapist congratulated me on experiencing my first non-neurotic conference. No, I don’t mean the conference itself was non-neurotic, because I can think of few things with higher potential for neuroses than 1700 writers, industry professionals, and fans, all gathered in one hotel. I mean, of course, that I was way less neurotic than I usually am at these things. How did I manage it? I decided to have a really good time, and do exactly what I wanted to do the whole six days I was there.

Things didn’t start so great, as I told pretty much everyone I spent more than 10 minutes with. (Okay, maybe that was a little neurotic.) It was a good airline story though. It took me 9 hours, plus an hour’s travel on either side, to fly from Houston to Dallas because of rainstorms. Yes, I could have driven there and back and halfway back to DFW again in the time I spent waiting for a plane. Our first plane got grounded at Hobby Airport before it could head to IAH, and then the crew timed out. I counted 15 “your flight will now depart at…” emails in my box.The 737 we finally got at 5:30 only had 30 people on it, including the crew, because so many people had to rebook. Sweet. Too bad my room service burger that night was nearly raw instead of medium well. They fixed it with reasonable promptness, returning a medium well burger (no bun, as requested), with fries I didn’t order. I confess I ate a few.

One reason conferences can be super stressful for me is my pantser, not plotter, nature. Though I’m pretty shy, this time I made a couple of lunch plans and a dinner plan with friends before I arrived. Those have always been risky asks for me. What if they don’t want to? What if they’re waiting for someone more interesting, more famous to come along and make a date? It turned out that one of the lunches and the dinner fell through, but I didn’t panic. I asked other people. How revolutionary was that?! A couple of them were busy, but several weren’t.

I also gave into the (albeit small) risk-averse side of my nature. Talk about food deserts. There were few restaurants within easy walking distance. To make matters more challenging, the temperature was frequently 60 degrees or lower. In the midwest, where I live, 60 degrees is positively seasonal for late October. But if you’re hanging out with some folks from southern Texas and Atlanta, you’ll soon find that you’ll be taking a lot of cars. because they have little desire to walk in the cold. And that was okay. I just popped up my app and away we went.

Back to the food…The always-delightful Judy Bobalik found us a French restaurant called Bouillon for lunch on Thursday. I liked it so much, that I brought people back for Friday lunch and dinner. Yep. Same restaurant three times, over two days. Did I mention it was delicious? Sadly, I did not receive a frequent diner discount. I also discovered a marvelous restaurant called Saint Ann’s when I perused reviews on the Open Table app.

A thing l did only once: Hang out at the bar in the evening. Conference bars are frequently hard-surfaced, crazy noisy, and crowded. I hate that cocktail party atmosphere where the person you’re talking to is often scanning the room for their next conversation. Though I’d be a horrible prig if I got upset about those situations. They’re perfectly normal and very human.  Now, I do enjoy a bit of gossip, and drunk people are great about leaking things. (I’m shameless, I know!) But I don’t drink much myself. I happily overshare when sober. It’s much more fun to me to visit with people one-on-one, or with groups in the lobby or the coffee bar. Do I sound like a terrible frump? Oh, well. I’ve done my time in conference bars, and once you’ve heard one drunk writer’s story about his 4 hour Viagra priapism (God rest his soul), you’ve heard them all. 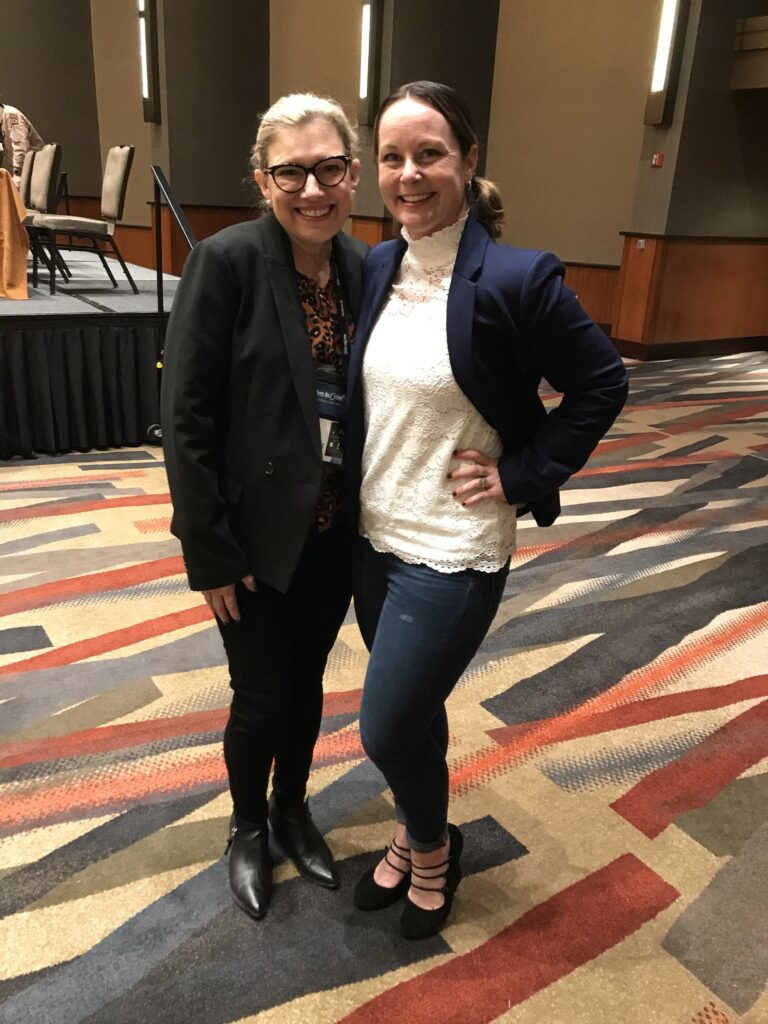 More fangirling, this time over Therese Plummer, the FABULOUS audio narrator for The Stranger Inside. She also does Charlaine Harris’s Aurora Teagarden books.

A thing I did a lot of: Go to panels and interviews. I’ve attended conferences where I didn’t attend a single panel except the one I was on. This was mostly in the days when I would hide out in my room, freaking out because I was afraid I’d made some horrible faux pas. Or I was simply terrified to be around so many writers. What if they figured out I was a fraud and didn’t belong there? I decided just to get over that–or at least stress about it back at home. Conferences are short. There’s no time for too many neuroses.

I got to see/hear Charlaine Harris, Elizabeth George, and Meg Gardiner on panels or interviews twice each. Elizabeth George practically gave a masterclass in how she writes during her interview. (Brava, Hallie Ephron, for great questions.) I took in a panel on setting, and also one on cozies. I went with my talented friend, Rebecca Drake, to Half Price Books for an evening panel, and we all went out to a 24 hour BBQ place, where they had killer brisket. I’m always surprised when writers disdain going to panels. For probably the first time, I took out the pocket schedule the first day, and marked the panels I didn’t want to miss. And I was careful to include the one I was on and the one I moderated, because I can get distracted.

A thing I didn’t do: Author Speed Dating. I’ve done them the last 3 Bouchercons I attended, but not this one. One, they started at 7 in the morning! 8 is madness, 7 is just cruel to everyone. Also, there was some confusion about whether they were invitation-only because of a publisher’s involvement. If true, that would be a real shame. Bouchercon is a fan conference, and it’s important to seek out new potential fans.

A thing I regret doing: Giving a big, warm hug without warning to a woman I’d only corresponded with a few times. Clearly, I made her afraid. What can I say? I’m a hugger.

A last pitch: Go to conferences if you can. Be friendly, open to new experiences, and leave (most of) your neuroses at home. You’ll have a better time for it!

Do you go to conferences? What’s your favorite thing about them? Least favorite?

9 thoughts on “Are You a Neurotic Writer? Sometimes You Need to Leave That Stuff At Home.”