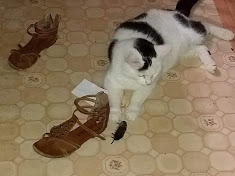 It is October. Dark and light chase each other as they battle for supremacy,  a conflict which the dark is pre-ordained to win at this time of year. A potentially paralyzing ennui has a tendency to sit in and take its grip on some of us during this time of year. There are many ways to break this, such as turning on every light in the house, reading that backlist of your favorite author, blasting music, binge-watching a television series on your favorite streaming service, or all of the above, sometimes at the same time. Still, for writers, the flow of ideas with the transformation to sentences occasionally tends to ooze like syrup rather than flow like water. At such times we would be wise to consider the housecat.

Yes. The housecat. It has so prestigious a title, yet so little to do. Its brain cannot conceive of us as anything other than giant cats (so we are told) which possess opposable thumbs, placed on earth to do their bidding on demand, even if we are doing something more important (such as listening to The Complete Prestige 10-Inch LP Collection by Miles Davis) or otherwise. Fennec, my own black-and-white cat, occasionally interrupts his eat/litterbox/sleep/repeat cycle to request entry to my attached garage. Herein lies the lesson.

The garage for Fennec is what the mind is to writers. We search our minds for ideas. Fennec, particularly at this time of year, goes into the garage in search of mice. Rodents find the garage to be attractive at this time of year due to its (relative) warmth. It took me a while to figure out why Fennec, immediately after entering the garage, rolls around on the garage floor. I figured out that he is masking his scent. Once Fennec is sufficiently garage-odiferous he waits patiently for a mouse — the idea, if you will — to manifest itself. Sometimes Fennec waits on the floor. He at other times sits atop the car, like a vulture on a branch. A mouse eventually appears. Fennec pursues. Sometimes he comes up empty. When I open the door and he comes in empty mouthed he appears to be forlorn, the same way that we do if an idea fails to bear literary fruit. If Fennec catches something, however, he runs into the house triumphantly, with the mouse — his completed novel — in his mouth. He tosses it up in the air and catches as he runs from room to room without missing a beat as I — his most avid reader — chase after him, hoping that 1) the mouse is squeaking in the Choir Invisible or 2) the mouse is stunned enough that I can get it into a plastic bag and dispose of it before it scatters off into an inaccessible corner of the house where it will no doubt bear a litter.

We’ve gone through this Mr. Punch routine several times in the past two weeks. To paraphrase Yogi Berra, I’ve learned a lot by watching. I’ve been taught that ideas will come and will be transformed into sentences. I just need to wait patiently. I also need to be ready to pounce when they manifest themselves. And yes, I am allowed to throw them in the air, juggle them, and catch them if the mood strikes me. As are you.

Enjoy October and Halloween. I hope you catch what you seek. In the interim…what have you learned about writing, life, or anything, from your or someone else’s pet? Thank you for stopping by, as always.

17 thoughts on “What Writers Can Learn from the Housecat”