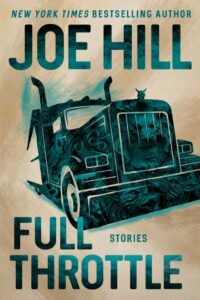 I spent a bit of this past week reading a newly published collection of shorter fiction titled FULL THROTTLE written by an author named Joe Hill. You may or may not know that Hill is one of the sons of authors Stephen and Tabitha King. It is a very generous volume with stories — his second, in addition to several novels — that stand smartly in the horror genre while dipping a toe or two into the fantasy, romance, mystery, and thriller genres as well. Hill, as it happens, is a magnificent author whose work has been or is being adapted to video for cable networks and streaming services. He is so good, in fact, that I believe that the stories in FULL THROTTLE may well mark a turning point of sorts that leads to the point where King will eventually become known as Joe Hill’s father instead of Hill being known as Stephen King’s son. Who becomes more famous than who, however, is not really the question that brings me here today.

Hill begins the festivities in FULL THROTTLE with an introduction titled “Who’s Your Daddy?” where he discusses growing up in a house where a child has a parent who is very, very good at what they do — who is a household name in other households besides their own — and what occurs when the child decides to make their mark in the same endeavor. “Who’s Your Daddy?” is a good sixteen pages long and rambles wonderfully in the manner of the best conversations. Hill along the way kind of/sort of answers the unspoken question of whether nature or nurture is responsible for his success. My take on what Hill says is that he is not a great writer because his parents were and are great writers so that he thus acquired his abilities by osmosis. No. If you read the lines and in between them Hill acknowledges that he is able to do what he does at the level he has accomplished because Stephen and Tabitha King are terrific parents.

Hill describes a bunch of things that formed the constellation of life in casa de King. Two of the many which stood out are that 1) Dad read to him, every night; 2) his folks rode through his difficult years with him; and 3) his parents supported his career choices every step of the way. Think about having Stephen King reading to you every night, as opposed to the reverse — you reading Stephen King — which many of us experienced. #2? Yes, those of us who grew from kids to parents have experienced both ends of that. Not all of us become great writers, however. Or necessarily great anythings. And #3? Maybe that is the biggie. It’s not just that Mr. and Mrs. King understood where their son wanted to go. They tossed him the keys to a car with a full tank of gas and let him know they had his six. That might be the most important element of all.

That brings us to the tip of the real key to Hill’s success. His parents couldn’t give him his talent, but supported his choices and let him make his own mistakes. What Hill also describes is writing, from the time that he could hold a pencil properly and knew what to do with the business end (jab it into someone’s eye, of course! EEEEEEEEEEEE!) (just kidding. I mean it is Joe Hill, after all). He mentions trying, unsuccessfully, to write in the style of The New Yorker, and composing three novels which were just never meant to be published. Hill also discusses his decision to adopt a pen name so that he wouldn’t get published because of who he is as opposed to what he is. Yes, some doors opened a little more quickly once his identity was revealed. Those same doors would have shut very quickly — heck, they would have slammed shut — if he did not have the goods, Hill wrote, wrote, and wrote some more before he ever had a word of his writing see the light of day. In addition to the books, movies, and television adaptations, Hill even has his own comic imprint coming very quickly from DC Comics, which doesn’t hand those things out like Frosty coupons at Halloween just because of who his (or anyone’s daddy is. No, Hill got there the same way his dad did, which was to sit and write every day and night — sometimes into the night — until he got close to where he wanted to be, and then he wrote some more. There is a theory that it takes ten thousand hours of practice to get really good at something. Maybe that is true, and maybe it’s something to remember when you feel in the middle of winter like you’re a monkey at a typewriter, hoping to randomly strike the keys and come up with Macbeth. In Hill’s case, his folks helped him out by giving him the tools he needed and staying out of his way by turns, according to what he needed.

That’s his story and I’m sticking to it. What say you? Which do you think has had a greater role in helping you get where you are, or where you are going? Nature or nurture? If I don’t reply immediately it will be because I am out buying my granddaughter art supplies. Have a great day, and thanks for being here.

22 thoughts on “Nurturing That Nature”