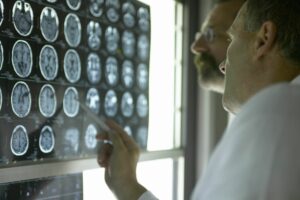 When I think about the personal challenges that thriller/mystery series protagonists are saddled with–particularly cops, psychologists, private detectives, and medical examiners–they tend to be emotional and psychological. Or the protagonists are alcoholics or drug addicts. (Sherlock Holmes? Wallander? House? I know, but House solves medical mysteries.) Or they’re irascible jerks who get away with being jerks because they always solve the crime. (Morse, and often Lynley.) Poirot was a fastidious little man, yet not nearly as annoying on the page as on the screen (only in comparison–I’m a fan of both).  Lord, save us from the oft-divorced investigator who’s been damaged by the death of a sibling or (an abusive) parent or has abandonment issues, drinks too much, and can only be saved by a good woman–only he won’t be saved because he always screws up his best opportunities. Then again, never mind. These guys have become tropes because they make good reading.

I confess I’ve read a lot more male investigator stories than female, written by men and women, both. Kate Atkinson’s Jackson Brodie, and Val McDermid’s Tony Hill are among my favorites. But when it comes to damage, it’s hard to compete with the devastating pasts of female protagonists Lisbeth Salander (Stief Larsson) and Kick Lanigan (Chelsea Cain).

As usual, I digress.

Psychological and emotional challenges are always interesting. But in the past week I listened obsessively to four novels in Michael Robotham’s Joe O’Loughlin series. Yes, I started with book number five, of eight. (I often start mid-series and eventually return to the beginning.) Joe O’Loughlin is a psychologist drawn into the profiling game. In addition to having the infidelity, alcohol, and relationship issues common to so many other (fictional) investigators, Joe has early-onset Parkinson’s disease. I find that a fascinating choice on Robotham’s part.

Parkinson’s is a degenerative disease of the central nervous system that has a survival rate of between 7 and 15 years. It affects men more often than women, and is marked by uncontrollable movements, late-stage dementia, and a host of other troubling symptoms. It’s not a disease that the sufferer can hide for very long.

O’Loughlin’s battle with the disease begins in the very first book of the series, and never ends or gives him a break. He’s suffering, and it negatively affects his marriage, work, and other relationships. More than once, it nearly costs him his life. It’s become a super villain he refers to as Mr. Parkinson, and it’s a villain he can’t fight beyond taking medication and making some lifestyle changes. There is no cure.

Today, a woman who served me lunch at a restaurant had the use of only her right arm, as her left had been amputated at the elbow. She did her job with alacrity and care. However it happened, she just deals. It must be incredibly difficult, but she makes it look easy. She is not fiction.

O’Loughlin is a fictional character about whom Robotham made a significant and possibly unique choice. As a psychologist, O’Loughlin is a character who’s used to guiding other people’s lives, yet he can’t even control his own body. Frustration layered over sadness over tragedy. The deck is, as they say, stacked against him. But isn’t that what excellent thrillers are all about? Ordinary people facing extraordinary odds. Robotham pulls it off.

I’m stymied as to other thrillers in which the protagonist has a significant physical challenge. Of course, there was Jimmy Stewart with his broken leg in Hitchcock’s adaptation of Cornell Woolrich’s REAR WINDOW. The break definitely intensified the story.

Can you name other stories/characters in which the writer severely challenged their main character?

Have you created similar situations in your own work?