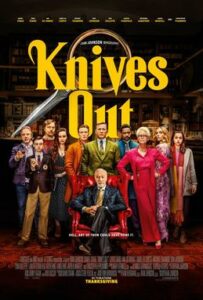 It is Thursday, September 19, 2019, as I write this. I had been working on my blog for Saturday, September 21 — what you who are reading this will call “today” — when I realized that it just wasn’t working. I started with the intent of presenting some suggestions concerning how to make good writing even better. Soon, however, I found myself discussing Miles Davis, Henry Kissinger, and Kurt Godel. That was all well and good, but I was meandering down multiple roads and decided to save that piece of work for another time.

Instead, I’m going to talk about a new movie titled Knives Out. An ad for it popped up while I was looking at knives online and I was quickly diverted. It is scheduled for wide-release in the United States on November 27, which by amazing coincidence is Thanksgiving Day this year. Knives Out is pertinent here because it is a mystery, dark comedy film about a fabulously successful crime novelist who invites his very dysfunctional family back home to help him celebrate his eighty-fifth birthday. The novelist is named Harlan (you’re laughing already) Thrombey who physically bears an uncanny resemblance to a popular thriller author who is not the one you are laughing about. Thrombey is murdered during the gathering and a police detective is called in to sort out who in his family did what.

Knives Out will almost immediately you in the mind of an Agatha Christie novel, and from what I have seen in the film’s trailers (which you can find links to here) it winks at its heritage — and thriller and mystery novels in general — several times. The camera lens glides over rows and rows of books (“Did I see one by Harlan Coben?!”). Thrombey, it is clear,  is a fan of A Game of Thrones, as demonstrated by a particular piece of decor in his home. I also don’t think that it is coincidental that one of the primary members of the cast happens to be associated with one of the most enduring characters in action film history, which in turn is based on a gold standard series of spy novels.

Oh. I mentioned the cast. Daniel Craig has a lead role. You will forget fairly quickly that he plays whats-his-name in the movies. Jamie Lee Curtis is here. Let’s talk for a minute about Jamie Lee Curtis. No one realizes how good an actress she is. Curtis played a lead role in a horror movie franchise that would have sunk the career of a lesser actress. Think about that. She’s still around because she is really, really good at what she does. Don Johnson. Yes, Don freakin’ Johnson, who in his seventies is still the coolest guy in the room, even when he’s not in the room. There are others. Check out the link to the website, above and you’ll see several million dollars worth of talent on the screen. There are supposed to be all sorts of theatrical easter eggs throughout the movie as well. I even learned that the viewers will actually be able to figure out whodunnit if they can identify five clues that are presented during the course of LIGHTS OUT and put them together correctly.

The primary reason I am psyched on KNIVES OUT, however, isn’t the cast, the scenery or the dialogue (which sounds exquisite from what I heard in the trailer). It’s not how wonderfully it’s staged and filmed, even though I jumped each of the three times that I saw the same two-second clip. The clip? It involves a cheek and…something else. No. What I love about KNIVES OUT is that it is about an author. Yes, he gets murdered, but he has lots of cool stuff in his house, seems to be a bit of a jerk, and is worth killing. He is interesting, in other words. Authors are interesting. They have to be to think up stories that are worth reading. It might not seem that way to everyone, but everyone doesn’t get to hide behind a palm tree the way that I did several years ago in a hotel lobby with a famous author, a really interesting author, who was trying to avoid a clinging, stalking fan. KNIVES OUT doesn’t look like it is quite up to that experience — what possibly could be? — but it is close. Check the website and trailers, and make your plans to see it in a couple of months at a multiplex near you. It will be showing in the theater with the line of grownups waiting to enter.

Are there any movies that you are looking forward to or any films about authors that you love? Let us know. And thanks for stopping by. You’re the best.